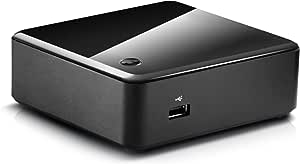 Mr. R. Maguire
5つ星のうち5.0 Not As I Imagined
2014年3月15日に英国でレビュー済み
Amazonで購入
I purchased this unit only to find I had received a different model to the one advertised, no Ethernet connection was the main problem. I used Amazon's service to contact the supplier who without and arguments gave me a full credit after I returned the item, even paying back the postage costs.

I still wanted a NUC, and so started searching again, this time I decided to go for a higher specification model with the i5 processor 4 x USB3 connectors, with HDMI and Thunderbolt connections as well, the Intel NUC Kit D54250WYK. It also had the possibility of a 4K connection through the Thunderbolt which sounded interesting for future use.

The cost was about £100 more, and then one has to add the memory, of which I added 8GB, and a SSD drive, which I added a 128Gb. I only use the SSD drive for programs and data to run the unit, and some temporary storage, all other data is stored on a removable 1TB USB drive, which was an additional expense. I have Windows 7 and Ubuntu loaded as the dual operating systems, although after using Ubuntu one seldom wants to return to Windows.

My reasons for buying this unit were twofold, it was very very small, and used a very small amount of power. On basic tasks about 6 to 8 watts, running hard about 35 watts. One problem I found immediately was that it would not run off my solar power system without a slight problem of the graphics jumping. I use an inverter to convert a 12 volt DC battery bank system to 230-240 volts AC, and have never had a unit that did not work off it. I will be replacing the inverter with a pure sine wave model which should cure the problem. Another problem I found was in booting the system, it seems to want a screen connected and the boot filing system being used needs to be set-up, once these setting are made it then boots up every time without any problems.

Unless you need the expandability of a large desktop cased system I would highly recommend these NUC units, the i5 one I have runs very fast, generates hardly any heat at all, and of course uses hardly any power. They are idea to update you TV to a full computer system, such as you might be used to, and can even be hidden away behind the TV. I use mine with a 24" monitor and the graphic, from the inbuilt graphics chip are very pleasing.

Some NUC units do not come with a mains lead for the transformer, this one DOES.
続きを読む
1人のお客様がこれが役に立ったと考えています
違反を報告
レビュー を日本語に翻訳する

SteveO...
5つ星のうち3.0 This is not the product pictured or described
2013年12月9日に英国でレビュー済み
Amazonで購入
Please note the picture and description relate to a different product; DC3217IYE.

The DC3217BY comes in a red topped case and has no ethernet port and only one HDMI port. However, it gains a Thunderbolt port. It's a fine enough piece of kit, so long as that's what you are expecting.

Three stars (neutral), because there is nothing intrinsically wrong with the product, other than it's not correctly described. The thing is, if the vendor can't get that right what else are they not getting right? Hmmm.
続きを読む
5人のお客様がこれが役に立ったと考えています
違反を報告
レビュー を日本語に翻訳する

Ray Hallam
5つ星のうち5.0 PLEASE NOTE: THE DESCRIPTION IS INCORRECT
2014年1月16日に英国でレビュー済み
Amazonで購入
A fantastic piece of hardware. If you are looking for a powerful, virtually silent, reliable and fast ultra small PC to replace a desktop, then look no further. Boots Windows 7 Pro in 15 seconds from a cold start to a functioning desktop.

The black model pictured is the DC3217IYE, **NOT THE BOXDC3217BY** which is red. The BOXDC3217BY unit does not have a network interface, you need to buy and install a separate WIFI device to connect this to a network.

Sonnet and Chuckles
5つ星のうち5.0 Awesome
2014年6月12日に英国でレビュー済み
Amazonで購入
I use this as the central computer in my home. It makes me feel like James Bond because it completes all sorts of automated tasks.