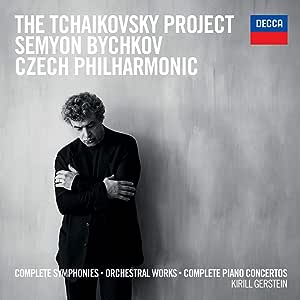 Angélica Ibáñez
5つ星のうち4.0 Tchaikovsky without the Fireworks, and a bit too restrained
2019年9月1日 - (Amazon.com)
Semyon Bychkov and the Czech Philharmonic tamed all of Tchaikovsky's titanic orchestral works, restraining and cleansing them from the usual conspicuous and gaudy approach. Here, every symphony is smooth and cohesive, and maybe just a bit too refined and rehearsed. Having that said, the biggest surprise here is the 1st piano concerto, where Kirill Gernstein replaces the rambunctious opening clashes on the piano with smooth and pleasant arpeggios. Moreover, the 1st movement of the serenade for strings is more arrested than Bychkov's earlier recording with the Berlin Philharmonic, and overall lacks the cry and despair from Karajan's 1967 recording also with the Berlin Philharmonic. All in all, a solid, well produced Tchaikovsky set for the open minded listener. Avoid this set if you dig a more bombastic Tchaikovsky.
続きを読む
18人のお客様がこれが役に立ったと考えています
レビュー を日本語に翻訳する

Cary Grant (nee Archibald Leach) once remarked, “Everyone wants to be Cary Grant. Even I want to be Cary Grant.” I get what he meant, and I suspect there must be a contingent of composers who, in one way or another, want to be Tchaikovsky. Perhaps they want to be trailed by adoring fans, strewing rose petals at their feet, shouting, “Maestro!” Maybe they want to bond with a man who made it into Carnegie Hall on the first attempt, without even having to practice. Most likely they want their music to be responsible for selling more season tickets than any other. Or maybe they just want to own a piece of Christmas. Just let me have all this for a few days, or weeks, or years. And please filter out all the mental illness stuff, I’ll never ask for anything more.
The current item is a seven-disc set of Tchaikovsky orchestral music; the overall title is The Tchaikovsky Project. Brilliant has had a lot of success with their omnibus offerings of such composers as Bach, Telemann, and Haydn. I own all three of these, and I’m very happy to have them. I’m doubly glad that Brilliant wasted no money with the packaging and performances, because they were so delightfully affordable. But when Decca produced this Tchaikovsky set, it went whole hog. These are new performances by the Czech Philharmonic and its new permanent conductor, Semyon Bychkov.
Many of us started our musical journeys with Tchaikovsky. I received my first complete symphony recording, the Tchaikovsky Fourth, around age five—12 enormous 78-rpm discs that flopped over the dimensions of my little plastic kiddie turntable. I’ve never been the same. I started side 1, and I was overwhelmed and terrified by that inevitable, unstoppable brass fanfare, coming at me, accusing me of things I knew I’d done but had no idea how Tchaikovsky found out. I couldn’t escape, so I gave up and let it wash over me. And then I started it again.
The great performances of the finer composers are still with us. But with each addition to the catalog, we have an opportunity to compare our favorites with the new guy. And thus we grow, we understand.
Here is the report on The Tchaikovsky Project. It won’t take long. The Czech Philharmonic playing Tchaikovsky with Semyon Bychkov has found the reason for its existence. No doubt there are always people who, each on their own journey, are approaching their encounter with great music. How lucky for those who do so via these magnificent performances! Their luck is threefold: first, the orchestra itself. As the composer (and master orchestrator), was conceiving this music, he must have been dreaming of an orchestra like the Czech. One really can’t make factual statements about this sort of thing—only opinions, hopefully informed ones. In these recordings I envision an ensemble who has reached an understanding of how this music should be played and is delighted by their ability to play it. Together always, with beautifully matching tone color and balance, and with an eagerness to contribute to the whole, they create one enormous virtuoso.
Next, the conductor. I can’t even begin to estimate how many times I have listened to the last three symphonies. But never have I experienced the kind of almost magical transparency achieved by Bychkov in these performances. He allows you to experience the same lovely melodies fully, the ones that have always sold this music and always will. But if the inner parts catch your interest, you can hear every part, every nuance. I heard so many things I never heard before, or at least wasn’t aware of. It truly was like listening to this music for the first time.
Finally, the sound engineering, clearly the third partner in the triumvirate. Many people were involved and credited, and all of them deserve an ovation; but in this case, I am moved to specify that the sound engineer was Stephan Reh.
Before I am carried away by paroxysms of praise (if it’s possible to be carried away by a paroxysm), a word about what even a set like this can’t do. It can’t contradict the rulings of the People’s Court. History has spoken about such items as the first three symphonies and the last two piano concertos, and they have given them the raspberry. Naturally, anything Tchaikovsky wrote is of interest, and the early symphonies especially so. It is fascinating to watch how the composer learns his craft. And there will probably not be any future performances better than these. But the glorious melodies that carried Tchaikovsky into the firmament are just not there. And Tchaikovsky without a glorious melody is like a matzo ball with Crisco instead of schmaltz.
Well, I’m sure that “Winter Dreams,” et al, will be included in future releases. The good news is: You get to listen to the CDs you want and to skip the CDs you don’t want. And I wouldn’t be surprised if The Tchaikovsky Project were to become the benchmark by which 21st-century Tchaikovsky is judged.