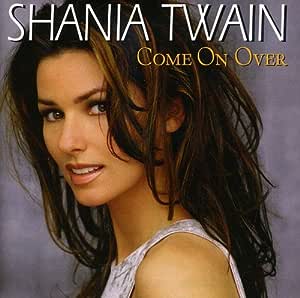 Following her recent Australian tour, Shania's "Come on Over" is re-released in Australia with 3 bonus tracks! Now containing 19 tracks, it features the hit single "(If You're Not in It for Love) I'm Outta Here" along with 2 remixes, "Love Gets Me Every Time" and "Don't Be Stupid (You Know I Love You)."

New Re-release Version. Now 19 Tracks Including Two Dance Remixes and a Live Version of 'if You're Not in it for Love, I'm Outta Here'.

Come On Over had three different releases. The original was released in 1997, followed up by an international version in 1998 and a revised edition in 1999. This review is based on the 1999 edition.

The album starts off on a slow pace with the soft country song, “You’re Still The One“, one of Twain’s more well known and better ballads. An odd choice for an album starter. Even though it is a great song it really gets off at and continues on a dull pace for a couple of song. Not because the songs themselves are boring, more the fact that starting with a ballad only to follow up with a country rock song and straight back into a ballad is a bit of a momentum killer. Make no mistake about it though, “When” and “From This Moment On” are great songs. Naturally, this album is well known for selling a horrific amount of singles for the tunes, “Man! I Feel Like A Woman!” and “That Don’t Impress Me Much!“. These two songs are a brilliant duo of songs, very memorable and never get old. Other memorable mentions are the bouncing country rocker “Don’t Be Stupid” and the extremely AC/DC “Love Gets Me Every Time“. The album really holds it’s own after the first three tracks. There is never a dull moment with the exception of the extremely cheesy and pointless “You’ve Got A Way” and the creepy “If You Wanna Touch Her, Ask!”

The production, again is extremely solid and full of life. Another superb job from Robert John “Mutt” Lange, even if his influences are a little obvious on some songs. Gigantic drum sounds, gang choruses and wailing guitars are no surprise considering his work previous Rock legends.

This album is no different to every other album Shania Twain has recorded. It is extremely lively and way too catchy to be ignored. It certainly beats the hell out of listening to rap!
続きを読む
2人のお客様がこれが役に立ったと考えています
違反を報告
レビュー を日本語に翻訳する

Savvynan
5つ星のうち5.0 Great to line dance to
2019年5月24日に英国でレビュー済み
Amazonで購入
I heard this cd played for the first time last weekend. Loved it got it. Great BBQ disc to line dance to. Fast delivery no problems.
続きを読む
違反を報告
レビュー を日本語に翻訳する

Clematis
5つ星のうち5.0 Excellent choice
2019年12月19日に英国でレビュー済み
Amazonで購入
Absolutely love every track.
This is my second purchase as the first one got damaged accidentally.
続きを読む
違反を報告
レビュー を日本語に翻訳する

Annakb
5つ星のうち5.0 Great album
2014年2月9日に英国でレビュー済み
Amazonで購入
Bought this (for the third time - managed to lose the other two copies because of house moves...) and love it just as much as I did the first time I heard it. Not a big fan of country and western music, but this is so much more. I've listened to some of her other albums, but none anywhere near as good as this one. You either love her or hate her..!
続きを読む
違反を報告
レビュー を日本語に翻訳する

TruthTelling777
5つ星のうち4.0 Shania Rocks
2014年12月19日に英国でレビュー済み
Amazonで購入
Great album from one of the top-selling female artists of all time. Have never been a particular fan of country music, but this CD changed my mind. Heard it while staying at a holiday cottage and decided I should buy one of my very own. Contains a good array of contemporary and funky tunes, mixed with more classic country-type tracks. Great buy and an iconic CD.
続きを読む
違反を報告
レビュー を日本語に翻訳する
すべてのレビューを参照します
Amazonプライム会員ならお急ぎ便、日時指定便が使い放題
さらに、映画もTV番組も見放題。200万曲が聴き放題 。クラウドに好きなだけ写真も保存可能。
> プライムを無料で試す