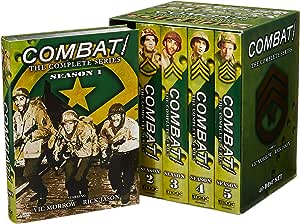 They always start out with “staring Rick Jason and Vic Morrow.” Instead of great sweeping epics this program focuses on a single squad with their trials and tribulation with confronting the Germans in WWII. Each episode is one hour and has to oppose a problem and a solution in that time. This was back in the time of professional privates.

In 1967-1968 Vietnam if you were lucky certain areas actually had TV broadcasting at 1600 hrs. You guessed it; this was one of the programs. I wonderer what the locals thought of the episode?

This would be a good series to own. Not just for the nostalgia, but the personal conflicts portrait in the program are still with us today.

Tom T.
5つ星のうち5.0 Five Stars
2018年5月11日にカナダでレビュー済み
Amazonで購入
One of my favorite shows growing up, discovering episodes that I have not seen. Some damage to the packaging but the DVDs were fine
続きを読む
1人のお客様がこれが役に立ったと考えています
違反を報告
レビュー を日本語に翻訳する

K. Hollingshead
5つ星のうち5.0 Super fast delivery
2018年8月21日にカナダでレビュー済み
Amazonで購入
Item arrived earlier than estimate! So far quality of disks is good, one froze half-way through one episode. Disk holders are not well made, hinges are falling apart. Great to see this series from my youth, lots of memories!
続きを読む
違反を報告
レビュー を日本語に翻訳する

Lloyd Dole
5つ星のうち5.0 Perfectly restored for DVD.A must have for all fans of the best TV war series.
2013年2月17日にカナダでレビュー済み
Amazonで購入
You must remember this,sitting with your WW2 veteran Dad and absorbing the travails of Sgt.Saunders Lt. Hanley,Kirby,Cage,Doc and Littlejohn.A real time trip back to an ahead of it's time production.Vic Morrow especially stands out as a vastly under-appreciated actor. A superb look back at the Greatest Generation saving the world.Nothing dated about this classic.A TV show filled with movie production values.
続きを読む
6人のお客様がこれが役に立ったと考えています
違反を報告
レビュー を日本語に翻訳する