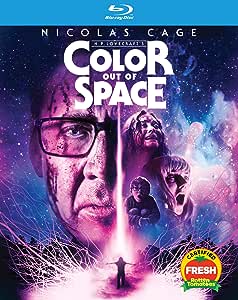 Color Out of Space [Blu-ray]

Sean Parkinson
5つ星のうち5.0 True Lovecraft + Unbridled Nic Cage + Alpacas
2020年1月24日 - (Amazon.com)
Has the pleasure of seeing this at the Alamo Drafthouse near me. The movie is remarkably true to the key story points and while the performances are over the top, Richard Stanley captures the dread and charm of Lovecraft in a way I've not seen before. There are a few elements that felt extraneous and felt a bit indulgent for my tastes, but I cannot wait to see Spectrevision and Stanley put together the Dunwich Horror and whatever the third film in his Lovecraft Trilogy might be. Also, I hope you like alpacas, as they feature prominently in this film.
続きを読む
35人のお客様がこれが役に立ったと考えています
レビュー を日本語に翻訳する

aaron moore
5つ星のうち5.0 As good as Lovecraft has been done in film.
2020年2月26日 - (Amazon.com)
Amazonで購入
Unfortunately it still suffers from a few problems that for me, were hard to get past. For one, anyone even remotely familiar knows, as soon as they see "Based on the story by H.P. Lovecraft," that the meteor is a harbinger for some ancient evil god that defies human conception. You're five minutes into the movie and there's nothing to figure out, even if you have never read Color Out of Space. Second, is this trying to be a horror movie? I never really felt a sense of dread. Monster reveals were too early and in too full detail. Is Lovecraft even supposed to be frightening? Third, some of the visual effects which could have really contributed to the experience were poorly done, especially the vision at the end of the film.

But, forgiving all of that, this is still the best that Lovecraft has ever been done on screen. Nick Cage is hilarious early in the movie. And most of the flaws that people will point too arise directly from the difficulty in trying to migrate Lovecraft from writing to cinema. My 5 star review is a vote for more high budget Lovecraft movies.

Steven
5つ星のうち4.0 Fantastic Film & My Favorite HPL Adaptation
2020年1月27日 - (Amazon.com)
I love the works of HPL and the mythos around them. A problem for me has always been the adaptations that have come from his work as I find 99% of them to be awful or nothing like the source material they are based on. "The Color Out of Space" is, in my opinion, a return to form for HPL adaptations AND for writer/director Richard Stanley.

I loved every minute of this film and thought it did a great job updating the story that takes place around 100 years prior to today. The cinematography, the use of lines from the actual story, the tone, the references to the rest of "Lovecraft Country", the performances, and the actual horror were all great. I will definitely be buying the BD when its released in Feb and I hope it comes with plenty of extras and commentary.

I saw this film at Central Cinema in Knoxville, TN

joel wing
5つ星のうち2.0 The movie warns don't drink the water but the story wasn't interesting enough to care
2020年1月26日 - (Amazon.com)
Color Out of Space was based upon a story by H.P. Lovecraft, the celebrated American horror-science fiction writer. The story revolves around a family that live out in the woods who happen to have a meteor crash into their backyard. It infects the water and completely distorts reality for everyone involved. The movie is very mixed and will likely have people love it and hate it as well.

Here’s the good. The story is very original. There are mixes of great visuals and horror mixed in together. Nicolas Cage who plays the father Nathan gets to play crazy and does a great job, and the daughter Lavinia played by Madeleine Arthur is a standout as well.

The problem for me was that I never felt a connection to the film. Even when things started getting weird, which I usually like it just didn’t get me interested enough to care. The only redeeming quality was to watch Cage go nuts which is always fun, otherwise the movie did very little for me.
続きを読む
18人のお客様がこれが役に立ったと考えています
レビュー を日本語に翻訳する

Sean Wandersee
5つ星のうち5.0 John Carpenters’ Old McDonald Had a Farm
2020年1月30日 - (Amazon.com)
When a meteorite crashes into the Gardener Farm Eldritch Horrors escape and infect the family with its colorful evil.

Doing Lovecraft right is a tricky thing mostly because his horrors are usually unseen terrors that you only catch a glimpse of before going punching your ticket for the rubber room. Richard Stanley does a great job of teasing the horror and never really giving you more than a few horrifying glimpses of slimy otherworldly mutations. The few tastes you get are just enough you want to see more but never enough to dull you to the horror. The effects are really good and setup well. There is a scene just as the crazy ball starts rolling that had me wincing waiting for the knife to drop. Nicholas Cage is an excellent fit for the role with his dial to 11 mania but my favorite was Tommy Chong as the old hippie in the woods, Gotta Get It on Memorex. There really needs to be an entire movie series of Tommy Chong Harbinger of Doom. Fans of Lovecraft and fans of Horror in general will finds tons to love about this high energy thrill ride through the natural world run amok. Watch out for the Alpacas, those beady little eyes are watching you too.
続きを読む
18人のお客様がこれが役に立ったと考えています
レビュー を日本語に翻訳する
Amazon.comのカスタマーレビューを見る(28) 5つ星のうち4.1
Amazonプライム会員ならお急ぎ便、日時指定便が使い放題
さらに、映画もTV番組も見放題。200万曲が聴き放題 。クラウドに好きなだけ写真も保存可能。
> プライムを無料で試す