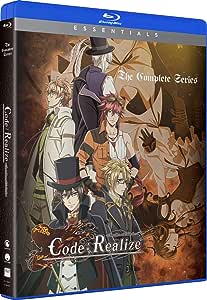 KatieJ
5つ星のうち5.0 Great story!
2019年3月12日 - (Amazon.com)
Amazonで購入
Great animation and stuck very closely to the Lupin story line. Just sad you couldn't see the others but grateful for it being made at all ♡♡♡ love this story so much!
続きを読む
2人のお客様がこれが役に立ったと考えています
レビュー を日本語に翻訳する

Julia
5つ星のうち4.0 A good intro to the VNs
2019年6月3日 - (Amazon.com)
I could just say "go play the game" ... but I enjoyed this series to the end. Sadly, there are no OVAs of other routes; only Lupin and Lupin only. So, if you are a fan of Lupin, this will be a great treat! There aren't that much in terms of special features or extras; mainly the anime and it's only for a half a day if you decide to binge-watch.

In my opinion, I thought the anime did a great job to highlight the relationships between the five men that become central to Cardia's life. Another highlight was bringing more to Cardia as a character in her animation, giving her a talking voice; it just adds a bit more to her than what the game could allow. There were subtle changes in the voice acting that I picked up to show how she was progressing as a character like I imagined her to be. Also, it gives you a chance to hear the male voice actors show off more of their awesome skills.

The anime tries to give each men a moment to shine, but due to the shortened length of the run-time and demand to move the plot along, rest of the characters do not feel fleshed out as in the game (expected but still sad). One thing that kind of irked me was how the anime transitioned from one plot to the next. It skipped a lot of plot points from the game. It felt rushed and had me scratching my head sometimes (oh wow, we are there NOW?).

Lots of flare, cute moments, but lacks substance to the original game as with any adaptations. If you have not played the game but were curious but do not have the time, then I do recommend this anime as a start.