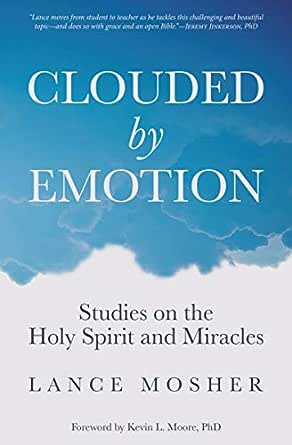 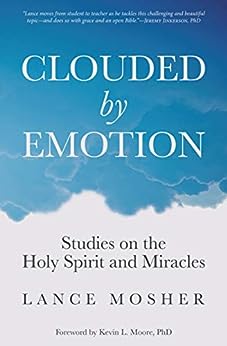 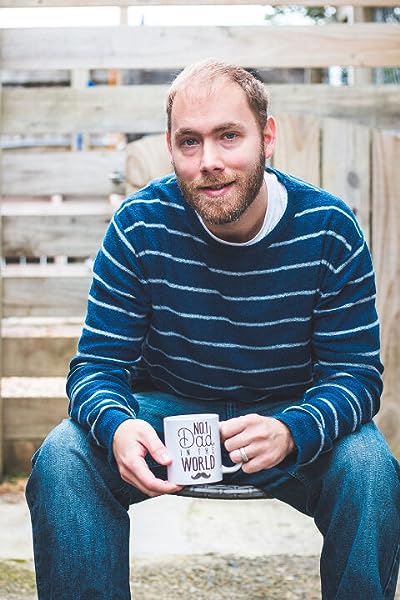 Clouded by Emotion: Studies on the Holy Spirit and Miracles (English Edition) Kindle版

Carl Jenkins
5つ星のうち2.0 Goes from one extreme to another, ultimately denying God's strength in favor of your own.
2019年12月9日にアメリカ合衆国でレビュー済み
Amazonで購入
While this book does some things right, overall I was left less than impressed with the conclusions and use of scripture in dealing with this topic. It feels like the book was written to address one part of a broader Christianity, the highly charismatic group that the author seems to have come from, but marketed towards a much wider audience. One of the major problems stems from the title itself, a concern I've expressed to the author before reading, that was confirmed in my reading. Though the author does express the sentiment that he is not a final authority and can be wrong, the book is scattered with the sentiment suggested in the title, that if you disagree with his conclusions you are simply "clouded by emotions" and relying on your feelings and desires rather than the scriptures. Though likely not intended, the constant reminder that disagreement equals being "clouded by emotion," left an interesting response to the book whenever I questioned Lance's use of various texts.

The first two chapters are a good, general overview of who the Holy Spirit is, and His place within the Godhead. Once you get into more of the particulars, it ended up being the same, in my opinion, shallow and faulty arguments by many in the Churches of Christ (of which I am a part) to try to argue that the Holy Spirit only operates on or affects people through reading and studying scripture. While I do believe that the Holy Spirit does not directly convict a non-believer into repentance and salvation apart from the word, the scripture seems quite clear to me that the indwelling of the Spirit works alongside the scripture to help believers grow, mature in Christ, be moved to repentance, and better understand the scripture. I'll provide some examples of where I believe the book falls flat in explaining scripture.

One instance is in the second chapter where Lance argues that in John 14-16 the promises concerning the Holy Spirit ONLY apply to the apostles because Jesus was speaking to them and said "you" in the scripture. I understand the argument, but there is rarely consistency in applying this to other times where Jesus says "you" and we have no problem applying to others, and later Lance uses Mark 16 and the promise Jesus says is to be given to "those who believe" yet Lance decides to only apply it to a small and select group, so there is certainly a lack of consistency and Lance never really explains why that lack of consistency is there.

In chapter 3, Lance claims that those who are faith healers are mocking Jesus, and asks why they don't go to hospitals and heal all of the patients there, only to turn in the next sentence and admit that Jesus didn't do anything of the sort either. Right or wrong, why hold these men to a different standard than Jesus and condemn them for it, especially if you contradict that standard in the next sentence? On top of that, the faith healers seem to match up with all of the reasons Lance says miracles were done.

He also makes the claim that miracles primary purpose was to "confirm the message," and once the New Testament scripture was "confirmed" (meaning completed) there is no more need for miracles. That seems to be one reason they are sometimes done, but there is a failure to address some things, such as why, if the prophets were pointing people back to the confirmed Law of Moses in their preaching, why they often did miracles? He does point to the end of the book of John where the author says "these things were written so you might believe" but frames it in a much more modern frame. The people originally reading the text wouldn't have had a difficult time believing in miracles, and even today its a bit problematic as it simply insinuates that because the Bible says they happened we should believe them, which isn't going to get very far with many who don't believe miracles could happen. Rather the context seems to be pointing to the fact that these miracles pointed to Jesus as the Messiah, specific types of miracles, not just to "confirm the message." We also have miracles being done in scripture simply because Jesus has compassion on people and cares about them and wants them to be healed. If miracles primary purpose in the ministry of Jesus was just to confirm His message, the abundance of them should be a bit shocking, but one has to limit miracles to this context to reach the end goal the book is trying to achieve. This is seen in chapter 7 concerning apostles as well, claiming that if God's word is available then miracles are not needed, yet to reiterate it begs the question of why many prophets performed miracles with the Law of Moses was confirmed.

Lance tries to establish a case in chapter 9 that because we have the "confirmed word" then desiring miracles or spiritual gifts is a sign of immaturity. He quotes 2 Peter 1:2-4 and concludes that "Peter told the Christians they had access to everything needed for true knowledge and godliness." The problem is that the text doesn't say that. Peter simply says that "His divine power has granted to us everything pertaining to life and godliness, through the true knowledge of Him..." Well of course this was before the scripture of the New Testament was even completed so we run into a few problem's with Lance's argument with that verse. He also turns to 1 Corinthians 13 to build this argument given that it discusses 3 of the spiritual gifts (prophecy, tongues, and knowledge) will pass away. He argues that "the perfect" has to be the completed scripture because the text says that hope, hope, and love will continue, and then only love and that "the perfect" can't be the return of Christ because faith and hope won't continue after that as they will be fulfilled. The problem is that the text never claims that faith, hope, and love will continue after these pass away and the the perfect comes. It simply says that faith, hope, and love abide and the greatest is love. His interpretation adds a lot to the text that isn't there, and one has to wonder why? Paul simply states that faith hope and love are currently abiding, telling the Corinthians to center their lives around faith, hope, and love rather than these spiritual gifts.

There are a few instances of misconstruing statements made by those who believe differently as well, such as dealing with people who pray for the Spirit to "come" into a situation, asking why they need to pray for the Spirit if the Spirit already indwells within them? It seems to be no different than praying for God to do something in a situation as if God is not already aware of what is going on and isn't already at work in some way. Rather we are asking the God who is already at work to work in a certain way towards a certain outcome. It's no different than asking for God to, in the way He chooses, to strengthen us, to give us opportunities to grow, or help us to be more faithful, but for some reason asking that of the Spirit is just indication.

The ultimate conclusion of the book is that the Holy Spirit really only operates on the Christian (he addresses sinners as well, but I believe the conclusion about the Spirit in the lives of Christians is of more difference between us and of concern), through reading and applying the scripture. I believe this is very problematic, primarily because it really only means our growth as Christians is reliant on our own hard work and effort. It's a soft-core version of Deism where God does his work through Jesus, has the Spirit deliver the scripture, and outside of the Spirit praying on our behalf He does nothing else for us because we have scripture. Basically everything is dependent on how hard we work towards getting better. But for Lance's argument there are only two options seemingly available. Either the Spirit does essentially nothing, or the Spirit seemingly takes over our bodies and operates just on good feelings and emotions. This is why I began the review as I did about the intended audience, Lance is highly lacking in nuance about what most people teach or believe about the work of the Spirit in the life of a Christian. There is no room it seems, in his theology, for the Spirit to work in a nuanced way in which, along with our study of scripture, the indwelling Spirit can move us towards repentance, can strengthen us is faithful walking with God, or can help us understand some aspect of scripture or how we should respond to a specific issue in which the scripture might address broadly, but not specifically.

While I share many of the same concerns Lance has for the extremely charismatic Christians and a reliance on feelings over scripture, my bigger concern is that he has moved away from that to the extreme on the other side of the pendulum, and encourages others to join him, in a position that shuts us off from the help that God gives us through the Holy Spirit as we also devote ourselves to scripture. Towards a position that relies more on one's own self and understanding that God's strength and gracious gift.

*I've edited my review to remove a section about his chapter on apostles. A concern I had was in the footnotes which I had missed and thus have no place in the review.*

Olivia M. Helton
5つ星のうち5.0 A one-on-one Bible study like no other
2019年12月3日にアメリカ合衆国でレビュー済み
Amazonで購入
There is no denying the truth that is found in this book because every word is backed by Scripture. I love how he quotes scripture regularly throughout the entire book. I also like how in the audiobook he adds when is a good time to pause and dig into more scripture with book, chapter, and verse references. It's like a one on one Bible study with Lance (the author). He just does such a wonderful job explaining things to people who get confused and overwhelmed easily by Biblical matters. Sometimes I find myself clouded by emotion and it's nice to find a book that digs into deeper Biblical matters that I have a hard time making sense of at times when I study alone. I especially love how sensitive he is to the reader. He makes it very clear that his intentions are to educate the reader through love, compassion, and an understanding heart. His love for Christ is shown through his gentle yet bold explainations. I particularly love how he explains why miracles do not exist today. I also love how he includes part of his past and how it pushed him to dig into the Word and find the real truth for himself.
続きを読む
3人のお客様がこれが役に立ったと考えています
違反を報告
レビュー を日本語に翻訳する

Gary Lyons
5つ星のうち5.0 Emotion vs. Facts!
2020年2月25日にアメリカ合衆国でレビュー済み
Amazonで購入
Lance did a great job of clearly laying out what the Bible has to say about this timeless subject. Lance brings wisdom and a good grasp of the Bible to this book. Every person who has questions about religious practices concerning the Holy Spirit of God should read this book. It will answer a lot of oft-asked questions...to those who are searching for answers.
続きを読む
1人のお客様がこれが役に立ったと考えています
違反を報告
レビュー を日本語に翻訳する
すべてのレビューを参照します
トップへ戻る
Amazonについて
Amazonでビジネス
Amazonでのお支払い
ヘルプ＆ガイド
日本語ショッピングのための言語を選択します。 日本ショッピングのための国/地域を選択します。
© 1996-2020, Amazon.com, Inc. or its affiliates