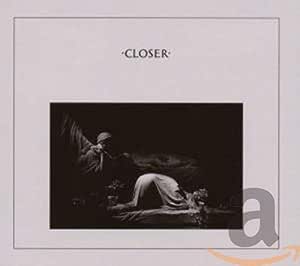 2007 digitally remastered and expanded two CD edition of the influential Manchester quartet's 1980 album. Joy Division's influence on modern music is not only based around the band's unique sound, but also their vision, their personalities and their intense and troubled vocalist, Ian Curtis who committed suicide on the eve of their first tour of the U.S. Disc One features the original album containing nine tracks including 'Heart And Soul', 'Isolation' and 'Passover'. Disc Two features 11 tracks recorded live at ULU in February of 1980. Rhino UK.

2007 digitally remastered and expanded two CD edition of the influential Manchester quartet's 1980 album. Joy Division's influence on modern music is not only based around the band's unique sound, but also their vision, their personalities and their intense and troubled vocalist, Ian Curtis who committed suicide on the eve of their first tour of the U.S. Disc One features the original album containing nine tracks including 'Heart And Soul', 'Isolation' and 'Passover'. Disc Two features 11 tracks recorded live at ULU in February of 1980. Rhino UK.

William J. Fox
5つ星のうち5.0 Unexpected Pleasures
2014年1月15日に英国でレビュー済み
Amazonで購入
(Collector's Edition reviewed)
In my opinion, the best of the three official albums. It opens with the uncompromising bass and drums of "Atrocity Exhibition". The percussion is speared by tortured guitars and then Curtis sings: "This is the way, step inside..." It is surprisingly danceable, like many of their songs. If you hadn't realised that Curtis was a fan of J.G. Ballard then you have missed something very important about is lyrics and ideas.

"Isolation" is slightly different from many Joy Division songs because it includes a synthesiser for lead instead of guitar. In hindsight it is possible to pick up on Ian's despair from his lyrics although sometimes I find the titles more interesting than the accompanying verses. Again there is a good dance beat.

The pace slows for "Passover" and we are back to bass, drums and high pitched lead guitar. In some ways a lighter track until the lyrics open with lines like "It all falls apart at first touch".

"A Means to an End" originally closed the with a catchy hook on the lead guitar, powered along by the bass and drums. A cymbal beat punctuates the song, "I put my trust in you." I've been there myself.

"Heart and Soul" originally opened side two of the album. The bass pulses as a backdrop to catchy drums and lead before Curtis begins to sing. "Heart and Soul, one will burn", and it does, Joy Division fiddles while Curtis burns.

The pace slows again for the opening "Twenty Four Hours" but it gradually builds up into a relentless driving wall of guitar, drums and bass, until Curtis breaks in with the lyrics "So this is permanence, love's shattered pride". I know what he means, just when things seem to be getting stable, the ground swallows you up.

Much slower than the rest of the album "The Eternal" hisses into being. Curtis' voice is surprisingly soft and mellow with subdued bass and drums easing the track along. Again there is a touch of very melancholy keyboards, this time a piano plaintively tinkles int he background. He seems to reveal an ambivalent attitude towards children in the lyrics, but perhaps he is referring to all humans "With children my time is so wastefully spent, A burden to keep through their inner communion, accept like a curse an unlucky deal".

A melancholy synth litters the closing track, "Decades", a very down beat sound eased along by the bass and percussion. "Here are the young men, the weight on their shoulders/ where have they been?" Does it get any worse? We'll never know now will we? The track always brings a lump to my throat anyway.

The production quality and musicianship of the album, a remastered version, is excellent, clear at all frequencies and well balanced between hitting you in the ears and punching you in the gut. I think Ian would have approved of the newer version.

The bonus disk was recorded live at the University of London Union on February 8th 1980, making it 34 years old as I reviewed it. I assume most fans will have an assortment of Joy Division live recordings and this official release is better than many of them. The track listing includes one of my personal favourites "Dead Souls".

In all an essential record for fans although it is far from easy listening.
続きを読む
13人のお客様がこれが役に立ったと考えています
違反を報告
レビュー を日本語に翻訳する

john
5つ星のうち5.0 Fantastic final album
2016年7月3日に英国でレビュー済み
Amazonで購入
I've not stopped playing this album since I bought it. It's a great follow up to unknown pleasures. Both are way ahead of their time. Fantastic lyrics which are both tragic and cryptic. By listening you can hear the end is near. An introduction to keyboards on this second offering brings more to the album. The second disc which is a live offering is also worth owning, it gives a great feel of what the band were like live and in their prime. Those that were there are lucky.
続きを読む
1人のお客様がこれが役に立ったと考えています
違反を報告
レビュー を日本語に翻訳する