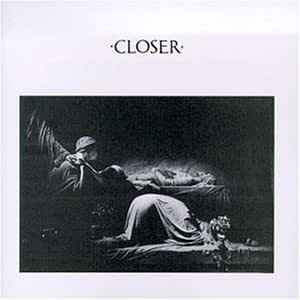 In retrospect, Closer, the second and final album by this Mancunian band, seems to point straight at singer Ian Curtis's suicide, which happened a few months before it was released. The band's reverberating mesh of minor-key lines and Curtis's bass voice are gloomy enough on their own, and attention to the words reveals references to blacker-than-black stories by JG Ballard and Joseph Conrad; the void and its terrors were splitting Curtis apart from the inside. "I put my trust in you," he sings, and his voice leaves no doubt that that trust has been betrayed. But the music, grim and powerful as it is, points to the direction the surviving members took as New Order, incorporating the mechanical gravity of club rhythms. --Douglas Wolk

tick tock
5つ星のうち5.0 Do Not buy a JD best of album.Buy the originals,or lose out.
2018年11月28日に英国でレビュー済み
Amazonで購入
Quite simply one of the best british albums released,ever.
In this day-and-age of itunes,personal playlists,and tracks it is quite easy to isolate one track or the other and,at best,opt to buy a 'greatest hits' album.
Don't
If ever there was a band where one should invest in the original albums,then it is Joy Division.
Why?
Because to listen to Closer from start to finish is to experience a body of music as pure, expressive art.
The sound of desperation.Appalling beauty.Sheer,naked desperation.
I cannot think of an album that lays itself so bare to the listener
Its bleakness is direct
It pulls no punches and does not spare the listener from its raw emotion.
Remember......play from beginning to end.
An album to really listen hard to.Probably not at a party.More of a rainy day album looking out of your window.
Incredible.
続きを読む
3人のお客様がこれが役に立ったと考えています
違反を報告
レビュー を日本語に翻訳する

From the jagged, edgy opening of "Atrocity Exhibition", with its addictive drum rhythm and grinding guitar interjections, and the dour, self-explanatory and very atmospheric "Isolation", this is an even more challenging album than their debut from the previous year, "Unknown Pleasures". The group push the "post-punk" boundaries even further into the realms of paranoid introspection. They really were a perplexing, inventive group. Yes there were others with the a similar sound and dour image, but none did it quite so genuinely disturbingly as Joy Division. I have to say that "Atrocity Exhibition", turned up loud, sounds marvellous. Totally infectious.

Tracks like "Passover" are classic examples of the Joy Division sound - pounding, doleful drums, big rumbling bass, mysterious keyboards and quirky vocals. It is one of the album's best cuts. "Colony" ploughs the same furrow. As also does the ghostly "A Means To An End". It is all pretty unnerving stuff. They sort of re-wrote what "rock" music, whatever you call it, was about. Out in the charts in 1980, there was effervescent, tuneful new wave material, lively, joyful ska, commercial reggae and poppy disco-ish stuff was still around. All of this was a world away from Joy Division. After singer Ian Curtis's untimely death, they regrouped as New Order and continued in the same vein until it was clear they couldn't keep putting out stuff like this and reinvented themselves as an upbeat, positive dance music group, mastering that particular genre. The seeds were sown here, though, just listen to that intoxicating bass line on the beguiling "Heart And Soul" and the metronomic drum sound too. This material influenced so many subsequent bands, both in the post punk genre and the dance music boom beyond.

There is more sumptuous, industrial bass on "Twenty Four Hours". Despite being very adventurous in the UK in 1979-80, this is all very much created under the influence of the Krautrock German bands - Kraftwerk, Neu! and Can and, of course, David Bowie's late seventies work, although he never was as gloomy as this. A sombre, insistent track like "The Eternal" is rock noir, if there was such a thing. Deep and dark. The only thing coming close at the time was Talking Heads' "The Overload". "Decades" is very similar. This album, if anything, was even more dour than its predecessor. Beautifully dour, at times, however. Personally I quite like an occasional half hour or so of it. It sort of gets into your system. I wouldn't want to listen to little else, though.

The 2007 remasters of both albums are excellent, too. The bass sound is really highlighted and there is a warmth and depth to the sound.
続きを読む
1人のお客様がこれが役に立ったと考えています
違反を報告
レビュー を日本語に翻訳する

Prof Whiteside
5つ星のうち5.0 What can I say?
2007年10月23日に英国でレビュー済み
Amazonで購入
Its hard to explain the immense weight of this composition, especially in the light of the multitude of adoring fans who have seen fit to quite rightly accord this piece 5 stars.
Objectively as a piece of music this work is definitive and masterful. It is painfully revealing and oozes the desperation of a tortured and confused soul who went on to engineer his own infamy in a carefully planned suicide. Whilst the album uncomfortably states the state of mind of the composer, the work of Messers Hook and Sumner are phenomenal. The greater allocation of auditory time to both bass and drums has allowed both Morris and Hook to blossom and never have I heard such an integrated perfection of those two instruments put down on tape. This is a powerful, solemn piece of work which hints at genius, especially with the likes of Isolation, Means To An End and my personal favourite, Decades. It is interesting to note that this album does not listen well split up, but is infinitely better listened to from beginnning to end. Just remember to take a happy pill after.
続きを読む
3人のお客様がこれが役に立ったと考えています
違反を報告
レビュー を日本語に翻訳する

Steve
5つ星のうち5.0 British Masterpiece
2016年9月21日に英国でレビュー済み
Amazonで購入
Hated it at the time it was released and never bought it then. It is kind of morbid. But times change and tastes change and I love this now. The 2007 film "Control", regardless of its authenticity, definitely altered my view of the band and its works and enabled me to appreciate this album.
British masterpiece.
続きを読む
2人のお客様がこれが役に立ったと考えています
違反を報告
レビュー を日本語に翻訳する