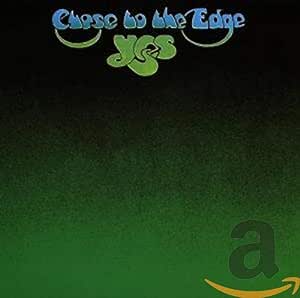 Close to the Edge

B.A.S.
5つ星のうち5.0 Head straight through leftfeld till you're Close To The Edge
2016年4月9日に英国でレビュー済み
Amazonで購入
It's albums like Close To The Edge that make you consider why Prog has such a bad rep. After a few listens, or even a few hundred, you'll still be asking yourself how they made 40 minutes of coherent music comprising so many apparently conflicting sections and wondering: has an album ever been named so appropriately? Yet, like a Picasso jigsaw - yes, a Picasso jigsaw, not a jigsaw of Picasso - it all fits together perfectly, if a little abstractly.
And You And I drops from strummy folk to a Beatlesy bridge, a reggae beat to an apocalyptic electronic climax. Close To The Edge, the track itself, is not so much a musical melange of surging psychedelia, funk, Byrds-influenced harmonies and a church organ, as the sound of falling through the universe. At this point it's worth remembering that this album was actually a massive hit pretty well everywhere, a sobering thought in these musically conservative times. Siberian Khatru is the most 'normal' rock track here, but every harpsichord, Eastern stringed instrument and vocal harmony elevates it to greater and greater heights, until the cascading voices collide on a 'river flowing right on over my head' and you are left in no doubt about exactly how that feels.
The album was released during that sweet spot just before production started sounding messy and ambition either ran out or ran riot, but whatever you think about Prog, this album will always sound uniquely like that point between the end of the known and the beginning of the unknown: Close To The Edge.
続きを読む
44人のお客様がこれが役に立ったと考えています
違反を報告
レビュー を日本語に翻訳する

Brian G
5つ星のうち5.0 One of my all time favourites. Remastered version is excellent. Sound quality is excellent.
2019年8月16日に英国でレビュー済み
Amazonで購入
My first purchase of Yes was way,way back in the mists of time. It was their double vinyl release Yessongs. From that point in time I was hooked. My next vinyl purchase was this CD. This had become one of my favourite Yes releases. I love it for its majesty and expansive sounds and style.
Whenever I listened to my vinyl copy of this,it used to send shivers down my back. I have an earlier release of Close to the Edge ,which stated remastered. This version is streets ahead of that one. A big shout out to the engineers for this release. To have the bonus tracks is really nice. All in all I would say this one to have. It is inevitable that because Yes have such an extensive catalogue of music, there will be some duds out there. This is not the case with this CD.
続きを読む
7人のお客様がこれが役に立ったと考えています
違反を報告
レビュー を日本語に翻訳する

Sweet Acid
5つ星のうち5.0 Yes, Yes, Yes
2015年5月12日に英国でレビュー済み
Amazonで購入
This is a staggering work of genius - and I don't even particularly like Yes! The swirling melodies, Anderson's strange voice and equally "out there" lyrics are underpinned by such solid and inspired musicianship that it makes for a magnificent whole. Notable for Rick Wakeman's first full outing with the band and what an addition he is. He may have played the part of the cantakerous Jester of Rock for all these years but he is a mighty fine keyboard player. Chuck in Steve Howe's terrific guitar playing , the jazz sensibilities of Bill Bruford and Chris Squire's bass runs and you have an essential rock album where in this instance individual ego has not been allowed to sully the overall sound. And it even comes packaged in one of Roger Dean's overrated covers and often with a bonus track of Yes playing Simon and Garfunkel's America - which is intriguing.
続きを読む
13人のお客様がこれが役に立ったと考えています
違反を報告
レビュー を日本語に翻訳する

Anglian Traveller
5つ星のうち5.0 Close to the edge of perfection, this 40-year old classic is still fresh as a summer morning
2012年12月13日に英国でレビュー済み
Amazonで購入
Yes' astounding 1972 album is the peak of the band's most creative period, the defining creation of the quintessential Anderson-Squire-Bruford-Howe-Wakeman line-up. The original album contained only the 20-minute title track plus two other pieces of around 10-minutes each: the beautiful `And You and I' and the fast-paced, foot-tapping `Siberian Khatru.'

The title track is a fine example of jazz-rock fusion, symphonic in structure (i.e. 4 `movements' finally returning to the main theme) with a collection of fine melodies, tight and often funky playing through time-switches & key-changes, compositionally outstanding & perfect in execution. It's a masterpiece, the apotheosis of the `prog' genre.

The best way to characterize Jon Anderson's enigmatic lyrics, such an essential part of that distinctive `Yes sound', is as a kind of expressionist art painting bright colours on a big canvas, describing shapes you can never quite define. The lyrics of most pop/rock/jazz music are buy contrast more literal-realist, less imaginative.

A real `feel-good' factor pervades the music of CTTE. It's upbeat, and passages often contain that tinge of humour (musical, not lyrical) sometimes found in the work of accomplished artists entering a more mature period of greater confidence in what they can do. There is no weak link in this chain: all five musicians weave a kind of magic together, each essential to the whole.

The 2003 re-master is exquisite, the original 16-track analogue recordings sharp with an unexpectedly `warm' sound. You get plenty of extra material, all of it good: the single version of `America' (much shorter than the full-on 10-minute version); a single of the `Total Mass Retain' movement from CTTE; a nice alternate `And You and I' & a studio-runthru' of `Siberia', less polished than the album version. Roger Dean's tasteful, simple green-dominant cover-art is nicely reproduced too; the perfect artwork for the music.

If you have heard any of Yes' music - particularly from the band's very productive first 10 years - and never heard CTTE, then give it a listen. With `Dark Side of the Moon' it's probably the finest example of the best of the `prog' genre and like the best of Pink Floyd, it hasn't aged a day in 40 years.
続きを読む
17人のお客様がこれが役に立ったと考えています
違反を報告
レビュー を日本語に翻訳する

Michael Macintosh
5つ星のうち5.0 Perfect remaster (Blu-Ray)
2013年12月27日に英国でレビュー済み
Amazonで購入
This was always a wonderful album whatever it's previous guise - Vinyl, CD, or CD (Rhino remaster), but with this latest effort from Steve Wilson, it's even better and the 5.1 mix is awesome.

Many reviewers will articulate the merits of both the album and re-mix far better than I. For me I just wanted to say that this is not just for completists, but is a must buy for any fan of the album - this is without doubt (surely) the definitive version.

The re-mix is sympathetic and improves the original rather than detracting from it and I'm already looking forward to the next of Yes' back catalogue given the treatment by the 5.1 remix guru.