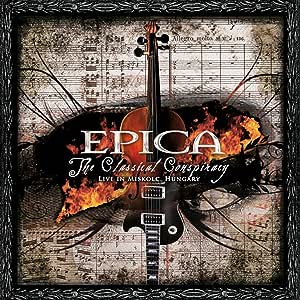 2009 two CD live album from the Dutch Symphonic Metal band. The recorded live show took part in Miskolc, Hungary on June 14, 2008 in the framework of the Miskolc Opera Festival. Epica performed on stage with a 40-piece orchestra and a 30-piece choir, entirely composed of Hungarian musicians conducted by Zsolt Regos.

The arrangements of famous classical tunes are wonderfully eclectic, with everything from Handel and Vivaldi to film scores like Spider-Man and Pirates of the Caribbean.

It’s interesting to hear classics like In the Hall of the Mountain King being given the heavy metal treatment, with drums and electric guitar supplementing the full symphonic orchestra. And it works, too!

The rest of this double album showcases a great selection of Epica songs. The band is at its bombastic best, and Simone Simons’ voice is in typically impressive shape.

The Classical Conspiracy is a fantastic celebration of the excessive joys of symphonic metal. The orchestra gives the music a whole new depth and dimension, and the sound quality is excellent throughout; the energy of the band really shines through.

Windows of delicate beauty punctuate the full-on fortissimo operatics. Those drawn to Epica’s subtle side should check out the acoustic recording that accompanies the deluxe reissue of Design Your Universe.
続きを読む
違反を報告
レビュー を日本語に翻訳する

JoViGo
5つ星のうち5.0 Classical & Contempory performed Oustandingly
2009年6月26日に英国でレビュー済み
Amazonで購入
Epica have so far produced three superb CD's & here with their fourth live outing they have succeeded once again to produce an awesome piece work. The musical artistry, the vision, the passion presented here is something to be relished again & again.

Epica on their own are a powerful metal band with some great musical talent at work in the composition & performance of all their music.

There style is fast driving,thoughtful,provoking,powerful,symphonic,operatic,spirited & hauntingly beautiful. They encapsulate a variety musical motives all of which will make you either want to rock out or sit back & enjoy the simplicity & beauty of a band at the top of their game.

The CD comes in two parts one an inspired fusion of rock & classical pieces which make the most of the bands great talents, Simone's beautiful graceful voice & the majesty & power of a full classical orchestra & choir.

The 3rd & 9th track on the classical set show off Simone's mezzo soprano voice to the full, this girl can go head to head with some of the best classical singers around, she is that good.

The film soundtracks of The Imperial March, Pirates of the carribean & Spiderman Medley are done with such power & enthusiam & grace that they alone will have you gasping for more.

Then we come to Epica's own body of work which on it's own stands out, but with the full orchestra & choir just raises the bar even higher. This is a live set & I will say that on this occassion the production is superb, in fact its so good that I'd say epica sound better live, especially in this context with full orchestra.

My only wish would be to have had Solitary ground from their 2nd Cd Consign to Oblivion played in the epica set this would have really been the most beatiful piece imaginable.

This CD is a brilliant peice of musical Art, it is in my humble opinion worth adding to your music collection
続きを読む
11人のお客様がこれが役に立ったと考えています
違反を報告
レビュー を日本語に翻訳する

Matthew
5つ星のうち5.0 Sheer epic brilliance - just get it
2011年8月5日に英国でレビュー済み
Amazonで購入
This is one staggering live album. Two sets - the first 'Classical', the second 'Epica'. The first set starts off with some well known pieces by Verdi, Handel, Dvorak, Vivaldi etc but with an increasingly metal influence as the set progresses. The second set second launches into sheer Epica. Full pace, soaring vocals and grunts. The question is how on earth does this work? What kind of lunacy was it to try and combine a full orchestra, classical operatic performance and metal. It's simply insane. I don't normally listen to classical music and I certainly don't listen to opera. But this is simply one spell-binding live performance that I cannot resist. Whoever was lucky enough to have been in Miskolc on the night surely witnessed one of the most astonishing metal events ever.
続きを読む
1人のお客様がこれが役に立ったと考えています
違反を報告
レビュー を日本語に翻訳する

Amazon Customer
5つ星のうち5.0 The Classical Conspiracy.
2015年1月1日に英国でレビュー済み
Amazonで購入
This live version album is an absolute delight to listen to. Whoever sorted out the sound quality did a superb job. The first disc has mainly classical music but also some vocals about 2/3 of the way through. The second disc is all vocals and to the same high standard as the first disc. I think this has now become my favourite album from Epica. Superb.
続きを読む
違反を報告
レビュー を日本語に翻訳する
すべてのレビューを参照します
Amazonプライム会員ならお急ぎ便、日時指定便が使い放題
さらに、映画もTV番組も見放題。200万曲が聴き放題 。クラウドに好きなだけ写真も保存可能。
> プライムを無料で試す