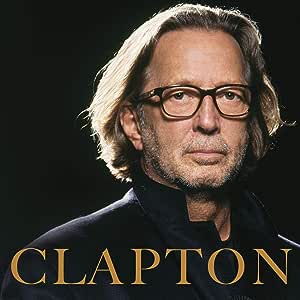 2010 album from the guitar Icon. Co-produced by long-time collaborator Doyle Bramhall II, Clapton features an all star cast of musical collaborations started with the legendary JJ Cale, drummer Jim Keltner, bassist Willie Weeks, and keyboardist Walt Richmond-and the sessions later added guests including Steve Winwood, Wynton Marsalis, Sheryl Crow, Allen Toussaint, and Derek Trucks. Clapton created a collection that touches on everything from century-old traditional brass bands to little-known Country Blues to brand-new originals. The result is both relaxed and revelatory, and unlike anything the guitarist has done in his legendary career.

Lochman
5つ星のうち3.0 Another Era
2010年11月19日に英国でレビュー済み
Amazonで購入
I'm someone who subscribes to the theory that there is no such thing as bad pizza: even when it's bad, it's still good! For me, the same is true of Eric Clapton. His extensive output covers quite a range of musical genres but always with his distinctive style of playing. Without a doubt, his best albums are always those recorded at live gigs where the presence of an audience seems to help him move up a gear in terms of the skill and intensity with which he plays.

Unfortunately, this album comes from a studio and, musically, from another era altogether. It's good to see musicians experimenting with styles of music outside of their normal boundaries but it can be a risky business. I suppose this album may grow on me if I keep listening to it but I cannot escape the conclusion that it's not a patch on his recent "Sessions For Robert J" which is one of the best that I think he's ever produced.

I could never bring myself to say that a Clapton album was "bad" but I don't think that this is going to become one of my favourites.

Ivon of Windermere
5つ星のうち4.0 Retrospective
2012年10月22日に英国でレビュー済み
Amazonで購入
Some blues guitarists seem to have reached their zenith as they get older delivering performances that have an edge. I would not describe this album in that way. Clapton seems confident, competent and comfortable on these tracks - which are somewhat retrospective - and maybe this is how he was at the time of recording.

After reading other reviews I was a bit reticent about making this purchase. I don't regret it because it is enjoyable listening, but it is a bit 'easy listening' so there are other Clapton albums I would recommend first, such as Slowhand, Unplugged and Reptile.

Mr. S. Palmer
5つ星のうち5.0 Great Music from A Master
2013年4月25日に英国でレビュー済み
Amazonで購入
I am a life long fan of EC and have many of his CD's but not to the point where I go and buy every CD he has produced and over the last few years found him settling musically into the same pattern, but I saw this CD Clapton and thought why not give it a play not knowing what to expect.
The CD tracks have all been listed and reviewed on here many times but there really is a good blend mixture of blues/rock and unusal tracks non more so than the unexpected 'My Very Good Friend The Milkman which I at first thought would be woeful but it is really sung and played very well, this is a very good CD which grows on me the more I play it.

Doublecross
5つ星のうち3.0 Clapton makes decent album shock
2011年8月4日に英国でレビュー済み
Amazonで購入
Clapton's best album since 'Backless', mainly because he sounds as if he likes and is interested in the songs he's singing. It does make a change. 'Autumn Leaves' and 'Rockin' Chair' are the highlights. These are great songs and should be hard to foul up but there is genuine affection in the performances. Clapton can still play the guitar, as he showed at times during the recent gigs with Winwood. But we learn not to expect to hear it on his studio product and at least the warmth of this offering lifts it above most of what's gone before since the mid 70's.
続きを読む
3人のお客様がこれが役に立ったと考えています
役に立った
フィードバックを送信中...
フィードバックをお寄せいただきありがとうございます。
申し訳ありませんが、お客様の投票の記録に失敗しました。もう一度試してください。
違反を報告
レビュー を日本語に翻訳する

Squyre
5つ星のうち5.0 Something old, something new, Clapton's take on years of blues
2010年10月17日に英国でレビュー済み
Amazonで購入
Where I was expecting more of Clapton's covers of 'classic' blues songs plus some new songs from Clapton, I was pleasantly surprised and impressed by the new 'CLAPTON' album. EC's covers of a varied range of old songs (Irving Berlin, Hoagy Carmichael being two of the composers) plus a new Clapton/ Doyle Bramhall II collaboration, brought a new and enjoyable take on these noted songwriters. Together with contributions from J.J. Cale, Doyle Bramhall II and a host of noted and talented musos this album makes for excellent listening.
続きを読む
3人のお客様がこれが役に立ったと考えています
役に立った
フィードバックを送信中...
フィードバックをお寄せいただきありがとうございます。
申し訳ありませんが、お客様の投票の記録に失敗しました。もう一度試してください。
違反を報告
レビュー を日本語に翻訳する

George G. Olson
5つ星のうち5.0 Not classic Clapton, but great stuff from a gold standard musician.
2019年3月12日に英国でレビュー済み
Amazonで購入
I am a long time Clapton fan and for me, watching the evolution of his music is a pleasure. Those looking for rock classic from Clapton will be disappointed in this Cd. However, those who know about rocks origins in the blues, will love Clapton’s take on these blues standards. The new variation on “Layla” is worth a listen.
続きを読む
役に立った
フィードバックを送信中...
フィードバックをお寄せいただきありがとうございます。
申し訳ありませんが、お客様の投票の記録に失敗しました。もう一度試してください。
違反を報告
レビュー を日本語に翻訳する

Amazon Customer
5つ星のうち4.0 Disapointing
2018年11月30日に英国でレビュー済み
Amazonで購入
The early tracks on this CD were in my view completely out of place with the later "standard" tracks which were far more enjoyable. All tracks not compatible. Very good musically
続きを読む
役に立った
フィードバックを送信中...
フィードバックをお寄せいただきありがとうございます。
申し訳ありませんが、お客様の投票の記録に失敗しました。もう一度試してください。
違反を報告
レビュー を日本語に翻訳する