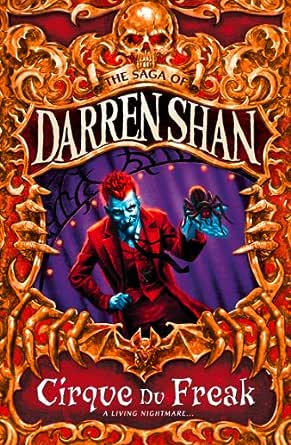 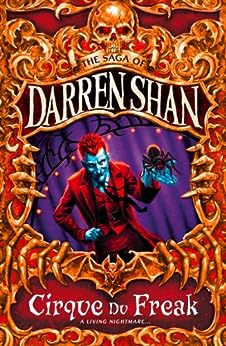 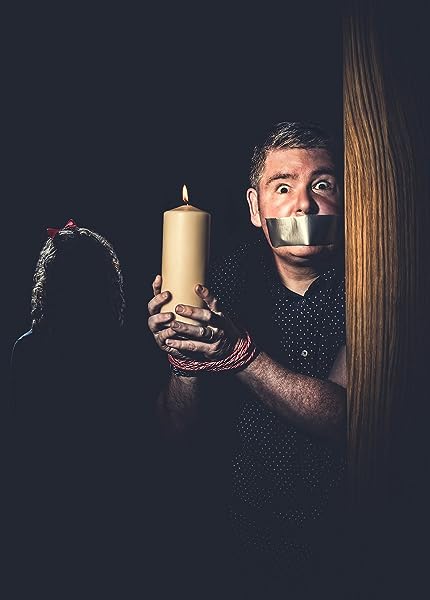 VAMP IT UP IN THE NEW MILLENNIUM!!
We're at the start of something big ... something dangerous ... something deadly. The Saga Of Darren Shan is going to take us places we've never been before, places of darkness and terror and doom. It's going to introduce us to many strange and fascinating characters, some of whom are true and helpful, some of whom are deceitful and murderous. The difficulty will be telling them apart, because in the darkness it's hard to spot the difference between good and evil. The world of Darren Shan is a harsh world, a testing world, a cruel world. It's a place of poisonous spiders, savage wolf-men, insane killers; a domain of magical, powerful beings, of freak shows, of underworld tunnels and organisations. It's a world where death stalks silently by the sides of every character - reaching out to snatch them whenever it chooses, in the blink of an eye, the beat of a heart, the baring of a set of teeth. CIRQUE DU FREAK is the start of the adventure. In it, an ordinary boy called Darren Shan steps through a doorway into a world of nightmares. I hope you step through with him - he's going to need the support of loyal and honest friends in the lonely years ahead. We're at the start of something big ... the path in front of us is long and bloody ... I don't know if we're ever going to make it back ... --このテキストは、kindle_edition版に関連付けられています。

DARREN SHAN is the author of the internationally bestselling series Cirque du Freak (known as The Saga of Darren Shan in the UK), as well as the series The Demonata and The Saga of Larten Crepsley. His adventures have sold more than twenty-five million copies around the world and have been translated into over thirty languages. He lives in Ireland.

Cirque Du Freak "...fast-paced and compelling book which engages the reader's attention early and keeps it up to the very end. Full of satisfyingly macabre touches, it explores the powerful fascination of the dangerous and unnatural and, also, movingly the obligations of friendship. The narrator struggles with his conscience and with the unforseen consequences of his actions, both foolish and noble, which make for a plot full of twists - while the climax is fittingly unexpected and leaves the reader hungry for more." JK Rowling `Brilliant, macabre tale.' Guardian "I read Cirque Du Freak last week. I loved it. I love the way you manage to juggle the funny with the unpleasant, the affection with the hurt. It's great story-telling." Roddy Doyle The Vampire's Assistant "The Vampire's Assistant blazes a thrilling, gruesome trail through a fascinating plot." The Good Book Guide Vampire Mountain "Get your teeth into it!" Funday Times --このテキストは、kindle_edition版に関連付けられています。

Darren Shan is just an ordinary schoolboy who enjoys hanging out with his three best friends. Then one day they stumble across as invitation to visit the Cirque du Freak, a mysterious freak show. Only two tickets are available, so they draw straws to see who will go. As if by destiny, Darren wins one, and what follows is his horrifying descent into the dark and bloody world of vampires. This is Darren's story.
--このテキストは、kindle_edition版に関連付けられています。

A boy sneaks out to an illicit freak show, and his life becomes entangled with a vampire spider-wrangler. "The author mines the exploitative history of early 20th-century sideshows to create an artfully macabre 'Cirque du Freak,' " wrote PW. Ages 10-up.
Copyright 2002 Reed Business Information, Inc. --このテキストは、kindle_edition版に関連付けられています。

Anyone who loves the humorous but hair-raising horror in R.L. Stine's Goosebumps series will devour British author Darren Shan's first novel with equal zeal. Some books are born with a surrounding buzz; this one even has Harry Potter creator J.K. Rowling's stamp of approval: "Fast-paced and compelling, full of satisfying macabre touches," she writes. Warner Brothers will be making it into a movie, and the rest of the series is already in the works. Given all that, you'd expect a tour de force! Really, though, Cirque Du Freak is a thrill ride that will keep even the most reluctant readers turning pages, but will never take its place in the literary canon.

Darren Shan, author and narrator, sets the book up as a true story, warning readers: "Real life's nasty. It's cruel.... Evil often wins." Indeed, evil begins to win when Darren and his buddies find a flier for "Cirque Du Freak," a traveling freak show promising performances by the snake-boy, the wolf-man, and Larten Crepsley and his giant spider, Madame Octa. Darren and his friend Steve wouldn't miss it for the world.

So, Saturday night they sneak out to the old theater, tall and dark, with broken windows. "Every act you see tonight is real," croaks Mr. Tall. "Each performer is unique. And none are harmless." That's for sure. (A werewolf bites off the hand of someone in the audience, for instance.) Things grow very serious for the two boys when Steve not only recognizes Mr. Crepsley as a famous vampire, but professes his true desire to join him! To make matters worse, the spider-obsessed Darren goes back to the old theater to steal Madame Octa so he can teach her tricks in his room. (He does, with mixed results.) The plot further coagulates as Darren is faced with some terrible decisions about what to do to save his bloodthirsty friend Steve.

Readers may be too enthralled to notice some clumsy editing (the aforementioned bitten-off hand is later referred to as an arm, Darren stops dead in his tracks when he's already stopped, etc.). They may also not notice that the boys constantly use adult-sounding expressions like "his breath stank to the high heavens," though the book is clearly set in the 21st century. If this book gets under your kids' skin (and it probably will), they're in luck--we haven't heard the last of the Saga of Darren Shan. (Ages 10 and older, not for the faint of heart) --Karin Snelson
--このテキストは、kindle_edition版に関連付けられています。

Sarah
5つ星のうち3.0 Saw the movie, wanted to read the book to see the comparison.
2019年8月31日に英国でレビュー済み
Amazonで購入
It wasn’t the worst in the fact that the story is a great idea but it definitely doesn’t have a good enough grasp on its audience. It was pretty violent yet written for a child. It was also written pretty badly. There was so many unnecessary explanations and descriptions. I take that down to the fact he was trying to make the reader believe that this was written by a child in a diary and that the whole story is real. It really annoys me that I still want to read the next one just to know what happens though.. how does that work?
続きを読む
1人のお客様がこれが役に立ったと考えています
違反を報告
レビュー を日本語に翻訳する

NordicSecret
5つ星のうち5.0 One of my favourites
2017年6月2日に英国でレビュー済み
Amazonで購入
Let's ignore for a moment the film they made out of this book. Just...pretend it doesn't exist.

This series of books were a classic favourite when I first found them in a library a long time ago, and binge read the entire series in about 5 days. The saga picks up momentum faster than a train pulling away from a stop - and honestly if you love yourself a good modern twist without glitter, you can't go wrong with this series. Some of the best story telling I've seen, and recommended to anyone thinking of giving them ago. You won't be dissapointed.
続きを読む
5人のお客様がこれが役に立ったと考えています
違反を報告
レビュー を日本語に翻訳する

Hailey Adams
5つ星のうち5.0 Great read and listen
2020年11月12日に英国でレビュー済み
Amazonで購入
I've loved listening to this book and reading it. Do give it a try of you like vampires. Darren is a young boy and at first I thought it was going to be too much of a story for children (not me who's 24😂) but I have to say this story is really good. I love listening before bed and have been captivated into knowing what's going to happen next in his adventures.
続きを読む
違反を報告
レビュー を日本語に翻訳する

MJA
5つ星のうち4.0 Step back to childhood
2016年11月15日に英国でレビュー済み
Amazonで購入
Read this book when I was a kid at school. I have gone back and re-read some of the better young adult based series of books, harry potter, chronicles of Narnia, hunger games, on the kindle so I have them collected. Just for the keep sake really, the story did grip me years ago but is a bit flimsy reading as an adult to say the least and is a bit far fetched but hey ho, it's an easy read and I'll get the whole series. Was sure there was only seven books when a kid in the series but are twelve now so more to read. A step back into my youth lol. Enjoy!
続きを読む
1人のお客様がこれが役に立ったと考えています
違反を報告
レビュー を日本語に翻訳する

Trackerlou
5つ星のうち5.0 Finally, something my son will read!
2011年1月27日に英国でレビュー済み
Amazonで購入
I bought this book for my son who, like a lot of boys, would much rather be playing on his xbox than reading. He'd never managed to finish an entire book before so, given the low price, I thought I'd give this a try. He loved it! Cirque du Freak is the only book my son has ever voluntarily read from start to finish and he loved it so much, he asked for the 2nd book straight afterwards, The Vampires Assistant. After just finishing that one, we are awaiting delivery of the third book in the series, Tunnels of Blood.

These books are excellently written with interesting plots and characters. They can be a little gory so not for the sensitive types but for older kids and young teens, they're brilliant. Highly recommended!
続きを読む
違反を報告
レビュー を日本語に翻訳する
すべてのレビューを参照します
トップへ戻る
Amazonについて
Amazonでビジネス
Amazonでのお支払い
ヘルプ＆ガイド
日本語ショッピングのための言語を選択します。 日本ショッピングのための国/地域を選択します。
© 1996-2020, Amazon.com, Inc. or its affiliates