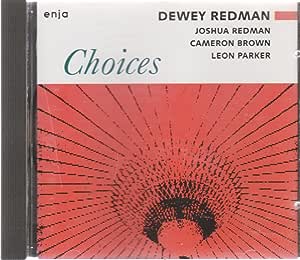 Mark Zika
5つ星のうち5.0 _the real thing... .. .
2013年4月26日 - (Amazon.com)
the creativity starts immediately and i mean immediately. tenor saxophone played in the alto range as well as tenor... absolute ornette coleman feeling and style and there is nothing wrong with that... in the right hands, and who better a spokesperson; ornette's friend and former associate the great dewey redman. this first cut is driving... flawless intricate driving... the rhythm builds and builds with dense fills, splashing cymbals and intricate rhythmic bass lines. this first cut tells us right away... we are among pros... in this listening experience.
song two: beautiful tone, dewey redman starts with a long opening ballad style phrasing before he breaks out into exploratory improvised tenor with support from graceful light cymbal and refined bass.
song three: splendid and intricate performance on wind instrument the mussette, performed by dewey redman; which he played so wonderfully on the ecm and black saint releases of the 1980s' with 'old and new dreams'. there are voice and rhythm layerings, for lack of a better word, which make for a quite exotic, clearly african influenced listen; the percussion ever changing creates a strong memorable journey.
song four: ballad on tenor by joshua redman. he explores the lower range as well as middle, splendidly.
song five: out there ornette style piece; father and son on tenor and alto... respectively: everyone stretches out and magnificently they do on this flawlessly executed improvisational piece. it's hardcore... the real thing.
dewey redman: tenor saxophone, musette. joshua redman: tenor and alto saxophone. cameron brown: bass. leon parker: drums. 1992 release. blacksaint.
-five songs at 55 min:29 sec length.

Lance B Seidman
5つ星のうち5.0 Relax, and get smooth.
2003年4月23日 - (Amazon.com)
I heard the track 'Imagination' on Radio@Netscape, and listend to the whole song, very relaxing and pleasent to listen to and fell in love with this artist as well with the song. Hope to see a larger album next time.
続きを読む
3人のお客様がこれが役に立ったと考えています
レビュー を日本語に翻訳する