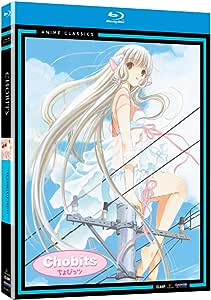 From the celebrated manga group, CLAMP (X, Cardcaptor Sakura), comes a stimulating exploration of the connection between a bumbling young man and his extraordinary android.Tokyo is abuzz with persocoms - humanoid computers that are virtually perfect. The socially and technologically inept Hideki is dying to get his hands on one. When he finds Chi abandoned in the trash, she's cuter than any current model he's ever seen before. But when he gets her home and turns her on, she has no data and only a single learning program installed. While Hideki puts his whole heart into teaching Chi the ins and outs of humanity, a mystery unfolds as a dark secret within her awakens.

Amazon カスタマー
5つ星のうち5.0 Anime that anticipate the great era
2016年10月2日に日本でレビュー済み
Amazonで購入
To the person who wants to enjoy the world of pure chobitsu it is recommended.

J. Teitor
5つ星のうち5.0 A true classic !
2018年4月30日に英国でレビュー済み
Amazonで購入
This was one of the first anime series I purchaced from amazon, way back in 2011. Somehow I never got around to writing a review. The story starts with Hideki, a young man living and working on his families farm in Hokkaido (The northern island of Japan.) He has failed to pass the entrance exam to college, but then gets the chance to enroll in a cram school in Tokyo, to get his grades up to scratch. He arrives in the big city, and is amazed by the technology, particularly the incredible "persocoms" (living computers in human form.) As much as he wishes he too could own one of these amazing machines, they are very expensive and way beyond the means of a simple country boy. Imagine then his surprise when on his way back to his apartment one night, left discarded in rubbish he finds a beautiful persocom apparently unwanted. All he needs to do is find a way to switch it on. The story of how he does, and what follows, will amuse, entertain and delight you. With a host of other interesting characters, and some thought provoking insights into our relationship with the machines that serve us, and how they affect our interaction with others. This is an anime which will live in your heart long after you have watched it. It also has arguably the sweetest opening song ever written. If you can still get a copy, do it . You won't regret it.
続きを読む
1人のお客様がこれが役に立ったと考えています
違反を報告
レビュー を日本語に翻訳する

bozeman1941
5つ星のうち5.0 Brilliant - a must-see!
2012年4月17日に英国でレビュー済み
Amazonで購入
I just finished watching this series, and I totally loved it! It is poignant, innocent, funny at times (in an awkward sort of way!), has a lot of depth to the characters, a few sad moments, and is really lovable.

The story is based on male lead Hideki Motosuwa, an 18-year-old student who has been sent to Tokyo by his parents to study at a 'cram' school (he lives on a farm with his family normally). Shortly after arriving, he finds a 'persocom' (a humanoid-form computer/android) in the trash, and takes her home and tries to restart her. After eventually managing to, he finds she has no data installed, and is only able to say one word, 'Chi', so he names her Chi. She turns out subsequently to be a 'Chobit' series persocom (hence the title) which are much more sophisticated than the run-of-the-mill persocoms, and rumoured to be sentient (i.e. self-aware). His next-door neighbour, fellow-student Hiromu Shinbo and his persocom (a cute, doll-sized, mobile model called Sumomo) help him to get Chi going again. Other characters are Chitose Hibiya, the manager/landlady of the apartment block where Hideki and Shinbo live, who is kind, gentle and helpful, even letting Hideki pay his rent late when he loses his wallet one time. She teaches Chi to make curry and rice for Hideki's evening meal. Then there is Minoru Kokubunji, a 12-year-old genius, expert on persocoms and son of a rich family; he owns a number of persocoms, all of whom are dressed in skimpy, maid-type outfits complete with stockings and suspenders! He also has one special, custom-built persocom called Yuzuki, who looks and sounds like his late sister, whom he misses very much; she is wiser and kinder than most of the 'standard' persocoms, and seems to really care about Minoru, who she addresses as 'Lord Minoru'. Attractive Miss Takako Shimizu is Hideki and Shinbo's teacher, and often catches Hideki daydreaming in class. When Hideki is forced to take a part-time job at a pub/restaurant called 'My Pleasure', in order to make ends meet, he meets bosses daughter Yumi Omura, a cute 17-year-old who is petite and pretty, and has ample bosoms ('I'm a D cup, if you're wondering', she tells Hideki one time, when he absent-mindedly stares at her chest)! Hiroyasu Ueda is a kind, gentle guy, manager of a cake shop, where Chi gets a part-time job. He is impressed with Chi's ability to learn on the job, and to work hard, and becomes friends with both Chi and Hideki - he even teaches Chi to make cakes herself. He has a sad secret in his past. Yoshiyuki Kojima, aka 'Dragonfly', is a somewhat obsessive, slightly creepy, custom persocom builder who becomes obsessed with Chi, and even kidnaps her at one point. He has a cute mobile persocom called Kotoko, who is kind and wise, and programmed to always tell the truth, which lands her master in trouble at times! She and Sumomo are often seen together towards the end of the series, although Kotoko finds Sumomo to be loud, unsubtle and a bit hard to take, often sighing in exasperation at her crazy antics! Lastly there are Zima and Dita, two security persocoms, who have been tasked with keeping tabs on Chi, in case she runs her 'final program', with unknown disastrous consequences.

There is little in the way of fanservice (apart from one episode where Hideki has to get underwear for Chi!), and Kokobunji's 'maid' persocoms. Oh, and one time teacher Miss Shimizu gets drunk, crashes at Hideki's flat, and strips off down to her bra and panties (it is a hot summer's night!), and gives Hideki a nosebleed! Definitely one to watch, I found the whole story to be riveting, entertaining, funny, heartwarming and great fun. I do hope there will be more animes in the same series.
続きを読む
違反を報告
レビュー を日本語に翻訳する

T. Alexander
5つ星のうち4.0 Boy meets Persocom
2011年8月25日に英国でレビュー済み
Amazonで購入
Hideki Motosuwa is a country boy who comes to Tokyo to attend cram school so that he can get into university. While living in Tokyo he notices that everyone has a personal robot known as a Persocom but they are too expensive for him buy so when he finds an abandoned Persocom in a pile of rubbish he is ecstatic. When he gets home with the Persocom and starts her up only to find that her memory has been erased and all she can say is Chi.

The original `Chobits' manga is one of the best manga series that I have read and while this anime adaptation isn't quite as good as the original it is still very entertaining to watch. There are a few changes from the original manga with some additional episodes added here and there (such as the beach episode), some changes to chronology (in the manga Hideki had been living in Tokyo for a while) and the ending is changed quite a bit. These changes seem to make the series slightly more comedic than the manga but it still remains a very enjoyable series that is both sweet and entertaining. The animation for the series is good and the English dub is reasonably good. The characters and the setting in general are nicely developed and the plot is also interesting.

`Chobits' is a very entertaining series and while it isn't as good as the original manga it still deserves a high four star mark.
続きを読む
2人のお客様がこれが役に立ったと考えています
違反を報告
レビュー を日本語に翻訳する

J. L. A. Huguenin
5つ星のうち5.0 A wonderful story
2007年4月15日に英国でレビュー済み
Amazonで購入
This fabulous story of countryboy Hideki Motosuwa and the persocom Chii which he found at a dumpster is really captivating. The storyline progresses throughout the series with such charisma that you want to watch it without interruption. Chii is innocent and naive like a small child, which makes her immensely cute and combined with Hideki's clumsiness and hysteria there are a lot of very funny moments.

The relationship between Hideki and Chii is somewhat like a father with his little daughter when he is teaching Chii several new things and tries to keep her from harm that is lurking in the big city. It is obvious that he cares for Chii, which only grows as the story continues and eventually reaches a climax.

It is the combination of humour, love and suspense that makes Chobits one of my favourite anime series ever!
続きを読む
10人のお客様がこれが役に立ったと考えています
違反を報告
レビュー を日本語に翻訳する

Dave Lawrence
5つ星のうち5.0 Classic
2013年10月21日に英国でレビュー済み
Amazonで購入
This is a classic anime. Captivating series with lots of humour. Some may find the male lead a little annoying in his manner but this is just part of the humour and seems to be an almost normal way for main male leads to act in similar anime series. I really enjoyed it. Unfortunately we are used to more up to date graphics but in this case the style adds to the series 'quaintness.'
続きを読む
違反を報告
レビュー を日本語に翻訳する
すべてのレビューを参照します
Amazonプライム会員ならお急ぎ便、日時指定便が使い放題
さらに、映画もTV番組も見放題。200万曲が聴き放題 。クラウドに好きなだけ写真も保存可能。
> プライムを無料で試す