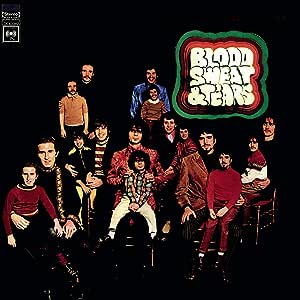 Child Is Father to the Man

Drawing classical, jazz and R&B into the mix, Blood, Sweat & Tears expanded the boundaries of pop with their 1968 debut. That groundbreaking album-including I Can't Quit Her; Morning Glory; Without Her; My Days Are Numbered , and more-is reissued here with three bonus tracks including two demos!

Mark Barry
5つ星のうち5.0 "...You Can Say I Told You So..." - Child Is Father To The Man by BLOOD, SWEAT & TEARS (2000 CD - Vic Anesini Remaster)
2014年9月11日に英国でレビュー済み
Amazonで購入
Arising out of the ashes of The Blues Project - both AL KOOPER (Guitars, Organ and Lead Vocals) and STEVE KATZ (Guitars, Lute and Lead Vocals) joined forces with Bassist JIM FIELDER and Saxophonist FRED LIPSIUS and formed Mark 1 of BLOOD, SWEAT & TEARS. And although Kooper lasted only one album - what a debut album "Child Is The Father To The Man" is.

BONUS TRACKS:
12. Refugee From Yuhupitz
13. I Love You More Than You’ll Ever Know
14. The Modern Adventures Of Plato, Diogenes And Freud

I’m thrilled to say that their debut masterpiece has been given a stunning VIC ANESINI remaster – gorgeous sound quality that hammers you – track after superb track. You can hear RANDY BRECKER’s Trumpet, ALAN SCHULMAN’s Cello and the sweetness of Jim Fielder’s Bass –a top job done.

Once you get past the superfluous "Overture" with it's manic giggling - you're hit immediately with Bluesy Rock genius - "I Love You More Than You'll Ever Know" (lyrics above). It's the kind of great drama love song that lends itself to cover versions. Tina Britt did her take on the 1968 Minit Records LP "Blue All The Way" while one of my fave versions is Donny Hathaway's Soulful variant on his stunning 1973 Atlantic album "Extension Of A Man". Even legendary guitarist Les Paul revisited it in 2005 on his "& Friends" CD project with Mick Hucknell on Vocals and Joe Perry of Aerosmith on Guitar.

You're then hit with a brass/keyboard cover of Tim Buckley's "Morning Glory" sung sweetly by Steve Katz. "My Days Are Numbered" is another superb Kooper original - this time in a funky vein. Things go almost Lounge Lizard with their cover of Nilsson's "Without Her" - another album highlight (Producer John Simon plays Piano on “Without Her” and Organ on “Just One Smile”). The tempo's changed again to something more solemn - Randy Newman's "Just One Smile" which leads it into another gem "I Can't Quit Her". After all that brass and rock - the beautiful acoustic opening of "Meagan's Gypsy Eyes" comes as a welcome surprise (a Steve Katz original) - the remaster really shining here. There are Jazz Rock and Prog elements thrown in there too that add to the whole overall stew of sound. And on it goes to the cover of Goffin/King's "So Much Love". The three bonuses are interesting - especially the simple piano basis to "The Modern Adventures..." - it gives you an idea of how advanced the arrangements on the finished track are.

Kooper left almost immediately after the LP was released - replaced with the superb vocalist DAVID CLAYTON-THOMAS who brought the band proper chart success with their self-titled 2nd album in 1969 - spawning hits like "You've Made Me So Very Happy" and "Spinning Wheel". I'd argue in fact that “Blood, Sweat & Tears” is just as good as the debut – albeit in a slightly different musical way.

But that starter album - “Child Is Father To The Man” - just had something special about it – cool, funky and wonderfully new - and this dinky CD remaster of it recaptures that vibe in spades...
続きを読む
11人のお客様がこれが役に立ったと考えています
役に立った
フィードバックを送信中...
フィードバックをお寄せいただきありがとうございます。
申し訳ありませんが、お客様の投票の記録に失敗しました。もう一度試してください。
違反を報告
レビュー を日本語に翻訳する

Mike the Fish
5つ星のうち5.0 Great 5.1 mix rescued from the shelves!
2015年1月2日に英国でレビュー済み
Amazonで購入
So ten years after Al Kooper mixed this album in 5.1 it gets a release. Originally released in 1968, this is an intriguing and remarkable sophisticated album. Al Kooper was part of the band lineup for this album only, and has done a great job mixing to 5.1. The album uses the rear channels extensively and it works very well with the material. Some maniacal laughter at the beginning rotates around the sound field, but not in a nauseating way. There was a patch about three quarters of the way through where the mix in the rears seems fairly dormant, but things pick up again towards the end of the album. This is a very sympathetic mix to the material, and is very open with the extensive use of the rear channels, yet it retains its vintage 60s sound and is very cohesive throughout. A couple of tracks in the surround mix now have count ins not heard on the stereo mix, and as a result are a few seconds longer than the original tracks. Several other tracks are very slightly shorter, and So Much Love/Underture is around ten seconds longer. Could this be the definitive mix? Highly recommended.

EDIT: 18/08/18. I'm no fan of the one of the people credited with mastering the stereo mix, but having compared the CD layer with an early US vinyl copy I've got to say that it sounds really good. There's better bottom and top end and a nice clarity to it. A pleasant surprise!
続きを読む
1人のお客様がこれが役に立ったと考えています
役に立った
フィードバックを送信中...
フィードバックをお寄せいただきありがとうございます。
申し訳ありませんが、お客様の投票の記録に失敗しました。もう一度試してください。
違反を報告
レビュー を日本語に翻訳する

Victor
5つ星のうち4.0 Child is father to the man: Blood Sweat and Tears - Overture to a class act.
2011年6月9日に英国でレビュー済み
Amazonで購入
Also known as `The First Album', this is the debut recording from the enduring collective known as Blood Sweat and Tears. Setting out their agenda of fusing rock with a big band jazz and classical style, the album contains a collision of musical influences that works well, largely due to the talent of the musicians.

This album has a big sound, a bombastic depth from the horn section coupled with the intimate bluesy sound of the keyboards and guitars. The band synthesise soul, jazz, rock and blues with a classical influence that gives a complex and unique sound totally their own. Al Kooper's vocals are probably the weakest aspect, not quite managing to match the power of the music. This does not detract however, and a classic album results.
続きを読む
2人のお客様がこれが役に立ったと考えています
役に立った
フィードバックを送信中...
フィードバックをお寄せいただきありがとうございます。
申し訳ありませんが、お客様の投票の記録に失敗しました。もう一度試してください。
違反を報告
レビュー を日本語に翻訳する

A.Ward
5つ星のうち5.0 Wish that all albums were this good
2011年10月18日に英国でレビュー済み
Amazonで購入
Slowly, I am reclaiming my old vinyl onto CD and I had delayed getting this album, but so glad I did. This album is so timeless.

The opening 'Overture' with it's crazy laugh brought back memories of how I enjoyed this album. Then 'I love you more than you'll ever know' and I was back then and knowing all the words! It was also a timely reminder of just how good a vocalist was Al Kooper - from memory, I recall I was tracking down any album that he had to do with!

lonniej
5つ星のうち5.0 Five stars. However, that's not an objective assessment ...
2015年5月14日に英国でレビュー済み
Amazonで購入
Five stars. However, that's not an objective assessment. I bought this album when it was first issued in the late sixties. Maybe it was the first album to use jazzmen as other than session musicians. Whether it stands the test of time as Chicago Transit Authority does is perhaps a matter for the age of the listener. But it still does it for me.
続きを読む
1人のお客様がこれが役に立ったと考えています
役に立った
フィードバックを送信中...
フィードバックをお寄せいただきありがとうございます。
申し訳ありませんが、お客様の投票の記録に失敗しました。もう一度試してください。
違反を報告
レビュー を日本語に翻訳する
その他の国際レビューを読み込む

hal_the_gal
5つ星のうち3.0 A curate's egg
2013年12月31日に英国でレビュー済み
Amazonで購入
There are some great tracks (I Can't Quit her, My Days are Numbered and I Love You More Than You'll Ever Know) but many of the others are definitely sounding a bit dated now. Still it is what it is - an album from the 60s so you can't expect more than that but it's worth buying for the good songs which are excellent. The cover is fantastic but sadly rather less impactful in CD format.
続きを読む
1人のお客様がこれが役に立ったと考えています
役に立った
フィードバックを送信中...
フィードバックをお寄せいただきありがとうございます。
申し訳ありませんが、お客様の投票の記録に失敗しました。もう一度試してください。
違反を報告
レビュー を日本語に翻訳する

Glenis D.
5つ星のうち5.0 Great sound
2019年11月27日に英国でレビュー済み
Amazonで購入
A forgotten gem. I first heard the album in the 70s and became a fan of blood sweat and tears. I bought the cd so I could play it when driving. Still a brilliant sound bringing back happy memories.
続きを読む
役に立った
フィードバックを送信中...
フィードバックをお寄せいただきありがとうございます。
申し訳ありませんが、お客様の投票の記録に失敗しました。もう一度試してください。
違反を報告
レビュー を日本語に翻訳する