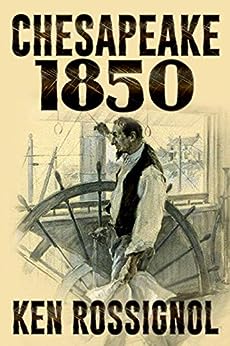 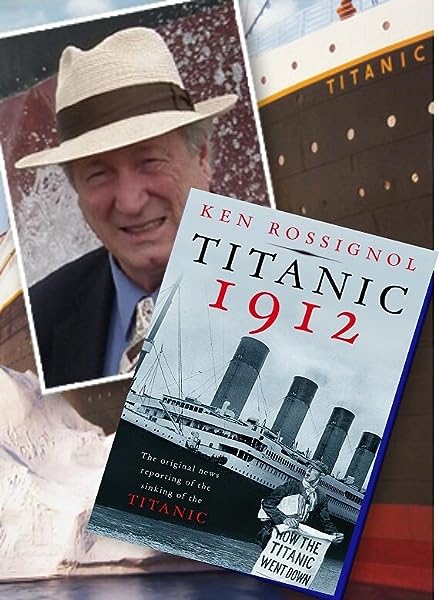 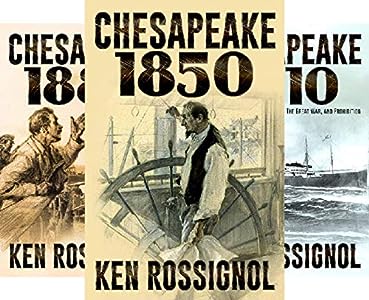 Follow the saga of the Douglas family as the ships of the Chesapeake sail through the beginning decades of the industrial revolution and the next century unfolds. As a maritime history speaker, Rossignol enjoys meeting audiences around the world and discussing the original news stories of the sinking of the RMS Titanic and other maritime history topics. In recent years Rossignol has appeared on dozens of ships in the Pacific, Panama Canal, Atlantic, Mediterranean and Caribbean discussing the stories of the heroes of the Titanic, the explorations of the new world voyagers, the Bermuda Triangle, the history of piracy and other maritime history topics. Rossignol regularly appears at the Titanic Museum Attractions in Pigeon Forge, Tennessee and Branson, Missouri for book signings and to talk with visitors about the RMS Titanic. He has appeared on Good Morning America, ABC 20/20; ABC World News Tonight and in a currently running production of Discovery Channel Investigation Motives & Murders Series, A Body in the Bay. News coverage of Rossignol's landmark civil rights case, represented by Levine Sullivan Koch & Schulz re: United States Fourth Circuit Court of Appeals Rossignol v Voorhaar, 2003, included articles in most major news outlets, as well as a column by syndicated columnists James J. Kilpatrick. A strong highway safety advocate, Rossignol also publishes the DWIHitParade.com which focuses on impaired driving and the monthly publication, The Chesapeake. News coverage of Rossignol's DWIHitParade won an Emmy in 2012 for WJLA reporter Jay Korff and coverage of the St. Mary's Today newspaper by WUSA reporter Bruce Leshan was awarded an Emmy in 2000. Information on booking Rossignol to speak about the Titanic is available at TitanicSpeakersBureau.com. --このテキストは、paperback版に関連付けられています。

David Leigh
5つ星のうち4.0 A view of the bay
2017年7月27日に英国でレビュー済み
Amazonで購入
An ok read . A simplistic style of writing almost like a diary.
Certainly not in the same league as another more well known book about Chesapeake.
I will though read the next book.
続きを読む
違反を報告
レビュー を日本語に翻訳する

Don Kidwell
5つ星のうち4.0 Fine Blend of Historical Fact and Fiction With a Pinch of Mark Twain and Steamboat Days Added in for Good Measure
2018年4月9日にアメリカ合衆国でレビュー済み
Amazonで購入
1) Why I chose this book : I like reading about this era most especially colorful travel by steamboat
2) Type of book : Fictionalized adventure tale from 1850 on thru the Civil War and ending with the sinking of the USS Crisfield in 1865
3) Formatting/Editing : Well-written (with few errors) together with authentic photos to boot
4) Best/Worst aspect of book : Characters I enjoyed getting to know, accurate descriptions and whatever you do don't stop at 'The End' as I nearly missed some original photos included following those words
5) Favorite passage : "Life on the water is always a gamble"
6) Bottom-line: Very good book and hoping this author has similar stories to relate like this one!
続きを読む
3人のお客様がこれが役に立ったと考えています
違反を報告
レビュー を日本語に翻訳する

I purchased this book on Kindle and having been somewhat familiar with the Chesapeake Bay and being a charter member of the Chesapeake Bay, Bluefish and Beverage Society, circa 1981 thru 1995, a group of supervisors from FBIHQ who would fish two or three time a year from Maryland on a Charter boat and spend the day fishing and "beering".

In any event, the title caught my attention and I thought it would be interesting to read about some of the history of the Chesapeake Bay. As I began to read the book, I was pleasantly surprised to see it dealt with issues on the Bay involving the Civil War, as this is one of my favorite parts of American History.

The story involves a young boy named Ethan Douglas who effectively grows up on a steamboat operated by his grandpa. It deals with the history and issues involving maritime commerce and passenger transportation during the time before and after the Civil War. The story revolves around the adventures of the ten year old Ethan Douglas as he grows into a very a successful seafarer on the Chesapeake. He falls in love with the daughter of President Zachery Taylor. Being unfamiliar with the life of Taylor I had to search out the daughter of Taylor and who she actually married. I could not verify this point as an historical fact but this does not affect the overall historical accuracy's of the story.

I totally loved the fact that Ethan was a newspaper reader for the passengers on board the steamboat. The times before and subsequent to the Civil War, newspaper articles are both entertaining and informative. This is an excellent book for anyone interested in these times and especially recommended for the young reader. It is a remarkable fun book to read and sets out a sort of story of growing success and successes of Ethan Douglas' siblings. I learned some things about the history of the Bay, namely the wars between Oystermen and how incredibly lawless they were.

I gave this book a rating of five stars because it is both a fast and very informative historical read and the story of successes of a family.
続きを読む
14人のお客様がこれが役に立ったと考えています
違反を報告
レビュー を日本語に翻訳する

Patsy Chastang
5つ星のうち4.0 The life of Ethan Aaron Douglas
2015年7月13日にアメリカ合衆国でレビュー済み
Amazonで購入
Based on true events, as a young boy of 10 years old went to work with his grandfather on the 'Savannah' a steamship. Ethan learned from his experiences on the steamer, he was a deck helper loading and unloading cargo which included produce, animals, passengers and anything that needed to be imported or exported in the Chesapeake Bay area. He helped in the kitchen, became a news paper reader, reading the news paper aloud to the passengers which increased his reading and learning of current events, saw President Millard Fillmore sworn into office, went through hurricanes, learned of the underground railroads and slavery and learned about the Civil War. Ethan taught his two brothers about the duties of the steamer. Ethan's grandfather taught him about saving his money in the banking business, later he started his own companies and became a very wealthy man. This is a wonderful book full of history and great adventure, well written I enjoyed it. This is a book that a young boy would enjoy and learn from also.
続きを読む
5人のお客様がこれが役に立ったと考えています
違反を報告
レビュー を日本語に翻訳する

Jerry Marquardt
5つ星のうち5.0 CHESAPEAKE 1850 is a Great Original
2019年12月16日にアメリカ合衆国でレビュー済み
Amazonで購入
Ken really did this one up good, as I recommend CHESAPEAKE 1850 to all history buffs, because my love for the style of steamboats sailing between Norfolk, Washington, D.C. and Baltimore in the 19th century is a must read. I give the full 5 stars rating based on ingenuity and layout. The book is a first of a series and this set I am absolutely proud to recommend to all my following, friends and family!
続きを読む
1人のお客様がこれが役に立ったと考えています
違反を報告
レビュー を日本語に翻訳する
すべてのレビューを参照します
トップへ戻る
Amazonについて
Amazonでビジネス
Amazonでのお支払い
ヘルプ＆ガイド
日本語ショッピングのための言語を選択します。 日本ショッピングのための国/地域を選択します。
© 1996-2020, Amazon.com, Inc. or its affiliates