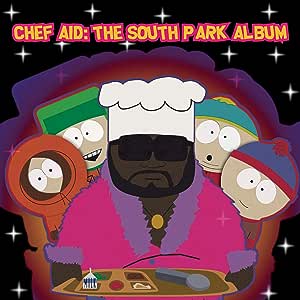 18. Tonight Is Right For Love (With Meredith Baxter-Birney)

"Ooh, suck on my chocolate salty balls / Stick 'em in your mouth and suck 'em." If that line offends you, not only should you stop from reading any further, you should definitely avoid South Park at all costs. Rabid fans of the deliciously disgusting animated series, however, will rejoice at how perfect this disc is; rather than hand you a whack of semi-whimsical material, the South Park boys chose to give the people what they want, and what they want is plenty of songs by the cast of South Park, not just about them. So alongside SP-related performances by Master P ("Kenny's Dead," on which he raps, "My little homey Kenny died tonight"), Perry Farrell ("Hot Lava"), Elton John ("Wake Up Wendy"), and the bizarrely paired Ozzy Osbourne and Ol' Dirty Bastard ("Nowhere to Run"), you'll find the best of the best: songs sung by the original cast. Most appropriately, there is plenty of Chef (a.k.a. Isaac Hayes) action, including "Simultaneous" ("I'm talking 'bout you and me and Winona Ryder / Simultaneous"), his love song for Kathie Lee Gifford ("No Substitute"), and the aforementioned "Chocolate Salty Balls." Chef Aid's undisputed champion track, however, is the tender, passionate, and incredibly touching Styx cover, "Come Sail Away"--performed with more emotion than Neil Diamond could ever muster--by South Park's head cranky son of a crack whore, Cartman. Fans of the show will also be happy to know that this is not the sung-at-top-speed version, like in the episode, but instead a fully drawn out, tortured-artist cut. So often, the funniest ideas on TV translate to the lamest recordings alive; happily, this is not the case with this collection. --Denise Sheppard

Web Shopping Guy
5つ星のうち5.0 Isaac Hayes had one heck of a voice, and the rest of the singers are good too
2019年1月18日 - (Amazon.com)
形式: CDAmazonで購入
Some of the songs are from and/or based on the episode of South Park Chef Aid. (Season 2 Episode 14. 10/7/1998.)
It's a used edition, but the person who had this before me did a good job caring for it. It even has the original stickers on the case, one of which warns this is the extreme version. I downloaded this to my iTunes and I'm currently enjoying it.

Bing bong boy
5つ星のうち5.0 Misleading printing on CD case
2019年3月15日 - (Amazon.com)
形式: CDAmazonで購入
Came in good condition. Was originally worried because the full tracklist isn't listed on the back, but everything listed is on the album, although not all the songs are listed on the back of the CD case. If you know the album and like it it's worth getting.
続きを読む
レビュー を日本語に翻訳する

David Monroe
5つ星のうち5.0 Great music, not just because it's South Park.
2011年5月18日 - (Amazon.com)
形式: CDAmazonで購入
I'm mostly a rock and punk guy, and this music doesn't conform to that, but it's great music none the less. I liked most everything by Isaac Hays, there's lots of little tidbits on here that are decent to hear, but when you really pay attention to the lyrics become great. It was worth the dollar I paid for it and then some.
続きを読む
レビュー を日本語に翻訳する

H. Hubbart
5つ星のうち5.0 Hilarious!
2007年1月20日 - (Amazon.com)
形式: CDAmazonで購入
When I was a kid, I bought this album (the edited version) and thought it was great. Now, as an adult, (eight years later) I re-purchased it and it's funnier than ever! The songs are well written and fun, but very explicit, so not for children. I find myself wondering how on earth they got the artists to agree to do this album. A must for any South Park fan!
続きを読む
レビュー を日本語に翻訳する

Troy S.
5つ星のうち2.0 Is edited, not extreme version..
2018年11月8日 - (Amazon.com)
形式: CDAmazonで購入
The copy I received, from the seller I purchased from, is not correct version. Its the edited version. May have parental advisory sticker, but it sure isn't the unedited Extreme version.. bummer.
続きを読む
レビュー を日本語に翻訳する
Amazon.comのカスタマーレビューを見る(58) 5つ星のうち4.2
Amazonプライム会員ならお急ぎ便、日時指定便が使い放題
さらに、映画もTV番組も見放題。200万曲が聴き放題 。クラウドに好きなだけ写真も保存可能。
> プライムを無料で試す