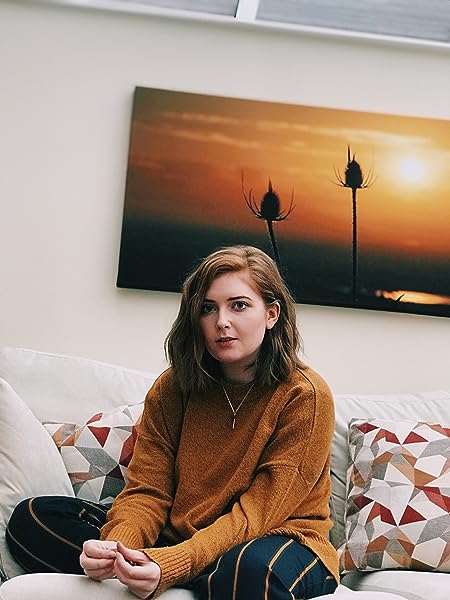 “The Catcher in the Rye for the digital age” The Times

“The most honest and authentic account of modern teenage life that you’ll read this year… outstanding contemporary fiction with appeal to fans of John Green.” The Bookseller

‘Solitaire is an extraordinary novel … [Oseman] has captured her characters’ rage, humour and insecurity with aplomb.’ The Financial Times

“Full of wit, cynicism, sarcasm and humour. This book is relatable yet original at the same time.” Goodreads review

Alice Oseman was born in 1994 in Kent, England. She completed a degree in English at Durham University in 2016 and is currently a full-time writer and illustrator. Alice can usually be found staring aimlessly at computer screens, questioning the meaninglessness of existence, or doing anything and everything to avoid getting an office job. Alice's first book, SOLITAIRE, was published when she was nineteen.

So many authors like to show only the sweetness about a couple but i love how Alice Oseman has decided to show that relationships are not all rainbows and roses, that there are arguments, insecurities and sometimes tears. And only the strongest of relationships can overcome this. Five stars, absolutely loved it.
続きを読む
2人のお客様がこれが役に立ったと考えています
違反を報告
レビュー を日本語に翻訳する

BTPBookClub
5つ星のうち4.0 brilliant short story of Charlie & Nick
2020年8月17日に英国でレビュー済み
Amazonで購入
I pre-ordered this one. If you've read and enjoyed all the Heartstopper graphic novels this one is for you. Same Characters who I love so much Nick and Charlie. This is a short story at just under 200 pages, so easy reading. The odd beautiful illustrations within too. Devoured within an hour.

A short story about Nick heading off to university and what will happen between him and Charlie. Quite a sad sorry for part of it as Charlie believes they won't be able to go long distance and starts to act out about it in the wrong way. But we know these guys right. Absolutely love them both and this short story is keeping me going till Heartstopper Vol 4 is out.

The novella follows the boys’ relationship as Nick is set to start university – which means moving away and a long-distance relationship. Charlie is happy to see Nick pursing his dreams, but is dreading the moment he’ll leave and Charlie will be left alone for the first time in two years. After spending every day together for so long, Charlie’s not sure he’ll be able to cope.

I loved this further insight into their relationship and I also liked that the story showed how one little thing, taken out of context and blown out of proportion, can so easily knock what seemed to be a rock-solid relationship off kilter. Charlie really struggles with the idea of Nick going to university and leaving him behind, he’s not sure if they’ll be able to make a long-distance work, and he begins to resent Nick.

The way that they both handled the relationship was frustrating to the reader because we know both sides and we can clearly see how much they love each other and I was really rooting for them to work it out and remain solid.

I really enjoyed watching the ups and downs of their relationship as the story progressed. Yes, it was frustrating at times, but it was also genuinely sweet and adorable.

The only downside was that I found the ending to be quite abrupt. I hadn’t expected it to end quite so suddenly and I was left a bit bewildered for a moment when I finished. Still, I highly recommend for fans of love stories and especially for people who enjoyed reading Solitaire and liked Nick and Charlie especially.
続きを読む
1人のお客様がこれが役に立ったと考えています
違反を報告
レビュー を日本語に翻訳する

Bookworm62
5つ星のうち5.0 A sweet story of love at any age
2015年7月22日に英国でレビュー済み
Amazonで購入
I was going to say that this story by talented YA writer Alice Oseman gives a great emotional insight into first love. But actually this lovely novella about two teenagers who have been together for a couple of years, but who are now facing separation as one of them heads off to Uni, shows great insight into love at any age. Speaking as someone on the wrong side of 40, what really resonated with me was Ms Oseman's insight into human emotions, the tensions present in most relationships and how damn easy it is to mess it up if you don't say what you really feel. Well done Alice Oseman. Adults could learn a lot from this book!
続きを読む
3人のお客様がこれが役に立ったと考えています
違反を報告
レビュー を日本語に翻訳する