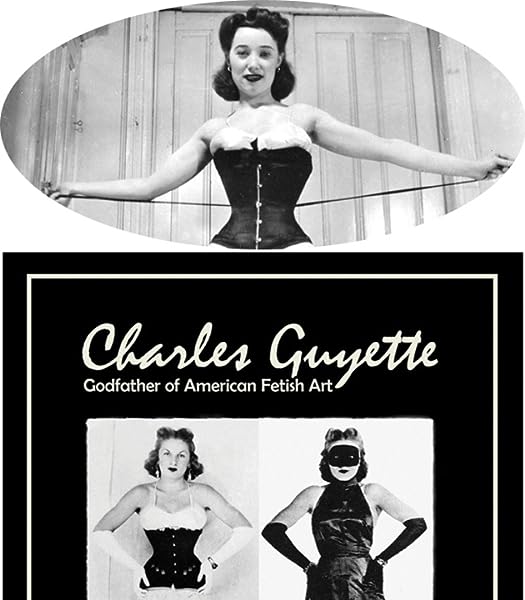 Charles Guyette, the "G-string King," referenced in the film of Wonder Woman's creator, Professor Marston and the Wonder Women, and costumer to Bettie Page, was the first person to produce and distribute fetish art in America. In 1935, he was arrested and sent to federal prison. But what should've been the end was just the beginning. Although rarely credited by name in his lifetime, he influenced everyone who would follow him, particularly the publishers Robert Harrison, John Willie, Irving Klaw, and Leonard Burtman. The aim of this book was to evoke the spirit of Guyette — to collect surviving fragments of a decimated catalog largely by referencing vintage fetish publications from the 1930s through the 1980s and reconstruct a lost history. This portfolio of images is followed by biographical information seen nowhere else, and serves as a substantial introduction to the birth of American fetish art and the cultural impact of an unrecognized pioneer.

====> Make this collection yours today!

"If New York collector, writer and fetish historian Richard Pérez Seves had not decided to assemble what he knew about Charles Guyette (along with a substantial selection of images) into this paperback, this influential forerunner of the genre's better known exponents would have continued a lot longer as the great unsung hero of American fetish art." — Tony Mitchell, thefetishistas.com

"If you're at all a fan of fetish art ... then this book will be right up your alley." — kinkweekly.com

"I've often cited John Willie's gals as my biggest fashion inspiration but I'll have to start tipping my hat to Guyette as well." — Dita Von Teese

"Fetish art (although the word "fetish" was not used in those days as that term came into fashion in a non-clinical way in the 1970s) was about testing the boundaries of freedom. Some of it had to do with unconventional sexual expression ... but more of it had to do with fashion because of how identity and gender are connected to what we wear.

Charles Guyette was a sexual fantasist, who earned his living as a costumer. He sold photos of his "costume studies" on the sly. He produced custom-made high-heel boots and shoes, sold corsets, opera gloves, and other eccentric accessories. He understood the transformative power of clothing, particularly "bizarre" and theatrical fashion. He is also referenced in the new film on Wonder Woman's creator, Professor Marston and the Wonder Women, as the costumer for Wonder Woman's real life inspiration, Olive Byrne.

He is also the author of the upcoming hardcover illustrated fetish art history and biography, Eric Stanton & the History of the Bizarre Underground.
=============== Available now on Amazon for pre-order ===============

That question is also the title of the third chapter in this volume. It starts on page 128 after 127 pages of reproduced photos and ads from the G-String King, Charles Guyette and various other fake names he utilized. Born in Somerville, MA in 1902, the Godfather of American Fetish Art died in summer of 1976. After he was sent to Federal prison for a year and one day, he adopted several aliases in order to hide his identity. That’s one of the reasons so little information about the man and his life.
For this reader/reviewer the most interesting photograph in the book is reprinted from the November 27, l943 “Collier’s Magazine.” That portrait shows Guyette making G-Strings in his shop and the background shows a selection of his designs. The second photograph of Guyette is dated Sept. 1948 and shows him with a tape measure measuring the distance from a partially clad model’s shoulder to her pasty covered nipple. Those are the only two actual photos of the man who brought fetish from Europe to the United States.

“The period of greatest notoriety for Guyette, at least as a marketer of photographs, was from 1931 to 1935. It was during this time that he openly contributed and advertised in the globally-distributed, fetish friendly magazine, ‘London Life,’ during which time his personal interest evidently expanded from circus and carnival sideshow material to European-style fetish art.” Guyette had a life-long fascination with the circus, freak shows and carnivals.

Chapter 5, was a reprint of the Jan. 19, 1944 New York Post Article by Earl Wilson called “Charley the G—String Man Explains His Business.” The article is very amusingly helped out by quotes from Guyette. “I suspect that G-String Charley is the hero of some wonderfully romantic story involving a G-string queen, and that is why he makes G-strings. When suggested this, Charley, who’s unmarried, said, ‘God forbid, that’s the last thing I want, them dames.’”

This is a well-research volume. The fact the subject had to keep a low profile to avoid going to jail again, made the researching on his life, ridiculously difficult. The author did a good job and the volume includes hundreds of photographs of Guyette’s creations and advertisements. It’s interesting to see the fetish styles over the years beginning in the 1930’s. It’s hard to understand how custom-made thigh-high leather stockings provided the sexual stimulation that they obviously did.

t
5つ星のうち5.0 Dita Von Teese recommended it
2018年1月23日 - (Amazon.com)
形式: ペーパーバックAmazonで購入
Her Highness Dita Von Teese recommended this on her Instagram. So of course I had to pick up a copy for myself. As it turns out, I bought the second edition. I found the vintage images of ladies dressed in corsets and thigh-high fetish boots to be strangely beautiful. The biographical content on Guyette at the end was especially interesting. Obviously, this effort was a labor of love, and the author's passion for vintage fetish material shines through. Quite nice. Like peeking into a secret world.
続きを読む

Tim
5つ星のうち5.0 Great value
2017年8月12日 - (Amazon.com)
Amazonで購入
A tremendous value, given the low cost, of a figure who has otherwise been lost to history. Guyette was an enterpreneur of fetish imagery, fashion and footwear who aided the careers of more notable figures like John Willie and Irving Klaw. Seves does a service to us by rescuing this man from obscurity.
The book is 7 1/2" x 9 1/2", paperback, 173 pages. At least 100 photographs, halftone black & white, no color. The quality of the reproductions is not high but the low cost and volume of photos gathered in this small volume makes up for it.
Most of the photos feature women wearing various kinds of fetish style high heeled footwear. There is also a small selection photos depicting women boxing, which was unheard of at the time. A small percentage of photos feature bondage. A smaller percentage feature nudity, including a couple males in submissive postures. Also, corsets, masks, stockings, garter belts, riding crops, and pony play are depicted. Some of Guyette's advertisements for his business illustrated.
Absolutely worth the cost.