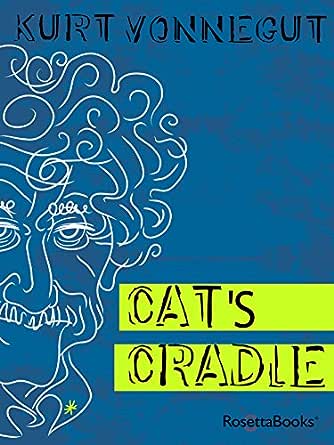 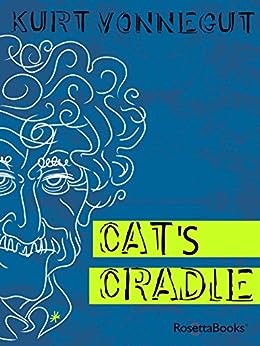 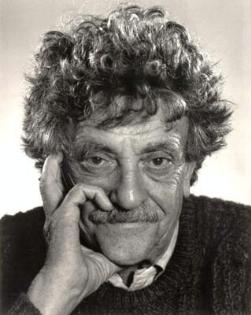 Cat’s Cradle (1963) is Vonnegut's most ambitious novel, which put into the language terms like "wampeter", "kerass" and "granfalloon" as well as a structured religion, Boskonism and was submitted in partial fulfillment of requirements for a Master's Degree in anthropology, and in its sprawling compass and almost uncontrolled (and uncontrollable) invention, may be Vonnegut's best novel.

Written contemporaneously with the Cuban missile crisis and countenancing a version of a world in the grasp of magnified human stupidity, the novel is centered on Felix Hoenikker, a chemical scientist reminiscent of Robert Oppenheimer… except that Oppenheimer was destroyed by his conscience and Hoenikker, delighting in the disastrous chemicals he has invented, has no conscience at all. Hoenikker's "Ice 9" has the potential to convert all liquid to inert ice and thus destroy human existence; he is exiled to a remote island where Boskonism has enlisted all of its inhabitants and where religion and technology collaborate, with the help of a large cast of characters, to destroy civilization.

Vonnegut's compassion and despair are expressed here through his grotesque elaboration of character and situation and also through his created religion which like Flannery O'Connor's "Church Without Christ" (in Wise Blood) acts to serve its adherents by removing them from individual responsibility. Vonnegut had always been taken seriously by science fiction readers and critics (a reception which indeed made him uncomfortable) but it was with Cat’s Cradle that he began to be found and appreciated by a more general audience. His own ambivalence toward science, science fiction, religion and religious comfort comes through in every scene of this novel.

Kurt Vonnegut (1922-2007) is one of the most beloved American writers of the twentieth century. Vonnegut's audience increased steadily since his first five pieces in the 1950s and grew from there. His 1968 novel Slaughterhouse-Five has become a canonic war novel with Joseph Heller's Catch-22 to form the truest and darkest of what came from World War II.

Vonnegut began his career as a science fiction writer, and his early novels--Player Piano and The Sirens of Titan--were categorized as such even as they appealed to an audience far beyond the reach of the category. In the 1960s, Vonnegut became closely associated with the Baby Boomer generation, a writer on that side, so to speak.

Now that Vonnegut's work has been studied as a large body of work, it has been more deeply understood and unified. There is a consistency to his satirical insight, humor and anger which makes his work so synergistic. It seems clear that the more of Vonnegut's work you read, the more it resonates and the more you wish to read. Scholars believe that Vonnegut's reputation (like Mark Twain's) will grow steadily through the decades as his work continues to increase in relevance and new connections are formed, new insights made.

Author Kurt Vonnegut is considered by most to be one of the most important writers of the twentieth century. His books Slaughterhouse-Five (named after Vonnegut's World War II POW experience) and Cat's Cradle are considered among his top works. RosettaBooks offers here a complete range of Vonnegut's work, including his first novel (Player Piano, 1952) for readers familiar with Vonnegut's work as well as newcomers.

R. P. Cotta Jr.
5つ星のうち3.0 Classic Satire
2018年7月7日 - (Amazon.com)
形式: ペーパーバックAmazonで購入
Okay -- three stars. That's what I think OTHER readers will think of this book. I think it is worth four stars. But this review is supposed to try and be helpful to you, dear reader, so I do not wish to inflate how good YOU might think this book is.

But let's face it: It's Vonnegut. Satirical. Whimsical. Deadly earnest in a half-joking kind of way. Not particularly optimistic about the future of us People, and not, apparently, particularly fond of us either. Three stars of Vonnegut is worth maybe four stars of Wolfe, maybe five stars of Koontz. Just three stars of Twain, though.

So about this book: it's a quick read. There are like 127 chapters in the story, but they all fit (in my edition) into just 287 pages. 287 very spacious and roomy pages. The chapters tend to be about a page-and-a-half long, some just a couple of paragraphs. Vonnegut bounces right along, telling the story of John, as John seeks to write a biography of one of the father's of the atom bomb. (A fictional father.)

The work no doubt contains some of Vonnegut's more creative ideas: ice-9; Bokononism; Mona Aamons Monzano, the most beautiful girl ever; a completely incomprehensible dialect of what might have once been the English language; and, of course, the end of the World. The story starts out innocently enough, but one thing just leads to the next and the next and before you know it, you will find yourself enmeshed in a world of utter ridiculousness, but you had better take it seriously or you may end up on "the hook." Pronounced "hy-u-o-ook-kuh."

So, not too deep, but deep enough. Not too, too funny, but totally, irreverently so. Not too long, but not too short. You will most likely enjoy this book.
続きを読む
43人のお客様がこれが役に立ったと考えています
レビュー を日本語に翻訳する

James B.
5つ星のうち5.0 So it goes again.
2017年1月11日 - (Amazon.com)
Amazonで購入
Kurt Vonnegut is a man who saw which way the world was turning and was none to pleased by it. This is one of many novels covering his themes of how flawed human society is, regardless of what it tries to pursue.

The story follows a reporter named John. John wants to write a book Felix Hoennikker, who was one of the principle engineers of the atomic bomb. While investigating him, he meets many things: a new religion called Bokononism, a stone angel, a philosophical dwarf, a Hoosier, and a chemical more dangerous than the A-bomb itself.

Vonnegut spares no one in this volume, taking shots at scientists and the religious with equal fervor. Vonnegut writes some of the best absurd ism in literature, and anyone should be glad to read this. Enjoy.
続きを読む
30人のお客様がこれが役に立ったと考えています
レビュー を日本語に翻訳する

Bryan Desmond
5つ星のうち4.0 See the cat? See the cradle?
2017年6月2日 - (Amazon.com)
Amazonで購入
This was technically my second book by Vonnegut -- my first being 'God Bless You, Dr. Kevorkian" -- but I consider this to be my real intro to his work, as Kevorkian was rather short and maybe not the best introduction to Kurt's style. And as far as introductions to prolific authors go, I thought it was excellent. I'm excited to explore Kurt's catalog after this.

Cat's Cradle is a story about the end of the world, but I promise you it is not like any apocalyptic story you have read. This is the kind of book that is stuffed with information to contemplate, while at the same time being totally skimmable. Essentially its the kind of books that goes fast, but has so much more to pick up on subsequent reads (I definitely plan to read it again). Cat's Cradle offers an interesting analysis of religion through Bokononism, in which believers maintain that they are all instruments of God's Will, whether they wish to be or not.

While the plot is entertaining and the ideas worth contemplating it was really Kurt's voice that propelled me through the story. Right from the beginning I latched onto his dry wit and rolled with it through to the end. As it happens, I really enjoyed it. Er, rather, as it was meant to happen.

Daniel Conway
5つ星のうち5.0 Like zooming out
2017年11月10日 - (Amazon.com)
形式: ペーパーバックAmazonで購入
What a trip of a novel, I won't go as far as saying it will change your life but you may indeed think about various human institutions in ways you never have before upon its completion. Reading it was an experience, like living in a completely different culture or taking an acid trip. Its power is not so much in its storyline and plot but in the individual details. It's like seeing the world reflected in a funhouse mirror, except this bizarre rendering now shows you all the things about religion, science, groupthink etc. you never noticed before. What I love perhaps most is the fact that two people can read this book and walk away with completely different ideas of what this book is trying to do. You could interpret it as being pro-religion or anti-religion, pro-science or anti-science, because the truth is that it is none of these things. It just shows the flaws in our collective conceptions of religion or science, it does not demonize either in and of itself. Truly a remarkable read.
続きを読む
9人のお客様がこれが役に立ったと考えています
レビュー を日本語に翻訳する

T. Edmund
5つ星のうち4.0 but I'm pretty confident that was intentionally rather than flawed writing per ...
2018年6月26日 - (Amazon.com)
Amazonで購入
I'm finding Cat's Cradle tricky to review. Being the second Vonnegut piece I've read (after Slaughter-house Five) I'm in the unusual position of not being too sure what is classic Vonnegut style and what is unique to Cat's Cradle.

Generally the two stories seem similar in intent, Cat's Cradle dances around politics and religion where Slaughter-house danced around war. The overt plot of Cat's Cradle is MC Jonah is planning to write a book about the atomic bomb, but ends up experiencing and writing something quite different. The story is presented in short chapters at times leaping through time, but more often leaping through the books of 'Bokonan' a fictional religion prominent in Cat's Cradle.

Overall, the book is witty and worthy allegory/satire. At times the writing style (which I can only assume was written to be similar to the Cat's Cradle - simultaneously complex and pointless) made it hard to really connect with the story and characters fully, but I'm pretty confident that was intentionally rather than flawed writing per se.
続きを読む
4人のお客様がこれが役に立ったと考えています
レビュー を日本語に翻訳する
Amazon.comのカスタマーレビューを見る(1,223) 5つ星のうち4.3
click to open popover
Amazonプライム会員ならお急ぎ便、日時指定便が使い放題
さらに、映画もTV番組も見放題。200万曲が聴き放題 。クラウドに好きなだけ写真も保存可能。
> プライムを無料で試す