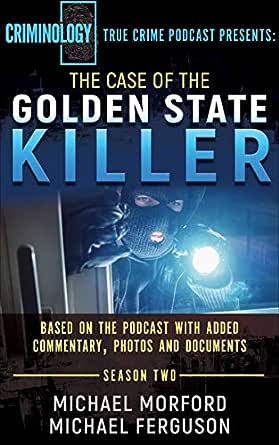 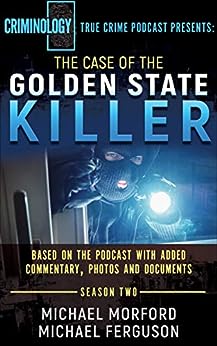 The Case of the Golden State Killer: Based on the Podcast with Additional Commentary, Photographs and Documents (Criminology True Crime Podcast Book 2) (English Edition) Kindle版 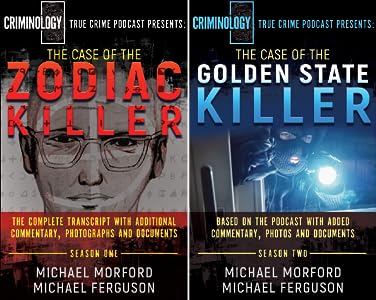 In addition to being a co-host of Criminology podcast, Mike Morford is a true crime researcher, consultant, blogger, and victim's advocate.

California Dreaming
5つ星のうち4.0 Informative Read on the GSK
2018年10月17日にアメリカ合衆国でレビュー済み
Amazonで購入
My opinion on rating anything -- movies, art, books, you name it -- has changed over the years. I used to be too hard with my review scores and nitpick on everything. Nowadays, I tend to go a bit easier on creators, maybe because I've gotten old. Or maybe it's because I've become nice. OK, scratch that "nice" idea; it'll never happen. On a good day maybe I'm just not so mean, I suppose.

I could complain about the editing, the writing style, and perhaps the occasional repetitive nature of CGSK. And I guess that I am a bit. I really think that this book could've used a really good editor to clean up the writing before it was released in the Kindle format. However, I do understand the time-sensitive nature of this story; a very good suspect was arrested during the spring of 2018 and so these authors probably wanted to get this out as quickly as possible to get ahead of the curve.

As you probably already know, the Visalia Ransacker (VR) is probably the East Area Rapist (EAR) is definitely the Original Night Stalker (ONS) whose name has been tidied up into "The Golden State Killer." The MO and signature of the VR is so similar to these later UNSUBs that most detectives agree they are the same, even without any fingerprint or DNA evidence from the VR crimes. But DNA definitely ties the EAR and the ONS together as one. So, if you catch one you've probably caught them all.

But I've read many books now on this subject -- five maybe? -- which is highly unusual for me. I watch a lot of true crime, and if I see a documentary on, say, a serial killer, I'll often search this site for books on the subject, and pick out the one that has the best ratings. Then I might buy it and get reading. Outside of books about Paul Bernardo and Karla Homolka -- the so-called "Ken and Barbie Killers" -- I generally only read the "best" book on any one subject and then move on to the next serial killer read. Kind of like how the GSK attacks a couple once and then moves onto his next unsuspecting victims. But since I live fairly close to Sacramento and have been following this case extensively, especially after an arrest was made, I've made an exception and decided to read everything I can get my hands on. Well, at least my "digital hands" I suppose since I prefer reading in the Kindle format.

But if you've been following this case, are as interested in it as I am, and have read other books on the subject, I still recommend giving this one a try as well. There are details here that you won't read anywhere else. As an example, there are quite a few verbatim interviews included with living victims that give some real inside information as to what those victims endured. And I really liked the book when it (finally) got around to describing the ONS crimes, as obviously those were the most heinous committed by this serial killer.

If you watch enough interviews with detectives and psychologists about criminals, many of those professionals will say something like, "You know, there really is no such thing as unimportant crime. What often happens is a criminal might start out doing petty crimes, say, shoplifting, and often he continues to escalate. Some of those move on to murder, and some of those move onto serial murder. So never underestimate crime." You won't read much here about the crimes of the Visalia Ransacker -- I have in other books -- but I really thought a lot about "escalation" while reading this one. The UNSUB moved from B & E's to rape to murder and then to serial murder. And it is really interesting thinking about the evolution of MO of the UNSUB as well. Paul Holes, one of the detectives who was instrumental in solving the series, is interviewed and that interview is included here. But he says something like, "It's interesting how this guy changed his MO as he went, and how he learned from past mistakes. This made it difficult to catch him." Those aren't his exact words most likely but they're fairly close. And really accurate.

I'll go with a recommendation on "The Case of the Golden State Killer," even if you've already read other books on the subject. This one is definitely worth a read for additional information, information you probably can't get anywhere else.
続きを読む
13人のお客様がこれが役に立ったと考えています
違反を報告
レビュー を日本語に翻訳する

Amazon Customer
5つ星のうち5.0 Well written book that amplifies the MO of the Killer
2020年2月18日にアメリカ合衆国でレビュー済み
Amazonで購入
Just a easy book to read, and extremely interesting book about the very distinctive modus operandi of a serial killer. The end story of the way law enforcement eventually caught the Killer was why I purchased the book, but it was the detailed descriptions of his very specific crime indicators that kept my interest. A great book to highlight the importance of any killer (or rapist) crime activities and indicators. I can certainly get a insight of the terror that the community went through during the crime spree. All in all a great book, graphic detailed and recommend.
続きを読む
3人のお客様がこれが役に立ったと考えています
違反を報告
レビュー を日本語に翻訳する

David M. Ballew
5つ星のうち3.0 Good Work Undermined
2020年7月30日にアメリカ合衆国でレビュー済み
Amazonで購入
The book is thoroughgoing and appears well researched. However, it is riddled with punctuation errors that would never make it past a good editor. You may say this doesn't matter. I say it does. We who use Kindle are lovers of reading. Reading depends on written language, and two fundamental building blocks of written language are grammar and punctuation. If the authors respect their audience (or potential audience), they need to bring us a clearly punctuated text that may be read smoothly and without annoyance.
続きを読む
1人のお客様がこれが役に立ったと考えています
違反を報告
レビュー を日本語に翻訳する

Trip Trey
5つ星のうち5.0 This story defines EVIL.
2020年9月25日にアメリカ合衆国でレビュー済み
Amazonで購入
This is a story that has to be told. So much can be learned from this.
You will find a bunch of writing errors, should have had a better proofer.
A must read for True Crime fans.
続きを読む
1人のお客様がこれが役に立ったと考えています
違反を報告
レビュー を日本語に翻訳する