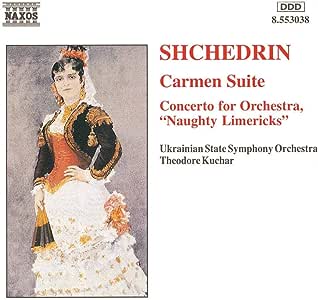 Some of you skating enthusiasts may remember the "battle of the Carmens" a few years ago, in which every female skater at the World Championships seemed to be using this music (Katerina Witt won, by the way). It's not really Bizet's Carmen, but rather a ballet based on tunes from the opera and arranged by Shchedrin for lots of strings and percussion. He originally wrote it for his wife, a prima ballerina at the Bolshoi, but the score is so skillfully done and entertaining in its own right that it has become almost as popular as Bizet's original--and it's much better for skating. All of the most famous melodies are here, including several from Bizet's other works. At budget price, this performance offers a good 45 minutes of fun. --David Hurwitz

equals added value
5つ星のうち4.0 Carmen Suite and "Naughty Limericks"
2009年6月15日に英国でレビュー済み
Amazonで購入
The two works coupled here seem, at first, very different: one is an arrangement of a nineteenth century classic whilst the other is an original work. They do, however, both share a certain eccentricity and whimsy. Both sound like the work of a young man not out to shock but happy to produce the unexpected and humorous.

The Carmen Suite arranges music from Bizet's Carmen for Strings and Percussion. It is Shchedrin's most famous work - depressing for him maybe given the amount of original material he has composed. Even so, Shchedrin's version is arranged into a ballet of about 45 minutes and his strange orchestration actually seems to provide more weight and profundity in the more lyrical passages whilst sounding a touch eccentric in some dance numbers. Unusual as it is it works as a whole and doesn't trivialise the original. It manages to sound as Russian as it does Spanish. One thing to note is that both Shostakovich and Khachaturian turned down the opportunity to write / arrange the ballet music leaving the opportunity to a bright young thing like Shchedrin.

"Naughty Limericks" is the title of his first concerto for orchestra. This is a brief (about 8 minutes), rather jazzy, dissonant and upbeat work. Given the apparent disparity of style compared to Carmen it may be that some listeners will be put off by this work - I personally enjoyed both.

I've docked a star because, whilst the performances are fine, this is rather a short disc. Naxos have since recorded his fourth and fifth concertos for orchestra - it would have been easily possible to add the charming and nostalgic fourth concerto to this disc.

No matter; the main item here is the Carmen Suite and, if you're not outraged by the unusual orchestration it comes well recommended.