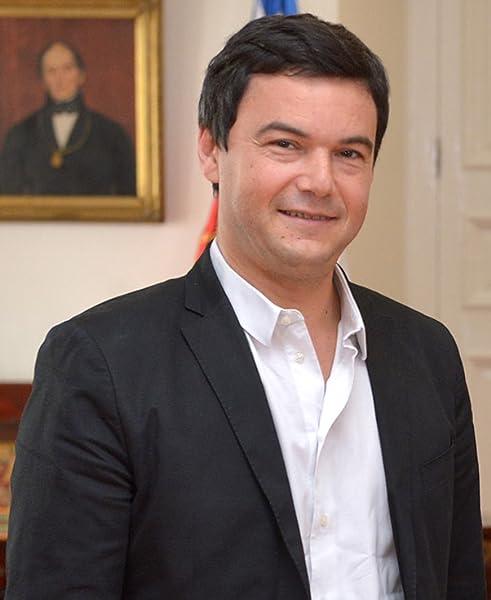 “It seems safe to say that Capital in the Twenty-First Century, the magnum opus of the French economist Thomas Piketty, will be the most important economics book of the year―and maybe of the decade. Piketty, arguably the world’s leading expert on income and wealth inequality, does more than document the growing concentration of income in the hands of a small economic elite. He also makes a powerful case that we’re on the way back to ‘patrimonial capitalism,’ in which the commanding heights of the economy are dominated not just by wealth, but also by inherited wealth, in which birth matters more than effort and talent.”―Paul Krugman, New York Times

“A sweeping account of rising inequality… Eventually, Piketty says, we could see the reemergence of a world familiar to nineteenth-century Europeans; he cites the novels of Austen and Balzac. In this ‘patrimonial society,’ a small group of wealthy rentiers lives lavishly on the fruits of its inherited wealth, and the rest struggle to keep up… The proper role of public intellectuals is to question accepted dogmas, conceive of new methods of analysis, and expand the terms of public debate. Capital in the Twenty-first Century does all these things… Piketty has written a book that nobody interested in a defining issue of our era can afford to ignore.”―John Cassidy, New Yorker

“An extraordinary sweep of history backed by remarkably detailed data and analysis… Piketty’s economic analysis and historical proofs are breathtaking.”―Robert B. Reich, The Guardian

“Piketty’s treatment of inequality is perfectly matched to its moment. Like [Paul] Kennedy a generation ago, Piketty has emerged as a rock star of the policy-intellectual world… But make no mistake, his work richly deserves all the attention it is receiving… Piketty, in collaboration with others, has spent more than a decade mining huge quantities of data spanning centuries and many countries to document, absolutely conclusively, that the share of income and wealth going to those at the very top―the top 1 percent, .1 percent, and .01 percent of the population―has risen sharply over the last generation, marking a return to a pattern that prevailed before World War I… Even if none of Piketty’s theories stands up, the establishment of this fact has transformed political discourse and is a Nobel Prize–worthy contribution. Piketty provides an elegant framework for making sense of a complex reality. His theorizing is bold and simple and hugely important if correct. In every area of thought, progress comes from simple abstract paradigms that guide later thinking, such as Darwin’s idea of evolution, Ricardo’s notion of comparative advantage, or Keynes’s conception of aggregate demand. Whether or not his idea ultimately proves out, Piketty makes a major contribution by putting forth a theory of natural economic evolution under capitalism… Piketty writes in the epic philosophical mode of Keynes, Marx, or Adam Smith… By focusing attention on what has happened to a fortunate few among us, and by opening up for debate issues around the long-run functioning of our market system, Capital in the Twenty-First Century has made a profoundly important contribution.”―Lawrence H. Summers, Democracy

“It is easy to overlook the achievement of Thomas Piketty’s new bestseller, Capital in the Twenty-First Century, as a work of economic history. Debates about the book have largely focused on inequality. But on any given page, there is data about the total level of private capital and the percentage of income paid out to labor in England from the 1700s onward, something that would have been impossible for early researchers… Capital reflects decades of work in collecting national income data across centuries, countries, and class, done in partnership with academics across the globe. But beyond its remarkably rich and instructive history, the book’s deep and novel understanding of inequality in the economy has drawn well-deserved attention… [Piketty’s] engagement with the rest of the social sciences also distinguishes him from most economists… The book is filled with brilliant moments… The book is an attempt to ground the debate over inequality in strong empirical data, put the question of distribution back into economics, and open the debate not just to the entirety of the social sciences but to people themselves.”―Mike Konczal, Boston Review

“What makes Thomas Piketty’s Capital in the Twenty-First Century such a triumph is that it seems to have been written specifically to demolish the great economic shibboleths of our time… Piketty’s magnum opus.”―Thomas Frank, Salon

“[A] 700-page punch in the plutocracy’s pampered gut… It’s been half a century since a book of economic history broke out of its academic silo with such fireworks.”―Giles Whittell, The Times

“Thomas Piketty of the Paris School of Economics has done the definitive comparative historical research on income inequality in his Capital in the Twenty-First Century.”―Paul Starr, New York Review of Books

“Bracing… Piketty provides a fresh and sweeping analysis of the world’s economic history that puts into question many of our core beliefs about the organization of market economies. His most startling news is that the belief that inequality will eventually stabilize and subside on its own, a long-held tenet of free market capitalism, is wrong. Rather, the economic forces concentrating more and more wealth into the hands of the fortunate few are almost sure to prevail for a very long time.”―Eduardo Porter, New York Times

“Thomas Piketty’s Capital in the Twenty-First Century is a monumental book that will influence economic analysis (and perhaps policymaking) in the years to come. In the way it is written and the importance of the questions it asks, it is a book the classic authors of economics could have written if they lived today and had access to the vast empirical material Piketty and his colleagues collected… In a short review, it is impossible to do even partial justice to the wealth of information, data, analysis, and discussion contained in this book of almost 700 pages. Piketty has returned economics to the classical roots where it seeks to understand the ‘laws of motion’ of capitalism. He has re-emphasized the distinction between ‘unearned’ and ‘earned’ income that had been tucked away for so long under misleading terminologies of ‘human capital,’ ‘economic agents,’ and ‘factors of production.’ Labor and capital―those who have to work for a living and those who live from property―people in flesh―are squarely back in economics via this great book.”―Branko Milanovic, American Prospect

Thomas Piketty is Director of Studies at L’École des Hautes Études en Sciences Sociales and Professor at the Paris School of Economics. He is the author of Capital in the Twenty-First Century.