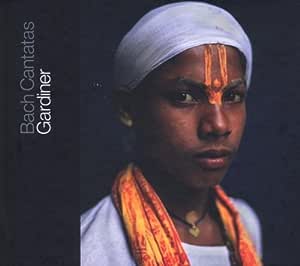 Bert Kleinkauf
5つ星のうち5.0 Gardiner's Bach Cantatas Are Glorious
2018年7月9日 - (Amazon.com)
Amazonで購入
I consider the Gardiner's series (along with Suzuki and Koopman) essential to anyone who loves Bach cantatas. Gardiner's attention to detail shines through. His collaborators are all outstanding. You can't go wrong with this volume, whether a Bach cantata veteran or novice.
続きを読む
レビュー を日本語に翻訳する

DAVID BRYSON
5つ星のうち4.0 NOT QUITE THE BEST
2008年10月26日 - (Amazon.com)
Musically, this selection of seven cantatas is exceptionally interesting for including compositions dating all the way from 1707/8 to 1732. Three each are for the fourth and fifth Sundays after Trinity, while one, (BWV 131), is for an unknown occasion. I learn from Gardiner's liner-note that BWV 71 is the only cantata that reached print in the composer's own lifetime, having been written for the inauguration of the Muehlhausen Town Council and having impressed two burgomasters with the financial resources to commission the work. More interesting from my own point of view is the question Gardiner raises regarding what he perceives as a narrowing in Bach's idiom and style after the early cantatas. This is something that Gardiner appears to regret, but if I may say so I take the opposite view. For me, it was a matter of the composer finding himself and settling on the form of expression that best suited his infinite musical gift. I think of Brahms's D minor concerto in this respect too - it is a mighty composition, but its composer did not follow up its style afterwards. I would even venture to say that I don't find Bach totally convincing when he attempts a `dramatic' mode. Tonal representation, changes of pace and mood - all that was Handel's forte, and I believe Bach recognised early that it was not his own vocation.

Another thing Gardiner tells us is that he and his colleagues had just been giving some Bach cantatas at the Albert Hall Proms, and that this had disturbed their equilibrium to some extent. I find that very easy to understand and to sympathise with, and it accounts entirely for what I would have found anyway to be a slight dip in the quality of the first of these two discs. The first two cantatas sound rather heavy-footed to me, lacking the crispness that has been such a notable feature of the dozen or so other issues from this series that I have so far collected. Whether it was a matter of them or of me, I started to find myself less satisfied than usually in other respects too. The recording seems a bit cavernous for one thing. That in turn does no favours to the very first number, a contralto aria prone to hootiness of tone that the recording unkindly exaggerates. Matters improve gradually, with a welcome `lift' coming at the 16th track, the tenor aria Lass mich kein Lust, but the real step-change has to await the second disc.

There is a complete change of all four vocal soloists for the second disc, and now at last we are back to the world of this great `pilgrimage' as I have been coming to know and love it. Everyone and everything sounds fresher; and in particular I took very favourably to the bright tone of the tenor Kobie van Rensburg. None of these seven cantatas features any of the knockout numbers that bloom like spectacular and unique blossoms (e.g. Wir eilen from BWV 78 or Schlummert ein from BWV 82) along the route of this pilgrimage, at least if like myself you are not swept off your feet by the more `dramatic' efforts. However the name of the game is beauty, artistry and consistency as always, and on the second disc I found myself back on familiar ground, deeply impressed as ever.

Gardiner's long `blog' consists of two separate essays this time, marking the visits to Tewkesbury Abbey and to the church of St Blaise at Muehlhausen. I still don't understand what was upsetting him at the start, indeed I'm not even very sure what he is talking about. However these essays deserve to be read with the closest attention for the insights they provide both into the music `as such' and into the maestro's own view of it. They are both deeply scholarly and deeply personal, a great musician's interpretation of a greater, and as a privilege conferred by this series they rank next only to the music itself.

Recommended with a few reservations just for once, but I for one would not want to be without this set.

Teemacs
5つ星のうち5.0 Rien à dire
2008年7月24日 - (Amazon.com)
The French expression means "nothing to say" and is commonly used when all superlatives are exhausted. This is the way I'm feeling about the Gardiner cantata series. Some have a few rough edges (understandably, given the rush to get to a new place, set up, rehearse and then perform), but the standard is amazingly high and the quality of performance is first-rate. And they look so great on the shelf. Gardiner has given us something wonderful, which we can enjoy for years and years to come.
続きを読む
4人のお客様がこれが役に立ったと考えています
レビュー を日本語に翻訳する
Amazon.comのカスタマーレビューを見る(4) 5つ星のうち4.5
Amazonプライム会員ならお急ぎ便、日時指定便が使い放題
さらに、映画もTV番組も見放題。200万曲が聴き放題 。クラウドに好きなだけ写真も保存可能。
> プライムを無料で試す