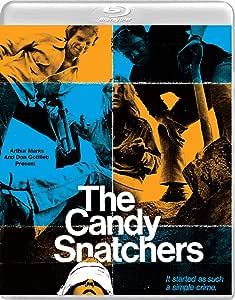 Allen Garfield's #1 fan.
5つ星のうち5.0 A true exploitation classic. A must for SoCal Sleaze Queen, Tiffany Bolling.
2020年1月31日 - (Amazon.com)
I purchased this from the Vinegar Syndrome website - for $35! Claimed it was exclusive to the site. Dang. Anyway, take advantage of the $20 price tag and BUY NOW!

The picture and sound is amazing - vastly superior to the Subversive DVD from years back - unfortunately, VS wasn't able to port the extras on that release to the bluray, including a great commentary track by Tiffany Bolling - in one her best perfomences - who hates this movie, and the entire production/filming. Oh, well. (It still would've been great if it was included here - Bolling has the gift of the gab: see her interviews/commentary on her Arthur Marks' films.)

Jessie (Tiffany Bolliing of Calender Girls and Bonnies's Girls: available as a bluray double feature), her brother Alan (Brad David) and their friend Eddie (Vince Martorano of Cornbread, Earl And Me) are a gang of small time thugs who get a bright idea one day – they decide to kidnap a high-school girl named Candy (Susan Sennett of Big Bad Mama) and stash her away in hopes of extorting a half a million dollars in diamonds from her father, Avery (Ben Piazza of The Bad News Bears), who manages a large jewelry store. The pull up behind poor Candy one day and grab her, tie her up, and blindfold her in the back of their van. They drive her up to the hills outside of Los Angeles and there they bury her alive, with a small pipe coming out of the hole she's been put in so that she won't suffocate. The crooks think they've gotten away with it and that their plan will go off without a hitch, but they're wrong – a young boy named Shawn Newton (the director's son, Christopher Trueblood, credited on screen only when the end credits role as 'Christophe') has seen them and he knows exactly where Candy is located. Too bad for Shawn he can't talk and that his parents mistreat him so often.

They notify Avery about the kidnapping and the required ransom and then they sit and wait at the drop off point for him to show up with the goods. Soon though, the crooks realize that Avery isn't coming and they don't know why and this soon becomes a very big source of stress for them. Surely a father would gladly pay whatever price necessary to save his daughter's life, right? And what about Shawn? Will he be able to convince his abusive mother that someone is buried out there in the hills or will she continue to ignore him and focus only on what he does wrong, rather than what he does right?

A few seriously cool twists and an equal amount of stand out sleazy set pieces makes The Candy Snatchers a pretty tense viewing experience. The movie starts off with a bang and is paced really well and because of that it's able to keep up the momentum until the end credits hit. Some clever foreshadowing in the form of the opening theme song and the bumper sticker on the three hoods' van gives us some clues of what is to come but for the most part the film really benefits from the unpredictability of the whole affair. Besides its roughie/exploitation/crime genre, this is a (albiet, dark) comedy of errors.

Director Gordon Trueblood worked mostly in television before helming this film, though he did later go on to write Jaws 3-D, but his experience scripting tight cop shows like Adam-12 and The Streets Of San Francisco probably helped him learn how to make the most out of a low budget and a limited amount of shooting locations. The script from writer Bryan Gindoff keeps you guessing right up until the end. Performance wise, Bolling steals the show as the vicious Jessie but Martorano as the only sympathetic character out of the three thugs turns in a pretty decent job here as well. Sennett is fine as the damsel in distress, but without much dialogue her role is limited. Surprisingly enough, 'Christophe' is able to portray a lot of emotion and some genuine childlike innocence in his completely silent role which adds a really unique element to this one that further sets it apart from other roughie/exploitation/crime films of the same era.

Intro (1:24, HD) features director Guerdon Trueblood, who reveals his early intent to title the picture "Candy Snatch," which was shut down by the powers that be.

"A Dark Film" (15:15, HD) returns to Trueblood, who shares his early education, including film history study in France, which helped him to find the tone of "The Candy Snatchers." Assured of his own screenwriting abilities, Trueblood jumped at the chance to direct, and he shares production origins, including financing and the writing duties. Casting is detailed, including work from his own son, Christopher, who was treated with care and a lot of directorial patience. Trueblood remains very proud of "The Candy Snatchers," almost defensively so, bringing out a quote from Quentin Tarantino, who's a big fan of the movie.

"Snatching the Role" (10:55, HD) is a conversation with Vince Martorano, who explore his early interest in acting, finally persuaded to move to L.A. when work on "The Candy Snatchers" was offered. While sharing tales from the happy shoot, Martorano focuses on the pressure to make a career, finally acquiring an agent and additional work. The interviewee shares memories from the premiere of "The Candy Snatchers," and addresses a few of the movie's controversies.

"Digging Up the Past" (9:15, HD) sits down with producer Gary Adelman, who recounts his initial forays into the film business and his time on "The Candy Snatchers." Casting is inspected and locations are recalled. Adelman also shares the troubled distribution history for the feature, which was only widely released in the south.