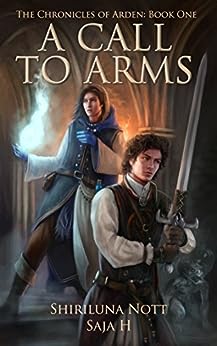 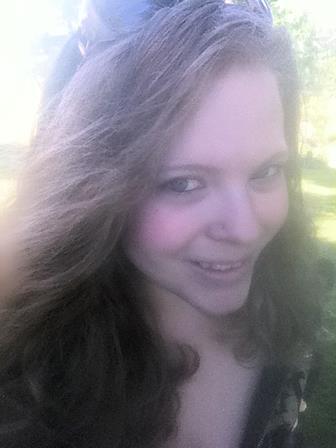 A Call to Arms: Book One of the Chronicles of Arden (English Edition) Kindle版

His parents are dead, his sister is missing, and he's been left the sole provider for his two younger brothers. With a war brewing in the east and no guarantee of surviving another brutal winter, Gib's life is plagued by uncertainty. To make matters worse, he suddenly finds himself uprooted from his home and drafted into the army.

Forced to leave his siblings behind, Gib reports to Silver City, where he enrolls in the legendary Academy of Arden. An outsider and misfit, Gib struggles to blend in among the highborn city folk. His charming candor eventually wins him a handful of friends—an enigmatic mage trainee with a secret, a young girl who has defied tradition by joining the military, and a prince looking to escape his stifling life. But his new-found comrades may not be able to help when Gib alone overhears a traitorous plot—a scheme so horrible that if seen to fruition, all of Arden will suffer for it. It's up to Gib to convince the High Council of Arden to act, to stop the terrible danger, before it's too late. 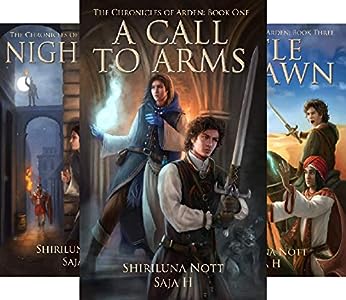 Kindle Customer
5つ星のうち5.0 Well worth the time
2016年9月13日に英国でレビュー済み
Amazonで購入
One of the best reads I have enjoyed in a long time. would highly recommend it and can't wait to start the next one. The writer draws you into the the story and you feel and experience what the characters are like. couldn't put it down
続きを読む
違反を報告する
レビュー を日本語に翻訳する

Kindle Customer
5つ星のうち5.0 I loved this book
2016年8月4日に英国でレビュー済み
Amazonで購入
I loved this book! I'm so glad I took a chance on it. Great story and characters. I just couldn't put it down (I read both this and the next book in two days). Can't wait for the next one!
続きを読む
違反を報告する
レビュー を日本語に翻訳する

Melanie
5つ星のうち5.0 Loved it
2014年10月21日にカナダでレビュー済み
Amazonで購入
Fantasy isn’t my genre of choice to read, but the cover art and ‘look inside’ preview drew me in and I couldn’t set the book down after that.

A Call to Arms is about an impoverished boy named Gib. Gib works on his family’s farm, struggling to support his younger brothers, but when he finds himself drafted into the army, he has to leave his brothers behind and travel into the city. While training to become a sentinel, Gib meets a delightful cast of characters, all of which I grew attached to while I was reading, especially Joel and Kezra (I really could identify with their individual plights).

Gib stumbles around his new environment, often times making hilarious blunders as he learns how to live among the highborn citizens of Silver City. The authors of A Call to Arms did a good job of getting into Gib’s head and showing the reader exactly what he was feeling. Everything Gib experienced, I felt like I was there with him.

Overall, the book was a great read. I loved the characters, the plot was interesting and wasn’t at all what I was expecting from an “epic fantasy” novel (it wasn’t your typical “let’s go save the entire world from this horrible evil” story that is told time and time again). I’ll be purchasing the next installment of the series. I can’t wait to see where Gib’s journey leads him next.

M.C. Ewen
5つ星のうち5.0 Please tell me book two is due soon!
2015年5月1日にカナダでレビュー済み
Amazonで購入
I absolutely loved this book. The characters were believable, and the plot was well-paced and interesting. While there is no cliff-hanger ending, I'm eagerly waiting for book two!
続きを読む
違反を報告する
レビュー を日本語に翻訳する