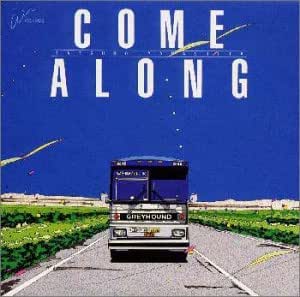 ケネディ (KNDY)
5つ星のうち5.0 I absolutely love the "COME ALONG" series and the first is quite awesome!
2019年10月7日に日本でレビュー済み
Amazonで購入
Back on March 21, 1980, Yamashita Tatsuro’s first compilation album titled “COME ALONG” was released.

The plan to release a compilation album was not made by Yamashita but it was the decision of RVC at the time to create an album primarily for promotional purposes. But when the album was played at music stores, many people inquired about it and RVC contacted Yamashita if they could release it as an album.

Yamashita was reluctant to release it because the album would become part of his original catalog. But it was agreed that it could be released but as a cassette only release.

When the album was released as a a cassette, it was later released on vinyl and then CD after Yamashita moved to the Alpha Moon label regardless if Yamashita preferred to release it as cassette only.

The goal was to feature a disco DJ on side A (featuring Kobayashi Katsuya a.k.a. “Mr Music” as the DJ) and Side B which reproduces Hawaii’s KIKI radio station and features Kobayashi as the DJ and at the beginning of the track for “WINDY LADY”, the narration featured a phone call by a 17-year-old Takeuchi Mariya (the popular city pop singer who would marry Yamashita in 1982) and also Mariya announcing a celebrity jeep race at the end of “CIRCUS TOWN”.

The album would feature a compilation of Yamashita Tatsuro’s music from 1977-1979 (from his albums “CIRCUS TOWN”, “SPACY”, “GO AHEAD!” and “MOONGLOW”) but would include a DJ announcing the songs in English and you would hear the DJ at the end of the music on the tracks featured on SIDE A, while SIDE B would emulate Hawaii KIKI radio, along with phone callers and surf report.

In 2002, when Yamashita’s older work from the RCA/AIR era were being re-released and remastered, many people wondered if “COME ALONG” would be released?

When Yamashita Tatsuro checked on it, because the album was made as a rush primarily for promotional purposes, there were audio quality problems, especially when it came to poor stereo balancing. But it was decided to remaster “COME ALONG” as an official item and to feature Suzuki Hideto’s design that was featured on the non-approved LP and CD as the main jacket.

Also, while the music was mixed, they had to use the original narration on top of it, mix it again and while the sound quality could not be improved in analog, technology was able to bring the narration closer to the original via digital mastering.

The CD insert is not a full booklet but features a double sheet featuring the lyrics and also transcript of the radio narration. And also liner notes by Yamashita Tatsuro about “COME ALONG” written back in 2002 for the remastered CD release.

So, there is a relaxing feel of just playing this album with the radio narration, as it’s like a nostalgic trip to the past. And it truly is considering this was made back in 1980, but I could see the appeal of how this was used as a promotions for record stores to play at the time. If I heard “COME ALONG” playing, I probably would have requested for it to be release, as I would have purchased it back then. And so, I’m glad this was released on CD!

But overall, it’s great to have all three “COME ALONG” albums remastered and released. If you are a Yamashita Tatsuro fan, it’s definitely worth it!