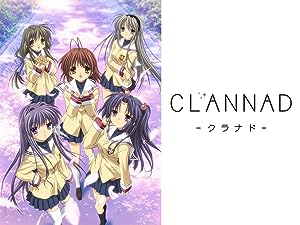 somewhere in England
5つ星のうち4.0 Lovely animation and emotional involvement
2015年9月7日に英国でレビュー済み
Amazonで購入
The title is meant to imply "Family" but the creators became confused....
This one started as a pc game and comes from the same stable as Kanon. We follow a number of girls with problems who are helped by our hero - note that this one is a family show, there is no "fan service". The emotions may run a little high at times (I know of males in their late teens shedding a tear...) but this one is gentle compared to the severe emotions of the follow up, Clannad-After Story.

There is a funny little side story regarding a girl on her own who makes a robot of sorts. You might get this if you also watch After Story but otherwise try not to worry about it, it is a very complex bit of plotting.

Instead enjoy the youngsters trying to make a go of bureaucratic school administration and the triumph of getting together a school drama society. There is some comedic violence, deliberately in the style of a video game (with bonuses awarded) but the violent reputation of one of the characters if one of the problems to be oversome, it is essential to the story. There is no excess of blood.

The concept of the school "ghost" does not translate from Japanese culture too well- the "spirit" is not a ghost as understood in the West but something else which does get communicated in the story quite well.

Lovely animation, great characters, a storyline which is complex but sticks to one character at a time so that as one character is helped we suddenly jump to concentrate on another character. Nice animation and reasonable family fare but do observe the 12 certificate for strong emotions and comic violence.
続きを読む
4人のお客様がこれが役に立ったと考えています
違反を報告
レビュー を日本語に翻訳する

DanH1989
5つ星のうち5.0 CLANNAD an awesome Anime
2011年8月6日に英国でレビュー済み
Amazonで購入
CLANNAD is one of many great anime made by key.
it is based on the final year in high school for the dilinquant Tomoya Okazaki who is tired of both his life and the town he lives in, that is until he meets a shy Nagisa Furukawa on his way to school and befriends her whilst helping her revive the schools drama club.

Without giving away any spoilers it is hard to put into words of how good this anime (as with Key's other work (Kanon, Air)) actually is. This anime would be perfect for anybody who is a fan of Animes with great character personality builds (even in secondary and minor characters) and anybody who find any school based shows interesting, this searies of CLANNAD also has many aspects to grip the veiwers to it, using Comedy, drama and part of a tale that leaves the veiwer wondering of its significance (which is explained in the afterstory Series of CLANNAD). The veiwer is also bought into the story with the excellent usage of music for any major scene.

This is a great purchase and i would suggest any anime fans and anybody interested in veiwing animes to purchase CLANNAD and CLANNAD afterstory, also i would recommend Kanon, and Air which are 2 of keys other animes.
続きを読む
3人のお客様がこれが役に立ったと考えています
違反を報告
レビュー を日本語に翻訳する

Sarah~
5つ星のうち4.0 A beautiful Anime series!~
2012年3月26日に英国でレビュー済み
Amazonで購入
I first watched this series online and once I finished, I immediately wanted the box set as I love this Anime SO much no word in the English language even BEGINS to describe my passion for this Anime!~
It truly touched my heart and I felt captivated by the wondrous and beautiful story line and the characters were so brilliantly portrayed; I cried many times watching this series AND the second series Clannad After Story~'

The only reason I gave this product four stars and not five is because I live in the UK and I tried this product out yesterday and it wouldn't play in my DVD player saying it was 'The Wrong Region'.
So, I am having to buy a multi-regional DVD player to watch this product which isn't bad it's just annoying that I didn't realise this before.

But the overall Anime series deserves as MANY stars as it is possible to give!~
I highly recommend this Anime to people out there!~
It's beautiful and amazing!~
DEFINITELY my favourite Anime~
続きを読む
3人のお客様がこれが役に立ったと考えています
違反を報告
レビュー を日本語に翻訳する

DC
5つ星のうち5.0 Unique series.
2011年7月5日に英国でレビュー済み
Amazonで購入
It is by far the best anime I've seen. Animation is smooth, beautiful backgrounds, characters and soundtrack ( which is amazing ). Clannad is different than any other anime. Script is great however I would personally done certain things differently. It seems like this anime floats between happy moments and sad, it's like those two emotions intertwine.

For me, a little bit let down was a fact that Okazaki ( main character ) being a delinquent doesn't act as one. Instead he appears to be lost and angry that's why he acts in certain ways ( not gonna spoil anything :)) . Another let down was a English voice cast. Main character sounds like an adult (tough guy) and Kyou sounds like a voilent village girl. It spoils a little bit of atmosphere in some episodes. But I gotta say they tried their best with some emotional scenes. I would advise to watch original japanese language with subtitles, it feels natural that way.
I would like to hear voice actor from Kanon ( english voice actor for character - Yuichi Aizawa ) as Okazaki in Clannad. Because he did great job with Kanon! And as Nagisa ( Clannad ) voice actress that dubbed Ayu from ( Kanon ). She sounds adorable...

Concluding : you will get great package that will make you laugh hard and make you sad inside. Possible to shear a tear or two.