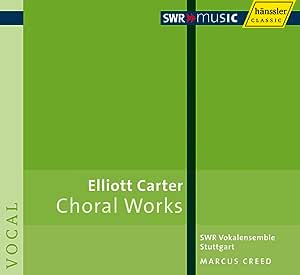 oldbrownhat
5つ星のうち4.0 Good singing, but balance could be better
2012年5月20日にアメリカ合衆国でレビュー済み
Amazonで購入
Having recently rediscovered Elliott Carter's choral music, I decided to see what had been recorded. There seem to be only three CDs available- this recent one, one from 1997 with the John Oliver Chorale and one by The Gregg Smith Singers from 1994. I bought this CD first, then, being a little disappointed, the John Oliver. The Gregg Smith I haven't heard, and at the prices currently being asked for it, I won't be. (It did get a very good review from another listener, though. If a copy comes up at a decent price I'll likely buy it.)

Of the two, it's a toss-up. Both are good for different reasons. This CD is technically the better sung. The voices are more mature and firm but I feel it's let down by the actual recording. In the Tarantella for men's voices and two pianos, the pianos are simply too loud and the words are obscured. I was initially a bit concerned that the choir being German, their English wouldn't be up to the mark, but although some accent is discernable, their English is very good indeed, if not quite idiomatic. (As a singer myself, I often wonder just how good N. American choirs' pronunciation of other languages is to native speakers.)

The John Oliver Chorale recording suffers occasionally from "soprano flutter", but the balance is better. That ensemble is I think quite a bit bigger than the Vokalensemble Stuttgart. Here again the recording doesn't quite do them justice; to my ears it lacks presence. I ran the tracks through my recording software, lifting a little around between 3 and 7K and it improved things, but this is likely not an option for most listeners.

If I had to live with just one recording, I'd probably choose the John Oliver. As always, though, "YMMV", depending on what you prefer. And who knows, The Gregg Smith rec. might be the best of all!