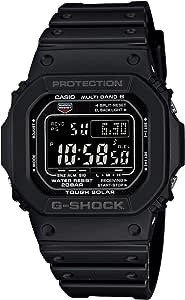 afrogonaboob
5つ星のうち5.0 HOW IS THE SCREEN?
2015年4月28日にアメリカ合衆国でレビュー済み
スタイル: G-SHOCK単品Amazonで購入
I had a really hard time deciding between this watch and the identical version with the regular screen. There are tons of youtube videos and pictures on the internet that try to describe the effectiveness and visibility of the inverted display, but cameras can be tricky. I wanted to offer my detailed experience of this watches inverted display. I will not be talking about the watches functions, for that you can reas the ~400 reviews on the other watch that is identical to this one, but with a regular display. I will say that the watch functions flawlessly.

I bought this watch because I wanted the inverted display for style reasons and I thought that there were enough people online saying that the watch was easy enough to read. I though that the people who were reviewing the watch as not easy to read maybe had bad vision. But I was shocked at how dim the display actually is, (let me explain, I love this watch). When I first got it I was planning on returning it, Amazon has free returns, because it was SO dim. Like surprisingly dim. However, after using it for a few weeks I have found that there are practically no light situations in which I cannot read it. Let me explain.

I broad daylight, or outside shadows, or a rainy day the watch is as clear as the picture on amazon. perfectly easy to read, just as any other watch at any reasonable angle of viewing. Indoors, in well lit situations, with a light overhead or a light nearby it is just as easy to read, not quite as clear as the picture, but it will be still extremely clear in these situations from any angle, have no doubt about this. However, in dim indoor lights, such as a romantic restaurant or a dimly lit cafe, or a room with a lamp in the corner the display is slightly less visible; the display in these situations can still be VERY easily read but it requires you to view the display straight on. It seems like the way the display works the numbers are dimmer when viewed at an angle in low light situations, but can still easily be read. Some situations where this watch cannot be read are at night outside with not much ambient light, or say you are indoors at night and in a room with no light on but you can still see because there is ambient light from a lamp in a different room you will not be able to read this watch. I have also found that if you cannot make out small print text on paper in your lighting situation then you will not be able to read this watch.

However, why do I love this watch even when it sometimes cannot be read? Because of the auto EL feature. If you place the watch at a 0 degree angle and then turn the watch 40 degrees the watch face will light up, but only in low enough light situations, so it doesn't ruin the battery. This feature makes the watch to be able to be read in all light situations. Also, it is really well calibrated, much better than most smart watches these days; the watch will not come on with random shaking or while working with your hands, but only a very deliberate turning of the wrist. This feature has to be turned on manually, and will stay on after that.

I hope this review has served to alleviate any concerns about whether the watch face is easy to read or not. My opinion is that it IS easy to read. But amazon has free returns if you think it isn't

One more thing that is really cool is the atomic function. I have found that the watch is never more than about 1/10th of a second off the official time. Really cool!!!
続きを読む
123人のお客様がこれが役に立ったと考えています
違反を報告
レビュー を日本語に翻訳する

bratti
5つ星のうち5.0 Found The One
2018年3月26日にアメリカ合衆国でレビュー済み
スタイル: G-SHOCK単品Amazonで購入
My search for a modern look, black, lightweight, digital display, month-date-weekday, nightlight watch is over.

I’ve bought three Suunto watches, returned them for the dial seemed too large and put pressure on my wrist as I flexed my wrist.

I’ve bought and returned the Nixon Unit SS as it was paperweight heavy for my wrist.
続きを読む

5つ星のうち5.0 Found The One
2018年3月26日にアメリカ合衆国でレビュー済み
My search for a modern look, black, lightweight, digital display, month-date-weekday, nightlight watch is over.

I’ve bought three Suunto watches, returned them for the dial seemed too large and put pressure on my wrist as I flexed my wrist.

I’ve bought and returned the Nixon Unit SS as it was paperweight heavy for my wrist.

David Miller
5つ星のうち5.0 Awesome watch!!!! 5 stars.
2015年6月14日にアメリカ合衆国でレビュー済み
スタイル: G-SHOCK単品Amazonで購入
This watch is awesome!! Well worth the money! Tough, blacked out, and solar. No need to replace the battery every 2 years losing the water-seal. This watch is from Japan, and came in a cool box with a small pillow. The watch has a soft rubber band, its feels very smooth and comfortable, unlike those HORRIBLE RESIN and SILICON bands. Today was 92 and I didn't even notice the band. Even though its blacked out, it is easy to read the time and has a light for darkness. Some people have whined about the display, that's why they have pictures on Amazon before you buy it. I had the DW5600MS-1CR but returned it when Casio said the battery only last 2 years. Then when its replaced you might lose the seal. For $50 more I got this incredible watch. I am still amazed how comfortable the rubber band is, I don't understand why they use resin bands, they are very uncomfortable in the heat, and when its cold they stiffen up.The buttons on this watch are very easy to use and your fingers wont go numb from setting the watch. The blacked out face looks great, its one bad a$$ watch. It came with a high charge and I put it in direct sunlight for 20 minutes to keep it highly charged. I looked at Seiko solar and Citizen Eco Drive, but I know they cant handle being under water, and you have to be careful not to crack the watch face. For $141 it is well worth the price. It also has a great size, and a perfect fit. The display size is very easy to read, and simple to set, you don't need a degree from MIT to figure out the watch. This watch deserves 6 stars and the seller is great as well. If you are going to spend $100 on a Gshock, spend the extra money and get this watch, you wont regret it.
続きを読む
22人のお客様がこれが役に立ったと考えています
違反を報告
レビュー を日本語に翻訳する

samsiteone
5つ星のうち4.0 Great looking watch but I chose the normal display instead.
2019年7月11日にアメリカ合衆国でレビュー済み
スタイル: G-SHOCK単品Amazonで購入
Great looking watch, but a little hard to read. I'm always looking at my watch and fiddling with it so I got the positive display one and I'm happy with it. But if you don't mind the slightly harder to see display, this is the watch for you.
続きを読む

5つ星のうち4.0 Great looking watch but I chose the normal display instead.
2019年7月11日にアメリカ合衆国でレビュー済み
Great looking watch, but a little hard to read. I'm always looking at my watch and fiddling with it so I got the positive display one and I'm happy with it. But if you don't mind the slightly harder to see display, this is the watch for you.
このレビューの画像