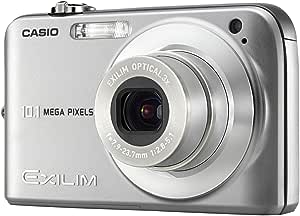 When I bought my first and only digital camera a good few years back, I thought that 4 mega-pixels was the end of the world. That camera would take 13 high quality pictures, but would also probably need at least one change of batteries to take them.

Things have clearly moved on since then - 10 mega-pixels (plus) and with the insertion of a 4gb card (at least 2gb in my view is a must) you would need to buy up the W H Smiths photograph album section to store them all! At the same time, the included Li-ion battery (and charger) means you can snap away to your hearts content without worrying that you will run out of juice or film. All in all, this package sets you up for all the informal photography you could want.

Don't get me wrong - although I say 'informal photography' it can and does do good serious photography, particularly with the use of a tripod. No pocket digital, however can match the SLR, however, with its specialist lenses. But then you could hardly expect it to do so.

What it can do best is to make use of its electronic wizardry. There are all types of easy shot set-ups with some clever tricks performed in camera, if you do not want to play with the pictures on a PC. I am embarrassed to say that one of better aspects is a really good anti-shake function. On a windy day, its even beats a reasonably sturdy tripod, although there is a minor loss of general picture quality.

For the price, the camera is probably exceptional in comparison with others. There are a few minuses, however, as follows.

1. The name 'Casio' does not have the cache, perhaps of 'Nikon' or the like, but so far as I am concerned, it is not the name which really matters.

2. Movie quality is fairly basic in all respects, but I certainly did not buy a digital camera for that purpose, so it is a criticism of little implication.

3. As is so often the case, the menus are far from intuitive, and you often end up with things on screen (they do not affect the photograph taken) which are annoying and difficult to get rid of. Some functions, however, are not explained at all, or at least not properly explained. This, however is a fault with just about every piece of modern electronic equipment.

Mr. T. Abbas
5つ星のうち4.0 Cracking little camera.
2008年3月19日に英国でレビュー済み
Amazonで購入
My 4th digital camera and it gets the colours near to perfect.
Good sharp photos - no complaints.

Video on HQ settings is adequate but if you want good quality video then
buy a dedicated camcorder.

The device is smaller than I expected.If you've got big thick hands like
me then beware - the on/off button is too small, the SET button requires
fingernail action, the usb compartment is very very fiddely.

I'm gonna have to order a spare battery because the 2.5 hour recharge
isn't good enough.

J.burns
5つ星のうち1.0 exilm camera faulty, No customer service from Casio,
2009年3月26日に英国でレビュー済み
Amazonで購入
Bought this cassio 10.1 meg camera just over one year ago from amazon as I allready owned the 5 meg one. went on a Caribean Cruise this Camera did not work, it then worked when I got home, one year later I went to a concert it worked for a about fifteen minutes there, then stopped working till after I got out from the concert, I realised then that when this camera got warm it failed,I have since met two other people who have this problem with casio. I contacted Casio several times over this past two months and they have yet to respond in any way. I will not touch their products again, also the Quality only seems good until you compare it to similar products.
続きを読む
2人のお客様がこれが役に立ったと考えています
役に立った
フィードバックを送信中...
フィードバックをお寄せいただきありがとうございます。
申し訳ありませんが、お客様の投票の記録に失敗しました。もう一度試してください。
違反を報告
レビュー を日本語に翻訳する

Jon Boy
5つ星のうち4.0 Small, easy to use compact digital camera
2007年11月6日に英国でレビュー済み
Amazonで購入
I bought this mainly for it's compact size and after reading the good Amazon reviews. The camera is indeed small (fits in back jeans pocket for nights out) and packs a hefty 10 mega pixels (although this eats memory if you use the 10mp setting). With hindsight I would go for the cheaper EX-Z 75 as it's much cheaper, tiny, has 7 MP which is plenty and still gets rave reviews.
続きを読む
10人のお客様がこれが役に立ったと考えています
役に立った
フィードバックを送信中...
フィードバックをお寄せいただきありがとうございます。
申し訳ありませんが、お客様の投票の記録に失敗しました。もう一度試してください。
違反を報告
レビュー を日本語に翻訳する

R. K. Woodhatch
5つ星のうち1.0 Some useful features but poor quality images
2009年8月4日に英国でレビュー済み
Amazonで購入
I bought this camera just over two years ago. I was very unhappy about the image quality (lack of sharpness) from the first one I received from Amazon so I returned it for replacement. I should explain that I needed the 7 frames per second continuous shooting for sports coaching purposes. The second camera was marginally better than the first so I accepted it. I have regretted that decision ever since. The image quality is nowhere near as good as my old Casio QV-3500EX which this camera replaced. It seems to me that the lens quality is suspect. The QV-3500EX sported a Cannon lens.
Anyhow, the EX-Z1050 has just died, and in some respects I am pleased as I can now justify to myself the purchase of a replacement. It will not be a Casio. I cannot fault Amazon in this, they behaved impeccably at the time of the initial purchase.
続きを読む
1人のお客様がこれが役に立ったと考えています
役に立った
フィードバックを送信中...
フィードバックをお寄せいただきありがとうございます。
申し訳ありませんが、お客様の投票の記録に失敗しました。もう一度試してください。
違反を報告
レビュー を日本語に翻訳する
その他の国際レビューを読み込む

David
5つ星のうち5.0 Great camera!
2008年3月9日に英国でレビュー済み
Amazonで購入
Before buying this camera I looked through most of amazon, a digital camera magazine and anything else i could get hold of to find a compact digital camera that took good macro pictures and would be good for a complete novice for under £150. After about 5 hours of searching I found this camera and immediately wanted it. After looking at the reviews I ordered it and it came within 3 days (on free delivery!). I've had it for 2 days now and so far it's great. As other reviews have said it does have a slightly grainy screen but if you turn the quality onto fine its ok. With the 38 best shot modes a novice like me can take great looking pictures at the click of a button. The software provided makes it easy to put onto the computer and it also comes with a tv adapter which is great.

All in all this camera is great for novices and produces great pictures.

Team B
5つ星のうち5.0 This little camera rocks
2007年7月4日に英国でレビュー済み
Amazonで購入
I actually purchased this camera as a birthday present for a technophobic relative who has a 35mm film camera. I thought it was time for them to move onto the digital format.

The camera is well built and feels solid. The display is excellent but what you are really paying for is the spectacular photo quality. This little beast produces stunning pictures.

The camera comes with the USB cable, a TV cable (so you can output those photos and videos), battery and charger. I would definitely recommend getting a case for it.

The icing on the cake is ease of use. When setting up the camera, there was no need to refer to the manual.

Derek Cooper
5つ星のうち4.0 my new camera
2008年1月9日に英国でレビュー済み
Amazonで購入
I wanted a camera small enough to have with me all the time and this one is certainly that. If it were any smaller I think it would be difficult to use, but its size is just about ideal.
Image qulity is very good, stabilisation works very well as long as you make an effort to try to keep the camera still. I've produced some very sharp and detailed images using the macro mode hand held and landscapes are very well exposed, sharp and detailed with good colour saturation.
It starts up very quickly and you can capture action suprisingly well for this type of camera, ducks landing etc.
I was a bit worried because of another review regarding the lens being poor but I can't say I noticed the quality being anything less than very good, I can't keep saying excellent because are you comparing results with DSLRs or or £300+ compacts? This is a £100 pound compact camera that you can carry around without noticing and which produces great images.
続きを読む

Davey
5つ星のうち5.0 !00% quality at a low price
2007年7月3日に英国でレビュー済み
Amazonで購入
I purchased this item without any hesitation. I remeber wanting the previous model z1000 as the quality of that camera was also amazing. When i seen this for £130 on amazon I said to my self excellent price and much cheaper than most other places.

This Camera has excellent quality superb colours and detail. I took a picture on its highest setting and zoomed it a its full optical level, I then put the image onto the computer and istantly i seem what quality it was. I then zoomed in with photo editor and the detail level was amazing.

I would suggest this camera as a good quality reasonable priced for most people, you will not be dissapointed

David S. Wilson
5つ星のうち5.0 Small, robust and very desirable
2007年7月30日に英国でレビュー済み
Amazonで購入
Bought this to replace a Sony W17 and use alongside a Panasonic FZ7 super zoom camera. Great price from Amazon (£199 at Argos, anyone?) and an excellent camera. Best feature is the virtually instantaneous start up, followed by the surprisingly useful "best shot" option; in my limited use so far it works well. Small enough to hang around my neck on a lanyard means it's always available. Metal body and well protected screen means it should last a while. A good buy at a great price.
続きを読む
10人のお客様がこれが役に立ったと考えています
役に立った
フィードバックを送信中...
フィードバックをお寄せいただきありがとうございます。
申し訳ありませんが、お客様の投票の記録に失敗しました。もう一度試してください。
違反を報告
レビュー を日本語に翻訳する