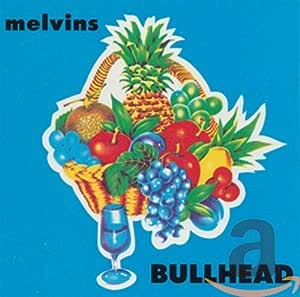 After three albums filled for the most part with quick song bursts and the occasional longer track, the eight-song long Bullhead found the Melvins stretching out a bit more at points, this time allowing the heavily stoned tempos plenty of time to really sprawl all over the place. There are fewer sudden shifts between fast and slow moments as well, and a lot more pure lava-flow beat-over-head feedback sludge and noise. It's not all ten mph deliberation, though - "Zodiac" shows the trio at full speed and blasting aside anything that might be so foolish as to get in its way, not to mention one unhinged Osbourne vocal lead. If grunge was achieving breakthrough status in Seattle, it was being perfected in its rawest sense on this album. Opening cut "Boris" does all this in excelsis -- the band's longest recorded song at this point, nearly ten minutes long, it practically drips from the bongwater of eight million potheads, with Osbourne invoking his own brand of demons over the deep crawl of the music. Osbourne here really has got the dramatic, theatrical Ozzy Osbourne attitude down, with the occasional double-tracked vocals adding to the off-kilter intensity of the performances. Crover again shows his worth on the drums -- he plays things slow most of the time but, crucially, never once sloppily -- while Black keeps the bass going, however relatively unheard under Osbourne's guitar attack. "It's Shoved" is the not-so-secret highlight of Bullhead, Crover's brisker drum work and Black's sharp bass playing heralding a wild lead-guitar melody and a great ensemble performance. However, efforts like "Anaconda," with its slowly uncoiling power, and the intense "If I Had an Exorcism," which gets all the more wired and wound up as it goes (Black's bass here is some of her best), are no slouches. ~ Ned Raggett, All Music Guide