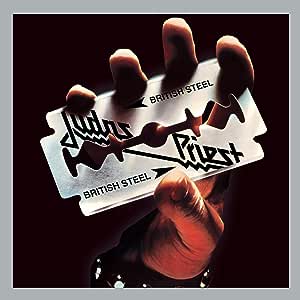 The guitar riff from "Breaking the Law" is one of the most recognizable from early 1980s heavy metal. Though British Steel sounds dated these days, it's also a classic slice of metal, one of the best from a band that defined the genre in the late '70s and early '80s. Everything that ultimately became characteristic of heavy metal is here, from the lightning-fast riffs on "Rapid Fire," the anthemic "Metal Gods," and "United" to the obligatory party song "Living After Midnight" to the equally obligatory youth-rebellion song, "You Don't Have to Be Old to Be Wise." British Steel is unquestionably Priest at their peak. The 2001 remastered reissue includes two bonus tracks--a previously unavailable studio selection called "Red, White & Blue" and a live take on "Grinder." --Genevieve Williams

M. Shuttleworth
5つ星のうち5.0 Such good memories
2020年8月29日に英国でレビュー済み
Amazonで購入
If like me you remember this coming out its easy to understand why its now considered a classic. After 40 years though I thought id heard enough 'Living after Midnight' and 'Breaking the Law' to last me a lifetime. But having just bought this to complete my JP CD collection - heavens know why this wasn't in it from the start, possibly because I played the vinyl to death, but now I have the CD version I put it on and it immediately struck me how great it still is, fantastic memories of blasting this out in my bedroom as kid, headbanging to BTL at the school end of term 'disco' and to 'Rapid Fire' in Bolton's greatest Rock club SPACE CITY, great memories. And still, with fresh ears I rediscovered one or two songs I least recall and now think that 'Steeler' in particular is such a killer track. If you're a Millennial metaller I'd still say you'll like it whether you're into Death, Black, Speed, Grindcore..... etc etc as its one of those 'Godfather' albums, without albums like this the evolution of Rock and Metal would have looked completely different but certainly non the better. Metal Gods? - how prophetic!
続きを読む
違反を報告
レビュー を日本語に翻訳する

Sean
5つ星のうち4.0 A must have in any music collection
2018年2月4日に英国でレビュー済み
Amazonで購入
One of many defining moments in the career of the Juggernaut that is Judas Priest. To younger fans, outside of the hit single, might feel this album is a bit mellower than the likes of Painkiller but don't be mistaken. This is a heavy album with all the hooks and vocal genius that makes a Judas Priest record. British Steel is another example of the band continuing to evolve with the times but keeping the foundation of what makes Priest... Priest.
続きを読む
2人のお客様がこれが役に立ったと考えています
違反を報告
レビュー を日本語に翻訳する

James Bennet
5つ星のうち5.0 Classic metal, and well worth a purchase. Play loud!
2013年4月2日に英国でレビュー済み
Amazonで購入
1980′s British Steel is probably the best known Judas Priest album, with classic metal anthems such as “Breaking the Law”, bringing them mainstream success, helped my a change in image, and a shift in tone from their previous outing, “Hell Bent For Leather“.

Lead singer Rob Halford’s vocals, while still stunning, suffer from poorly written material, and are not quite as sharp as previously. Similarly, the drums are uninspiring, and the guitar riffs lack complexity, giving the album a sense of repetitiveness.

Indeed, while there are many excellent tracks, there is are a few definite “fillers” such as “United” and “Red White and Blue”.

However, there are some truly catchy guitar riffs such as “Rapid Fire” Metal Gods” and “Grinder”. The basslines throughout were excellent, in particular on “The Rage”.

Unusually, the 2001 re-master is in fact quite good (I own the re-master on CD, and the original on Vinyl), and, as a bonus, comes a very heavy live recording of “Grinder”. Even to this day, the album is timeless. Classic metal, and well worth a purchase.

O-mindcrime
5つ星のうち4.0 Contemporary Live Reworking
2010年5月21日に英国でレビュー済み
Amazonで購入
Seeing Rob on YouTube recently left me with an impression of a singer seemingly bored and disconnected with what the rest of the band are doing. He appears to shuffle on and off when it's his cue to sing and his `bent double' and stiff demeanour gives you acute back ache just watching him.

So I approached this with some degree of caution. Happily, when faced with material as good as Steel it's hard not to rise to the occasion and on 'Rapid Fire' through 'Metal Gods' the band and Rob sound magnificent. As with most of their older stuff played live it now has a contemporary twist, meaning in simplistic terms it's heavier than the proverbial battering ram. This really kicks of as a celebration by the band, as the gusto in the performance carries them nicely through Breaking The Law and the crunching Grinder - even Rob is in a good mood - `Hello everybody' he chirps uncharacteristically after the first two songs. He even manages to stand up straight at one point, propped up on a microphone stand that clocks in at 7 or 8 foot long (I'm not kidding).

However where the contemporary approach is less successful is on the subsequent more melodic tracks such as You Don't Have To Be Old To Be Wise, United and Living After Midnight, which are more pop/rock songs. Rob's new gravelly and aggressive vocal style, where he clips words, snarls and remains uncomfortably within the high range, lends itself well to the uptempo more aggressive thrashy numbers like Freewheel Burning, Rapid Fire and Steeler, but it sits much more incongruously on the more melodic slower tracks. Also, in terms of the DVD set, the YouTube disconnected Rob does surface. During United the close up on him facing away from the audience (which is an ironic way to deliver a song called `United') shows him tired and drained, whilst the 'Freewheel Burning' section, delivered seated from the motorbike, is bizarre as he hides his face behind his arm throughout much of the song. What makes this odd is that come You've Got Another Thing Coming the more accessible Rob of old is back and he clearly having a ball, now stalking the stage like a caged panther and clearly connecting with the audience. It's almost as if he has taken his 'Metal God' persona too seriously and lost his high camp sense of humour in the process.

So in summary there is a lot of this that works well because it's celebratory and brutally heavy and, for the most part, the band is having a lot of fun running through an album that marked the pinnacle of their creativity. However there are a few parts where Rob's new vocal style doesn't sit as well with the more 'poppy' Steel material. Ultimately, though, when Steeler is unrelengtingly pounding from the speakers it scarcely seems to matter.
続きを読む
1人のお客様がこれが役に立ったと考えています
違反を報告
レビュー を日本語に翻訳する