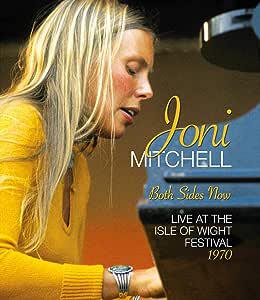 Clive Gilbert
5つ星のうち5.0 Joni Mitchell Live at The Isle of Wight 1970 - Blu-ray
2018年10月16日に英国でレビュー済み
Amazonで購入
I was at this festival so I was very interested to purchase this Blu-ray disc. I remember watching Joni & I became a big fan (still am). The contents of this disc is brilliant. You can either watch Joni just singing her songs or you can watch Joni speaking about the concert as well as singing her songs.I would recommend the later as it shows how Joni overcome the 'hostile' audience. A must watch for Joni fans.
続きを読む
5人のお客様がこれが役に立ったと考えています
役に立った
フィードバックを送信中...
フィードバックをお寄せいただきありがとうございます。
申し訳ありませんが、お客様の投票の記録に失敗しました。もう一度試してください。
違反を報告
レビュー を日本語に翻訳する

Sugano
5つ星のうち5.0 I was at this festival, I had paid to be there, quite happily.
2019年2月15日に英国でレビュー済み
Amazonで購入
And I witnessed the unfolding events.
This is a fair representation of what actually happened.
Not Joni's best performance but she got through a very dark and difficult day.
She was in the wrong time slot playing the wrong music to the wrong people with the wrong attitude but she got through that, even the stage invasion and the photographers.
Well done Joni, well worth buying.
A good watch!

Kees de Lange
5つ星のうち5.0 Stellar performance
2018年11月4日に英国でレビュー済み
Amazonで購入
Gave me an intimate view of how Joni had to struggle real hard to win over the rough IoW audience and she really did! Hope this is not the last masterpage of the late Murray Lerner.
続きを読む
役に立った
フィードバックを送信中...
フィードバックをお寄せいただきありがとうございます。
申し訳ありませんが、お客様の投票の記録に失敗しました。もう一度試してください。
違反を報告
レビュー を日本語に翻訳する
その他の国際レビューを読み込む

BowieFan
5つ星のうち4.0 Almost perfect - but...
2019年2月17日にカナダでレビュー済み
Amazonで購入
The documentary and the concert are typical Joni: excellent. I highly recommend this purchase.
My only three gripes - and the reasons I did not give this disc five stars - are these:
(1) The disc enables you to play the concert itself. However, it is in 4:3 (square) format, even though the concert was filmed on 16mm or 35mm film, which is widescreen
(2) Even though 16mm or 35mm film is an excellent source, the creators of this Blu-Ray only scanned it in 1080i quality, not 1080p like the vast majority of Blu-Rays. That means it’s only half the video quality it could have been.
(3) Although the disc is reasonably-priced, there are no extras other than being able to play the concert without the interview inserted for the documentary. It would have been nice to have a Gallery features. For example, there are numerous high-quality still photos available of this performance. Ticket stubs or the concert poster or program would’ve been nice in a Gallery too.

Randy Remote
5つ星のうち5.0 Awesome Joni
2018年9月16日にアメリカ合衆国でレビュー済み
Amazonで購入
Watched the Blu-ray last night. Two thumbs up. Joni is at her hippie-goddess peak, her voice is stellar. She moves from guitar to piano to dulcimer, navigating a difficult situation by the seat of her maxi-dress, somehow managing to win over an unruly, massive audience (to her own surprise, I think). She earns a standing O, and comes back for a somewhat surprising encore. Given that this footage is nearly 50 years old, the quality of the picture and sound is quite excellent (mostly*). The disc contains two options: you can watch the documentary (76 min) or the concert uninterrupted (56 min). I watched the doc; it contains all the music of the concert, and I was happy to find that the songs are played in full, without interruption. In between songs, there is footage of the crowd, and cuts to a 2003 interview with Joni sitting next to a grand piano, and reflecting on what it was like to be there. She plays the piano a little in the interview, but doesn't really seem to connect with it. Curiously, the end credits say that the soundtrack is available on Rhino Records. I can find no evidence that this is actually the case. RR
*(there are some minor problems with the sound on a few of the songs, due to the way they recorded it, using separate mics for the recording and PA. The opening track has very little guitar volume, same for the vocal on a couple of the songs, which are fixed 1/2 way through, and all of "A Case of You" which is played sans picture during the closing credits)
続きを読む
52人のお客様がこれが役に立ったと考えています
役に立った
フィードバックを送信中...
フィードバックをお寄せいただきありがとうございます。
申し訳ありませんが、お客様の投票の記録に失敗しました。もう一度試してください。
違反を報告
レビュー を日本語に翻訳する

Music Sense
5つ星のうち5.0 What a talent !
2018年9月22日にアメリカ合衆国でレビュー済み
Amazonで購入
When I was a teenager in the 1960s I thought Joni was just a shrieking woman in pain. My girlfriend had her records and thought she was great. It took me quite some time to come around to that thinking, but I certainly did and this concert just confirms it. This venue was not a good one for this style of music, but she fought threw it, along with her being so nervous. Listening to her music in her prime is what this concert is all about and any fan of hers will not be disappointed. What a talent !
続きを読む
12人のお客様がこれが役に立ったと考えています
役に立った
フィードバックを送信中...
フィードバックをお寄せいただきありがとうございます。
申し訳ありませんが、お客様の投票の記録に失敗しました。もう一度試してください。
違反を報告
レビュー を日本語に翻訳する