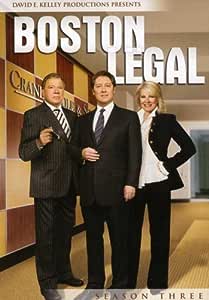 As before, cases vary from minor to major. Story arcs include the murder of a judge's wife (with Ashton Holmes as the suspect and Katey Sagal as his mother) and an outrageous peeping tom (David Dean Bottrell) with a jones for Shirley (Candice Bergen). Denny Crane (William Shatner), meanwhile, finds love with diminutive attorney Bethany (Meredith Eaton-Gilden)--and her mother, Bella (Delta Burke). And Alan (James Spader, who scored a second Emmy to add to the one he received for The Practice) helps former co-worker Jerry "Hands" Espenson (Christian Clemenson) out of a few jams. By the end of the season, Jeffrey is gone, while Jerry returns to Crane, Poole & Schmidt.

Throughout the year, the firm tackles a variety of timely issues, ranging from religious freedom to immigration law. Reporter Gracie Jane (Jill Brennan), a Nancy Grace doppelg舅ger, also comes in for some ribbing. Aside from recurring characters, like Jane Lynch (as a sexual surrogate), the third season counts a few actors behind the camera, such as Eric Stoltz ("Dumping Bella") and Adam Arkin ("Nuts"), from David E. Kelley's Chicago Hope. The featurette Character Witness looks at the year's most colorful characters--turns out Spader and Clemenson are old friends--and Out of Order looks at the judges, notably Gail O'Grady, Howard Hesseman, and Shelley Berman. --Kathleen C. Fennessy

lunas
5つ星のうち5.0 Comedic and thought provoking, superb acting and great new characters
2019年12月23日に英国でレビュー済み
Amazonで購入
I couldn’t fault this program, it is so well done and the characters get better and better. It couldn’t be written now as there would be complaints about the sexual harassment, by both sexes but the balance of humour and politics which is still current left a hole when we had watched it all.
続きを読む
違反を報告
レビュー を日本語に翻訳する

S. Bentley
5つ星のうち5.0 Shocking! Outrageous!
2008年5月18日に英国でレビュー済み
Amazonで購入
The third series of Boston Legal is a bit odd. As usual we have characters appearing and disappearing at the drop of a hat, as usual we have Alan and Denny's male bonding and breaking of the fourth wall, but we also have a preponderance of murder cases that shift the series away from its usual bounciness and political commentary. There's a big murder case at the start that serves as the introduction for new lawyers Jeffrey Coho and Claire Can'trememberhersurname who Shirley has brought in from the New York office. Coho, whilst well-acted and an intriguing character, is just too like Alan Shore, whilst lacking Alan's special quirks, to feel a worthwhile addition to the show. Claire starts out as too aggressive but by the end of the series, due to her interactions with shy transvestite lawyer Clarence, is quite a fun character (but enjoy her while she lasts because come Season 4 she's gone). The murder case itself is intriguing but too salacious and dark - it feels a lot like previous plotlines from BL's predecessor, the Practice - much as Denny's strategy for dealing with the murder case in the last episode does. It's not bad television, per se, but it's not really Boston Legal.

Similarly the middle section of the series features Shirley being kidnapped. Again it feels like something done in the Practice even if the execution, so to speak, is very different.

So with this in mind, why five stars? Well, because the show is excellent otherwise. James Spader and William Shatner continue to act their socks off and charm us with their portrayals of Alan Shore and Denny Crane, the seedy, oddball lawyers who pursue judges, an aggressive little person and her mother, and take on the government. They play the comic stuff brilliantly but manage to play the poignant stuff just as well. Christian Clemenson lights up the screen every time he appears as Jerry Espenson the socially awkward lawyer with Asperger's Syndrome. The situations are kooky and there is continuous but brilliant commentary on modern day America and its short fallings, whilst maintaining a degree of patriotism.

There isn't another show like Boston Legal. Treasure it while it lasts.

Pink Dragon
5つ星のうち3.0 Party Political Broadcast for the Democrats, anyone?
2011年9月9日に英国でレビュー済み
Amazonで購入
I enjoyed the first couple of seasons of Boston Legal but, unfortunately, the success of the series seems to have gone to writer David E. Kelly's head and his political bias becomes increasingly tedious as the series goes on. Any Republican characters in the office, who were always made out to be buffoons (i.e. Brad Chase), simply disappear altogether while David E. Kelly's alter-ego, Alan Shore, becomes a one-man party political broadcast for the Democrats, using his time in court to pontificate about political issues at the expense of entertainment. I don't actually mind a bit of thought provoking debate and it makes sense to tackle difficult subjects, but this is becoming about as subtle and sophisticated as a sledgehammer around the back of the head. If you like having somebody else's political opinions shoved down your throat, then you will probably enjoy this series. If not, don't bother.
続きを読む
2人のお客様がこれが役に立ったと考えています
違反を報告
レビュー を日本語に翻訳する

J A Cook
5つ星のうち5.0 Denny crane- got to love him and Boston legal!
2016年1月22日に英国でレビュー済み
Amazonで購入
I absolutely love this American series, great story lines and a super bond between the characters makes for a fantastic show. Denny Crane and Alan Shore make the show for me, and I love how they share a moment on the balcony with a glass or two to reflect at the end of each episode. It is beautiful friendship and excellent acting.

Legal cases vary each episode, some being more serious than others, with some light hearted humour thrown in on the way.
Characters dealing with Asperger's syndrome and cross dressing legal secretaries- humour dealt with tactfully and in good taste.

I would recommend this show to anyone and season 3 is a great season.
続きを読む
違反を報告
レビュー を日本語に翻訳する

Happy Horsham
5つ星のうち5.0 We thoroughly enjoyed all the series of DVDs
2016年12月29日に英国でレビュー済み
Amazonで購入
This review covers all the DVD series. We loved the DVDs excellent acting and good structure to the stories. Characters grow on you throughout whilst being serious and amusing. James Spader and William Shatner are superb there were probably just a few that went off the boil a little with the story line in one of the later series but overall very enjoyable watch would recommend.
続きを読む
違反を報告
レビュー を日本語に翻訳する
すべてのレビューを参照します
トップへ戻る
Amazonについて
Amazonでビジネス
Amazonでのお支払い
ヘルプ＆ガイド
日本語ショッピングのための言語を選択します。 日本ショッピングのための国/地域を選択します。
© 1996-2020, Amazon.com, Inc. or its affiliates