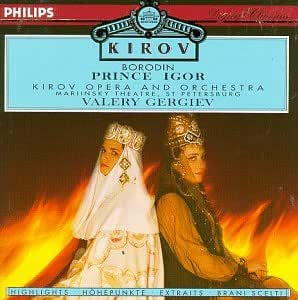 7. No.3 Dance Of The Polovtsian Maidens

UPDATED 30 July, 2018. At the behest of none other than Ralph Moore, GOAT Amazon reviewer and opera expert, I have been instructed to reconsider this review. That instruction was accompanied by a quote from Cromwell involving the bowels of Christ, and hence, should not be ignored. My response (lightly edited for the more sensitive members of the Amazon audience) is appended here and should be considered samokritika in the soviet sense.

The Kirov performance of Prince Igor is a dud. It was my first and only purchase in what I hoped would be a wonderful series from Philips. The singing is meh to execrable. One of the female voices don't ask me which) has that awful deep wobble pierced by occasional sharp shards of glass that only Russian mezzos can attain. Listening to the female lead soprano is like walking barefoot on a field of obsidian debitage--something I have actually done, and I don't advise it. The conducting is... meh. I won't waste my kopeks on anything else in this set.

Now we move away from fact into the realm of taste. Borodin is one of those composers I have flirted with over the years, always waking up the next morning with a headache and a desire to gnaw my arm off for a quick escape. My father, a physical chemist by training, thought that Borodin would be better influence on me than Mahler. I think think B should have stuck to his day job. My son, who loves all things Russian, gave me scores (meaning the written music, not multiples of 20) of Borodin's symphonies. I tried listening while studying and still don't like them. The only Borodin I fully embrace are the string quartets.

As for Prince Igor, it was finished by Rimsky-Korsakov, a sappy and maudlin Russian romantic of the worst sort. I attempt to enjoy Borodin from time to time, but whinging and gushing R-K? No. You might as well convince El Presidente that Theo Adam's Kindertotenlieder is the bomb.

A revised review: two stars if you are not sure about Borodin. Three if you like him a lot and can tolerate this performance. I am in the two star camp.

Presto Rubel
5つ星のうち4.0 From a Veteran Prince Igor Listener
2005年11月3日にアメリカ合衆国でレビュー済み
Amazonで購入
This version of Prince Igor has some fantastic perks, and some drawbacks. If you are new to this opera, buy the Tchakarov version (Sony, The Russian Opera) first. Then pick this up, and enjoy its advantages. If you are a veteran listener, buy this one.

The key problem with this version is with the singer who plays Igor. A strong, resonant basso is essential to Russian opera. In this case, Igor is virtually missing, his voice and interpretations are so weak. And yet, his character should be key to the opera. This Igor rushes the tempo and often doesn't take advantage of dramatic moments. He lacks resonance and depth. His projection is insufficient.

Galitsky's basso performance is variable. He does superbly in his duet with Yaroslavna. But later, he lacks depth and resonance, and doesn't take advantage of dramatic opportunities. Sometimes his voice is nasal.

Konchak's vibrato is too rapid, and clouds his voice. His low notes are weak.

Igor's son Vladimir has a fine voice, and uses it very expressively. I'd usually found this character to be bland, but not in this case.

Konchakovna's voice is occasionally so nasal that it is grating and painful to listen to, especially in her initial solo. Later, she improves, but her voice is too soft.

Yaroslavna is one of the crowning points of this recording. She has a truly lovely voice, and is very skilled and expressive. For veterans of this opera, her performance alone is worth buying this version.

But there are other reasons to buy it as well. The chorus is very strong, and has beautiful Slavic pronunciation. Excellent choirs are essential to Russian opera. The orchestra gives fresh, exuberant interpretations to the music, although occasionally at too fast a tempo. The recording quality is excellent.

I was very intrigued by the new sections of music included in this recording. Listen to them. What do you think?

The altered ending, which became a reiteration of the beginning, worked well for me. I was never happy with the original ending.

May I offer a request? Please, will someone make Ovlur's part into the gem that it is? I was raised on the Popovich version of Igor, by the Belgrade National Opera Orchestra. The director made Olvur's part into a piquant, deeply touching moment of light in the darkness of Igor's imprisonment under Konchak. Every conductor since then has rushed the part and ignored its possibilities.

Prince Igor is, quite honestly, my favorite piece of music. It introduced me to the rich, melodious, unique sounds of Russian music. It is more enticing than Boris Godunov, and is an excellent introduction to Russian opera.

Gerard Robert
5つ星のうち5.0 A rare russian recording
2011年2月21日にアメリカ合衆国でレビュー済み
Amazonで購入
Nicely directed by Valery Gergiev, that performing edition is completed by a very interesting booklet including lyrics in russian and in front english texts. Easy to follow and we are in the heart of action. I think it's necessary to listen that opera in original language. Borodin gives us a very joyfull present through a so romantic and powerful music. Very good choirs, a real "russian" orchestra, very good soloists. A reference version.
続きを読む
3人のお客様がこれが役に立ったと考えています
役に立った
フィードバックを送信中...
フィードバックをお寄せいただきありがとうございます。
申し訳ありませんが、お客様の投票の記録に失敗しました。もう一度試してください。
違反を報告
レビュー を日本語に翻訳する

Sally Stenger
5つ星のうち5.0 review of Prince Igor
2007年8月16日にアメリカ合衆国でレビュー済み
Amazonで購入
Prince Igor is an opera that is not only considered to be the greatest work of its composer, Borodin, but is also considered the greatest Russian opera. The conductor, Alexander Gergiev, is a very famous Russian also, and if you buy this disk you will see why. Great disk.
続きを読む
2人のお客様がこれが役に立ったと考えています
役に立った
フィードバックを送信中...
フィードバックをお寄せいただきありがとうございます。
申し訳ありませんが、お客様の投票の記録に失敗しました。もう一度試してください。
違反を報告
レビュー を日本語に翻訳する
その他の国際レビューを読み込む