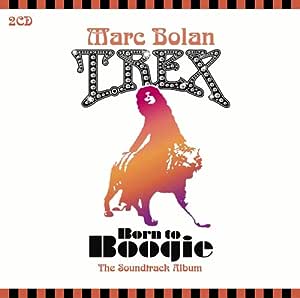 David Bowie's glammed-out Ziggy Stardust may have inspired much British critical hype at the dawn of the '70s, but it was Marc Bolan's T. Rex whose infectious blend of rock roots and mystic troubadour conceits were the era's biggest teen-frenzy pop phenomena. Ringo Starr was so enamored of "T. Rexstasy" that he set about making a loose documentary on Bolan and band, one whose loose flights of improvisational cinema seem as dizzy as they do substance-fueled. This double-disc soundtrack to Born to Boogie's painstakingly restored and expanded DVD release is a fascinating, warts-and-all slice of pop history, mixing concert performances of key hits like "Jeepster," "Get It On," and "Hot Love" with live-in-the-studio rave-ups of "Tutti Frutti" and "Children of the Revolution," featuring backing by Ringo and Elton John. The "Tea Party Medley" is one strange soirée of hits, while disc two presents the only complete recording of a T. Rex show, capturing the band's triumphant Wembley homecoming on March 18, 1972, in all its screaming teen glory. --Jerry McCulley

Experience one of the most legendary rock `n' roll bands as you've never seen or heard them before. Directed by and starring ex-Beatle, Ringo Starr, and featuring Elton John. Get ready to join Marc Bolan and T.Rex on stage in the epic, Born to Boogie The Motion Picture. Also included are the only two full T. Rex concerts ever recorded. Prepare to be blown away by a band at the height of their success performing to over 10,000 screaming fans. The studio sound is unmistakable on stage, the live experience is transforming. With a second disc packed full of extras, interviews and hours of never-before-seen footage, this is the ultimate DVD and soundtrack CD for any fan. Sanctuary. 2005.

M. H. Brown
5つ星のうち3.0 Soo Dissapointing!
2016年6月14日に英国でレビュー済み
Amazonで購入
This is such a disappointment, the blu-ray transfer is not significantly better than the earlier DVD release and worse, the audio remix is appalling! The vocal is too high in the mix, the crowd noise too low in the mix and the whole exhilaration of the 'live recording' has been lost. There is very little in the 'extras' that has not been available previously.

It's beautifully packaged and presented but offers little that isn't available already, after all the build up it really is soo dissapointing!

Johnny M
5つ星のうち5.0 A blast from the past that should be the future
2013年2月16日に英国でレビュー済み
Amazonで購入
I've waited years to see this movie, but I'm glad I hung on for the deluxe DVD edition; the wealth of extras make it the ultimate purchase, giving you not only a cleaned-up version of the original film, but both Wembley gigs that provided the backbone of the movie. The surreal interludes are along the lines of 'Magical Mystery Tour' and are short enough not to become too self-indulgent; the jams with Ringo and Elton are great because everyone seems to having fun, and the documentary as Rolan speaks to those involved in the genesis and restoration of the film (minus Ringo, alas - one would think he'd be happy to discuss something other than The Beatles) are fascinating.
But it's the live footage that makes this DVD worth every penny. Looking at the frenzied fifteen-year-old girls in the audience, I couldn't help but muse on the sad reality that their equivalents today would be attending a show by One Direction; and the contrast between those cynically-manufactured marionettes with a self-made superstar playing and singing his own songs, oozing charisma and presenting such an odd, quirky, but brilliantly effective twist on the standard rock formula, is a sobering one indeed. You're being sold short, kids of today. The Fab Four tore down Tin Pan Alley and Bolan was a beneficiary of that demolition; who'd have thought, forty years later, that we'd have retreated back to a time before rock 'n' roll first dented the cartel of Svengali's and hack songwriters who made the early 50s as dull as they've made the 2010s? Every time some old rock journo moans about the pre-punk 70s, remind them that they didn't know how bloody lucky they were!

Jimi Jac
5つ星のうち4.0 Smells like Teen Bolan
2015年9月8日に英国でレビュー済み
Amazonで購入
*This a is a review for the CD soundtrack of the film*

Consisting of two discs, the first featuring songs from the matinee show, a medley of hits with Bolan playing acoustic guitar accomplied by a string quartet, spliced with excerpts from the film.
The second disc (for me the reason for buying the album) is the entire evening performance.
A real rough & ready sound, perhaps the audio is lifted from the film tape reels, but it shows a different side to T Rex (there doesn’t seem any point in realising a live album if the songs sound exactly the same as the studio recordings).
Highlights form me are an extended version of “Get it on”, which is quite brave considering that the audience consists of mostly teenage girls, & a cover of “Summer time blues”, & because of the grungy sound doesn’t sound a million miles away from The Who’s version they performed on “Live ay Leeds”.
Only quibble is that at just over 50 minutes, the show is a little short, but it was at the height of Bolan’s pop phase of his career.

J. Berry
5つ星のうち5.0 About Time!
2006年3月9日に英国でレビュー済み
Amazonで購入
Apart from some well overdue recognition from the British Music Industry for his valuable contribution to popular music, I can't believe how long Marc Bolan fans have had to wait for some sort of worthwhile DVD release. Other than the occasional 'dodgy' fan club releases, official releases such as Born to Boogie and the MARC shows here, have only started to appear recently. However, it has been worth the wait. The beautifully restored 'Born to Boogie' was a real treat and hopefully should be enough to prove to the majority of 'musically intelligent' people how ahead of the game he was compared with the other 'cash-in' artists of the time. The MARC shows will not disappoint either. I am puzzled because Marc's career was far from decline as has been suggested. In fact it was well on the rise again after the fantastic 'Dandy in the Underworld' album, which was when this series first appeared on our screens. With a successful career under his belt Marc was, in fact, a highly respected artist by then and could have picked just about anyone to appear on this show with him. Instead he wisely decided to give some ‘then’ unknown bands a chance, such as Generation X and Boomtown Rats.
Fate, on the other hand, was not so kind and Marc died shortly before the final program was broadcast. The production is typical of pop shows of the time, but if you can see through that you will be witnessing some of the last great performances of this musical legend. For me it brings back some sad memories as well. I have seen some pretty good bands since the seventies but nothing comes near to stirring the musical senses like Marc Bolan and T.Rex did!
続きを読む
37人のお客様がこれが役に立ったと考えています
役に立った
フィードバックを送信中...
フィードバックをお寄せいただきありがとうございます。
申し訳ありませんが、お客様の投票の記録に失敗しました。もう一度試してください。
違反を報告
レビュー を日本語に翻訳する

P. Phillips
5つ星のうち4.0 Not bad on the whole.
2007年8月30日に英国でレビュー済み
Amazonで購入
I'd seen bits of this DVD over the years but it's nice to have them all in one place. The disc as whole is a bit uneven, there are some good tracks like Jeepster, Hot Love and I love to boogie but also tracks that are less good like Celebrate summer, Groove a little and London boys.
The picture quality is excellent on most tracks considering they're taken from 30-year old tapes while the sound quality is mostly acceptable.
Some of these clips were filmed literally days before Marc's death in September 1977 and so it's quite sad watching them, even more so given that he looked so well and everybody seemed to be enjoying the whole thing, him especially.
続きを読む
11人のお客様がこれが役に立ったと考えています
役に立った
フィードバックを送信中...
フィードバックをお寄せいただきありがとうございます。
申し訳ありませんが、お客様の投票の記録に失敗しました。もう一度試してください。
違反を報告
レビュー を日本語に翻訳する
その他の国際レビューを読み込む

Mellow Guru
5つ星のうち5.0 What a gem!
2010年6月11日に英国でレビュー済み
Amazonで購入
The bonus DVD of the concert footage is superb! I remember reading the music paper write ups at the time and wishing I'd been there. So to watch both the shows all these years later was the best.
'Born To Boogie', the DVD of the movie, is a must for all fans as it's fun, nonsense, embarrassing and wonderful, all rolled into one! I reckon it's also an accurate marker of the beginning of Bolan's decline. But that's another story.
A big HI! to all the 50 something guys like me who were proud to be counted at the time for being as in awe of him as the girls were. History has proved us right fellas!
続きを読む
7人のお客様がこれが役に立ったと考えています
役に立った
フィードバックを送信中...
フィードバックをお寄せいただきありがとうございます。
申し訳ありませんが、お客様の投票の記録に失敗しました。もう一度試してください。
違反を報告
レビュー を日本語に翻訳する

Martin Fairgrieve
5つ星のうち4.0 Marc
2011年8月29日に英国でレビュー済み
Amazonで購入
This is one of those - Revisiting childhood - DVD's. I was 11 when this was on so just getting to the singles buying age. I was glued to this show every week and loved the glam that Marc Bolan personnified. The DVD is a lovely time travel back to those innocent times. I loved seeing this all again in great quality - the previous copies I had were dodgy VHS's! Unfortunatly (probably due to copyright issues) the shows are not complete there are cuts - still the music and stuff that is there makes this a must have for Marc fans and 70's fans and actually almost anyone who likes music!
続きを読む
役に立った
フィードバックを送信中...
フィードバックをお寄せいただきありがとうございます。
申し訳ありませんが、お客様の投票の記録に失敗しました。もう一度試してください。
違反を報告
レビュー を日本語に翻訳する
その他の国際レビューを読み込む