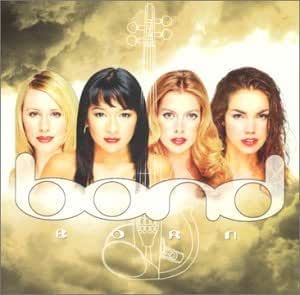 Born, the debut album by four conservatoire-trained young women has little to do with classical music. It's a gimmick, fusing a string quartet of frivolous femmes, spicy girls who all want to be "Posh", with dance beats, a big production mixing their violins, viola and cello with polished electronics. Add an enormous marketing budget and watch them top the charts. Taking themselves less than seriously--they played the James Bond theme at their Royal Albert Hall debut gig--pop "Victory" looks assured. This single bounces along with a dash of Rossini's Barber of Seville and a real sense of pop melodrama, in spirit little different from what guitarist John Williams did with his rather less photogenic band Sky in the late 1970s. What may surprise is that tracks such as the frenetic world-dance "Quixote" are penned by the film composer Magnus Fiennes, brother of the more famous Ralph and Joseph. "Winter" adds Jean Michel Jarre-style synth and voice-over to the ghost of Vivaldi and the infectious beat goes on, and on, and on. Sex sells, and Bond's success seems assured: this is a state-of-the-art product, but with Mike Batt of Wombles fame's bonus remix of "Victory" just don't expect it to be art. --Gary S Dalkin

rodboomboom
5つ星のうち3.0 Guess I'm Not into CrossOver Music
2001年8月2日にアメリカ合衆国でレビュー済み
Amazonで購入
I was intrigued to get this CD after hearing some of it on beethoven.com and Sir Stewart's recommendation of this.
I find myself disappointed with the majority of tracks on this CD, they all leave me back in the disco age with that same monotonous beat. The beginning held great promise for their version of 1812, but then the disco beat boomed out and left me uninspired until their ending, which wasn't bad but not great.
Did enjoy both cuts of "Victory" as well as "Horobushko" "Duel" "Bella Donna"
They certainly are attractive young accomplished musicians. I'm not really into this throbbing, pulsating sound though. Little is ok, but can't listen to this for very long.

Gary B. Robinson
5つ星のうち2.0 Cynical
2001年5月22日にアメリカ合衆国でレビュー済み
Amazonで購入
I've been listening to this for the first time and am not done, so take my review with a grain of salt. On the other hand, there are many people who would not listen to it all the way through. And if you're such a person, you're not going to get a like-minded review from someone who plays it over and over. So I think it's within my place to say something about it.

The tracks are produced, and many are written by Magnus Fiennes. It seems clear that he and/or someone else decided: "hey if we can find 4 very cute very young women who can play string instruments decently, and put a techno pop beat behind it, there will probably be a market!"

Most probably, they then put ads in the publications associated with various music schools, auditioned many musicians, and took the 4 most physically attractive who were also decent players.

The result is totally predictable. It doesn't bear any resemblance whatsoever to actual classical music, which usually involves interesting harmonic structurers, nuance, feeling, etc. For the most part, it can be summarized as being simply dance music that happens to have the instruments of a string quartet playing the lead parts.

Many people who like dance music will like this, as evidenced by most of the other reviews. It's probably very good dance music -- I'm not an expert in that and therefore can't really judge. I'm basing my low rating on the assumption that somebody reading my review all the way through is probably more interested in it as a potentially interesting classical-pop hybrid than as dance music. In that light, it does not fare well, IMO.

I'm sure that the people responsible for it will make money off it -- it's a sharp marketing ploy. But, to my tastes, it's little more than that.

I should note that this review does not mean to imply anything whatsoever about the four players themselves. They may be excellent classical musicians -- it's just that there's no way to discern that from the manufactured product that is this CD.

Nastassia Obazee
5つ星のうち4.0 Simply Stunning!
2005年6月2日にアメリカ合衆国でレビュー済み
Amazonで購入
I heard this album first, and I liked it. I'm "opening my horizons," so to speak, and this (among others) was the first albums I experienced. What a surprise!

As I listened to them, I ended up liking all of it, though my fave track is "Kismet". Following that was "Victory". The rest of the CD sounded like something I have heard before--from other sources.

Kent Hutchison
5つ星のうち4.0 WOW - A fresh sound to the classics.
2002年3月11日にアメリカ合衆国でレビュー済み
Amazonで購入
This CD is a great addition to any music library. These attractive young musicians (three are 24 yrs old and one is 26 yrs old)from England make the old classics sound like new pop. I purchased this CD after seeing their performance on ABC's "Good Morning America" television program. Now after listening to the CD, I'm awaiting this groups next American concert.
続きを読む
役に立った
フィードバックを送信中...
フィードバックをお寄せいただきありがとうございます。
申し訳ありませんが、お客様の投票の記録に失敗しました。もう一度試してください。
違反を報告
レビュー を日本語に翻訳する

Naomi B Greenberg
5つ星のうち5.0 CD to listen to over and over again!
2019年12月15日にアメリカ合衆国でレビュー済み
Amazonで購入
Buy this CD and any others you can find. Their arrangements and musicianship are fabulous. There is not one track I don’t love.
続きを読む
役に立った
フィードバックを送信中...
フィードバックをお寄せいただきありがとうございます。
申し訳ありませんが、お客様の投票の記録に失敗しました。もう一度試してください。
違反を報告
レビュー を日本語に翻訳する

AmazE
5つ星のうち5.0 Hooked on Bond
2012年9月8日にアメリカ合衆国でレビュー済み
Amazonで購入
I can't stop playing this CD! I love the strong rhythms and eclectic sounds of the music and musicians. Haven't decided if I like this album better than Shine, but it doesn't matter because I like them both. I will definitely listen to samples for other Bond albums and keep Born in my preferred (must listens) colection of CDs.
続きを読む
役に立った
フィードバックを送信中...
フィードバックをお寄せいただきありがとうございます。
申し訳ありませんが、お客様の投票の記録に失敗しました。もう一度試してください。
違反を報告
レビュー を日本語に翻訳する