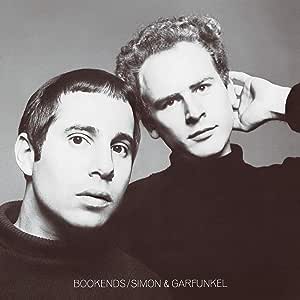 Mandrek Larl
5つ星のうち2.0 Two stars 'cos I'm with the honest monkeys and sceptical orangutans, not the insincere giraffes ...
2020年4月8日に英国でレビュー済み
Amazonで購入
Second daughter's Hungarian boyfriend was singing the "Sound of Silence" the other evening whilst washing-up, he only knew a couple of lines as he had never heard the original, only a meme (whatever that is), but that got me thinking that my Simon & Garfunkel collection was limited to BOTW and their GHs. So I popped a couple of CDs in my basket and, then imposing some form of hitherto unseen self-disciplined checked-out "Bookends" saving "Sound of Silence" for another week. So that's why I am sitting here listening to (and reviewing) "Bookends" for the first time 54 years after it was released.

Wiki tells me that this was S&G's fourth studio album and was a concept album of a life from childhood to old age with side one detailing successive stages bookended by the "Bookends Theme" [makes sense], while side two contains unused material from The Graduate soundtrack.

So tackling side one, the concept album. Words fail me. "America" of course is a great track but the rest of this psychedelic nonsense and studio experiments doesn't do anything for me. "Save the Life Of My Child" is ruined by the sound effects, the cacophonous orchestra break in "Old Friends" isn't needed; and as for the two minutes and seven seconds of audio verite collage that is "Voices of Old People", oh help, really, how stoned do you need to be to think this adds something? I can't see that I'll be playing this side again*.

Side two then is a pleasant release after side one. Centrepiece Mrs. Robinson is of course the best song Paul Simon ever wrote [that'll start pub arguments!] and the one everybody knows; "A Hazy Shade of Winter" is probably best known for the Bangles cover but whilst that was very similar to the original its poppyness lacked the edginess that S&G gave it; the other tracks "Fakin' It", "Punky's Dilemma" and "At the Zoo" are light and fun and very much the Simon & Garfunkel I remember from Radio 2 of my sixties childhood.

The bonus track "You Don't Know Where Your Interest Lies" carries on where side two left off and is a good addition, but another weaker version of "Old Friends" albeit without the orchestral cacophany isn't needed.

So how do I score this, side one is at best 2 stars, while side two is 4 stars which gives an average of 3 stars, but three stars for less than 20 minutes of album (and that includes the first bonus track) feels generous, so sorry two stars it is.

Perhaps I should have checked-out "Sound of Silence" instead!

Stephen Harris
5つ星のうち4.0 Bookends Journey
2018年12月1日に英国でレビュー済み
Amazonで購入
This is a very fine record from an era of excellent albums. It was recorded in 1968 and despite the then relative youth of the duo it concerns themes of loss and the passing of time. The classic 'America' is here as well as 'Mrs Robinson'. There are some odd inclusions such as the dialogue only 'Voices of Old People' although it does fit into the overall concept of the album. Nevertheless it is a consistent and impressive achievement. Other highlights include 'Save The Life Of My Child', 'Punky's Dilemma' and 'At The Zoo'.
続きを読む
1人のお客様がこれが役に立ったと考えています
違反を報告
レビュー を日本語に翻訳する

Doot Dee Doo
5つ星のうち5.0 For "America" alone, this is great. Their best album, I think.
2017年1月6日に英国でレビュー済み
Amazonで購入
I've known this album forever, I think it was their best by miles. The last "bonus" track is embarrassing but Paul Simon said that you have to do your s**t to get your good stuff. Maybe that's what he meant. Everything else is as it was and should be, no "up-dating", tinkering etc, absolutely right. Lyrics that mean something, honesty, introspection and outward-looking at the same incredible time - well, that's Paul Simon for you. Very gifted songwriter, we all know.
続きを読む
2人のお客様がこれが役に立ったと考えています
違反を報告
レビュー を日本語に翻訳する

Dag Kyndel
5つ星のうち5.0 Masterful music for everybody
2019年10月25日に英国でレビュー済み
Amazonで購入
This is a classic indeed! Around 1968 I bought it with my mother. It was a gift from her. I later sold the LP and I am now happy to buy the CD. Lovely music, indispensable in every record collection. Even for you who usually only listen to classical music.
続きを読む
違反を報告
レビュー を日本語に翻訳する