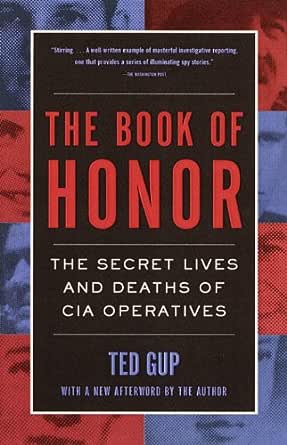 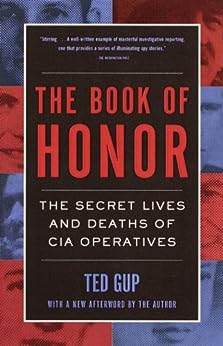 The Book of Honor: The Secret Lives and Deaths of CIA Operatives (English Edition) Kindle版

Inscribed on a wall at Central Intelligence Agency headquarters in Langley, Virginia, is a quote from the Bible: "And ye shall know the truth, and the truth shall make you free" (John 8:32). On the other side of the lobby, five rows of stars are etched into the white marble wall, each representing a CIA officer killed in the line of duty. Below the stars is a case containing the "Book of Honor"--"a tome as sacred to the Agency as if it held a splinter of the true cross," writes Ted Gup--and in it are the names of the men and women who gave their lives serving the CIA. Well, not all the names; about half the entries are blank because the CIA says it doesn't want to compromise ongoing operations. Yet, as Gup argues in his own tome, also called The Book of Honor, the truth behind many of the stories that aren't being told threatens nothing--except perhaps the agency's own sense of shame over botched operations.

Gup, a well-known investigative reporter with experience at The Washington Post and Time, interviewed hundreds of current and former CIA case officers to tell the stories behind the stars. "In the aggregate, the stories of the stars form a kind of constellation that, once connected, reveal not only the CIA's history but something of its soul as well," he writes. Yet this is, thankfully, not an indiscrete book. He writes of "a young woman who died a violent and selfless death in 1996 ... her name is withheld from this book. The Agency made a compelling case that to identify her would put others at risk." The bulk of The Book of Honor does, in fact, name names and describe how they died. In this sense, it is similar to the runaway bestseller Blind Man's Bluff, which described the secret history of American submarine espionage during the cold war. Yet what's most striking about Gup's accounts is how many of the deaths were routine or accidental. Many agents merely had the misfortune of being on planes that crashed--hardly the stuff of a James Bond adventure. Throughout, Gup is sensitive to a situation in which, "between the values of an open society and the demands of a craft rooted in deception and betrayal, the CIA is asked to steer an uneasy, often irreconcilable course." This fascinating book strikes a clean blow for the open society--but it serves a larger purpose as well: telling the truth. --John J. Miller
--このテキストは、kindle_edition版に関連付けられています。

From the Back Cover

A former investigative journalist with the Washington Post and Time and winner of a George Polk Award, Gup breaks a longstanding taboo in an expos that reveals the namesDand personal storiesDof some three dozen CIA agents who died in the line of duty and whose identities have been kept secretDsometimes for decades. Gup interviewed more than 400 current and former CIA agents, as well as surviving family members, to pry loose their stories. Among the spies unmasked in these kinetic biographical profiles are Douglas Mackiernan, U.S. vice-consul in China's westernmost Xinjiang province, who fled Mao's revolution only to be shot to death by Tibetan border guards; Pete Ray, an Alabama National Guard pilot killed in the Bay of Pigs invasion; Matthew Gannon, victim of the Pan Am Flight 103 crash over Scotland, a bombing linked to Libyan terrorists; and Hugh Redmond, who refused to crack during 19 torturous years in a Shanghai prison. Gup unveils covert missions from Laos to France, from Angola to Cyprus, providing extraordinary insight into the CIA's day-to-day operations. He also empathetically delves into the ordeals of these fallen spies' grieving families, many of whom were lied to for years as the agency refused to acknowledge the men's CIA ties. Told against the backdrop of Cold War and superpower struggles, Gup's sleuthing is a remarkable coup, full of high-level intrigue, cover-ups and drama. He leaves it to readers to decide whether his subjects are heroes or knaves, and whether the CIA is a rogue agency that should be reined in or an essential survival tool in a treacherous world. (May) FYI: Gup's 1992 expos in the Washington Post of a top-secret government installation buried beneath a West Virginia resort, where Congress would seek shelter in the event of impending nuclear war, led to that underground complex being shut down.
Copyright 2000 Reed Business Information, Inc. --このテキストは、kindle_edition版に関連付けられています。

This is a story of heroes and secrets.

In the entrance of the CIA headquarters looms a huge marble wall into which seventy-one stars are carved--each representing an agent who has died in the line of duty. At the base of this wall lies "The Book of Honor," in which the names of these agents are inscribed--or at least thirty-five of them. Beside the dates of the other thirty-six, there are no names. The identity of these "nameless stars" has been one of the CIA's most closely guarded secrets for the fifty-three years of the agency's existence. Even family members are told little--in some cases, the agency has denied the fact that the deceased were covert operatives at all.

But what the CIA keeps secret in the name of national security is often merely an effort to hide that which would embarrass the agency itself--even at the cost of denying peace of mind for the families and honor due the "nameless stars."

In an extraordinary job of investigative reporting, Ted Gup has uncovered the identities, and the remarkable stories, of the men and women who died anonymously in the service of their country. In researching The Book of Honor, Gup interviewed over four hundred current and former covert CIA officers, immersed himself in archival records, death certificates, casualty lists from terrorist attacks, State Department and Defense Department personnel lists, cemetery records, obituaries, and tens of thousands of pages of personal letters and diaries.

In telling the agents' stories, Gup shows them to be astonishingly complex, vibrant, and heroic individuals--nothing like the suave superspies of popular fiction or the amoral cynics of conspiracy buffs. The accounts of their lives--and deaths--are powerful and deeply moving, and in bringing them at long last to light, Gup manages to render an unprecedented history of covert operations at the CIA.

Ted Gup is a legendary investigative reporter who worked under Bob Woodward at the Washington Post, and later at Time. He is the recipient of numerous awards, including the George Polk Award and the Worth Bingham Prize. Gup is a professor of journalism at Case Western Reserve University. He lives in Pepper Pike, Ohio. --このテキストは、絶版本またはこのタイトルには設定されていない版型に関連付けられています。
続きを読む

Mrs S
5つ星のうち5.0 This is real life
2014年12月14日に英国でレビュー済み
Amazonで購入
My uncle is one of the CIA agents in this book, it really makes you appreciate what these men went through, and how they got left high and dry. Very moving and for our family very moving.
続きを読む
2人のお客様がこれが役に立ったと考えています
違反を報告
レビュー を日本語に翻訳する