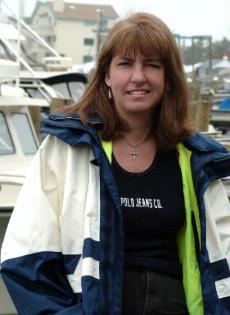 CAROL PLUM-UCCI is the author of numerous novels for teens, including What Happened to Lani Garver and Streams of Babel. She lives in southern New Jersey.

Old Man C
5つ星のうち3.0 Not For All Young Readers
2017年7月14日にアメリカ合衆国でレビュー済み
Amazonで購入
My 12 year old son had a summer assignment which necessitated his reading a Printz listed novel. This fit the bill and the blurb here made it sound like an interesting read, but also mentioned its being for "12 and older," so this was the book we chose. My review is specifically in regard to the age recommendation. In his first sitting, my son found themes and language which he found troubling. After scanning chapter one, I agreed and we found him another book.

I know some 12 year olds may as well be 30. I even knew a few kids like that when I was 12 (a looong time ago), but, contrary to popular culture, not every 12 year old is like that. My son has a cleaner, kinder, more respectful vocabulary than I ever had as a kid. He isn't interested in, nor does he want to read about sexuality at all, let alone issues of adolescent homosexuality. I take no issue with these themes being presented, but I would have appreciated knowing the level of "maturity" represented in this book, which would have allowed me to make a more informed decision when choosing what to buy. If your child still appreciates Battle Cats over Call of Duty and only refers to certain words by their first initial, this book may be a little to "mature" for them.

Just this Girl
5つ星のうち5.0 Beautiful
2017年9月12日にアメリカ合衆国でレビュー済み
Amazonで購入
This books is absolutely wonderful every time I read it. I've read this book & what happened to Lani Garver at least once a year, every year for the past 10 years, and it still manages to entrance me and keep me clinging to every word until the final page. Carol Plum-Ucci's coming of age books are beautiful and relatable. If you enjoyed this book, I highly recommend "What Happened to Lani Garver" & "The She"!

I hope you all love her writing as much as I do!

Karen Keyte
5つ星のうち5.0 When The Lie Becomes More Important Than The Truth
2011年8月11日にアメリカ合衆国でレビュー済み
Amazonで購入
"This was the most dangerous kind of lying, it struck me, the kind that was happening to me now - where people need the lie so badly they become convinced the lie is true. It's dangerous because they can tell the lie with so much belief that it sounds like the truth, and they can make other people believe it." - Torey Adams

Two years ago, before all of this began, Torey Adams was a different person, one of Steepleton High's elite. On the football team, in a band, dating the most beautiful girl in school - Torey was the perfect son of perfect parents living a perfect life in a perfect town. Tthat changed when Chris Creed disappeared. It's not like Torey and Chirs were friends, really. Chris didn't have any friends. He had been the class freak for as long as anyone could remember. He was just that kind of kid, weird and irritating and totally without social skills. Still, as Torey put it, "...when a kid sits behind you every day since kindergarten, sits across from you in Sunday school, belongs to your pool, annoys you in Cub Scouts, and throws a thousand balls over your head in Little League, you don't have to like him in order to love him."

When Chris disappears, leaving behind only an ambiguous note that could signify either his suicide or running away, people in town - and particularly the kids who have known him all his life - are not terribly concerned. Unlike his popular friends, Torey doesn't see the humor in imagining Chris as a suicide and wondering how he did it and where his body will turn up. He's more concerned with the fact that none of them, not one person who had been going to school with Chris since kindergarten, noticed that he was troubled enough to run away or commit suicide. He accepts, when no one else will, that he and all of his classmates played a part in whatever it was that Chris decided to do. When ridiculous - and dangerous - rumors begin to swirl and everyone in town seems determined to point his or her finger at someone else, Torey becomes determined to uncover the truth.

The Body of Christopher Creed is one of the very best examples of a psychological mystery/thriller that it has ever been my pleasure to read. As Torey's interest in Creed's disappearance spirals into obsession, he sees clearly how difficult it is for most people to take responsibility for their own actions in the wake of an event such as this. That difficulty leads many to bend the truth to fit their perceptions rather than to view the world as it really is and not as they would prefer it to be. The Body of Christopher Creed is one of those novels that hooks you from the beginning and then reels you in steadily as the tension ratchets ever tighter. This is a cleverly plotted, wonderfully written mystery that is sure to keep you guessing until the end.

Kayla Kuni
5つ星のうち3.0 Not sure if I liked it or not
2014年5月9日にアメリカ合衆国でレビュー済み
Amazonで購入
As much as I enjoyed parts of this book, some of the diction really became distracting. The use of the phrase "turbo slut" was really overdone, so much so that it was annoying to keep reading. I wish the author could have been more creative with the insults or terminology.

I felt that the Creed family was not as featured as they could have been. I was happy to see a part at the end of the book address them a bit. This book had a great plot, but there were parts that were developed and went no where. The police chief had so much potential as did the brothers of CC, but we saw so little of them.

The plot was cool and I really liked the setting of the story. I liked the psychological aspects of the story, but after reading it I did not feel a huge connection to the characters, nor did I find myself caring too much about what happened to them. I am sure, like other avid readers, it is not uncommon to have thoughts about what happened to characters after the last page or have some desire to see a sequel. For this book, I just found myself happy to be done with it.
続きを読む
役に立った
フィードバックを送信中...
フィードバックをお寄せいただきありがとうございます。
申し訳ありませんが、お客様の投票の記録に失敗しました。もう一度試してください。
違反を報告
レビュー を日本語に翻訳する

Jenababy13
5つ星のうち5.0 Amazing book.
2014年2月3日にアメリカ合衆国でレビュー済み
Amazonで購入
I absolutely loved this book and everything about it! I had to read it for a college class and it easily became an instant favorite in that class. The book makes you think and it does it in a thrilling way which I absolutely love.

The story centers around Torey and after receiving a letter his fascination with Christopher Creed, a fellow student who has disappeared. All of the students have no idea if he simply ran away or committed suicide. This book does a fantastic job of looking a human nature and how we as people treat other people. How you should never be mean to someone because you honestly never know what they're through.

Overall this book was amazing. It makes your heart hurt to see how mean children can actually be. How horrible it is that we don't care until something terrible happens. I loved this book because it's thrilling and deals with a very real topic. It even has a little hint of supernatural in it. Overall fantastic book!
続きを読む
役に立った
フィードバックを送信中...
フィードバックをお寄せいただきありがとうございます。
申し訳ありませんが、お客様の投票の記録に失敗しました。もう一度試してください。
違反を報告
レビュー を日本語に翻訳する

Mama Long
5つ星のうち5.0 Suspenseful, Intriguing, Shocking, yet, TOTALLY HUMAN
2010年8月11日にアメリカ合衆国でレビュー済み
Amazonで購入
I just completed The Body of Christopher Creed, a six hour read for me, dedicating half of the read to late last night into early morning and then completing it this morning after 5 hours of sleep. I honestly couldn't think of doing anything else today until I finished the novel (I love the "quick-sand books", which you grab you from the start and leave you sinking). As soon as I finished the book, I insisted my 15 year old read it next. We are, to say the least, book lovers. This story is in your face and full of profanity, which I am not convinced was totally necessary. But, aside from that, I find no other fault and can even forgive the author for throwing the f-word around like it was candy.

A word of caution, this is not a book for the young. I recommend it for 15+ and, although it is given a 6.1 grade level equivalent (it is indeed an easy read), it is also rated as "young adult" and believe that rating should be taken seriosuly.

This novel is amazing for a first-time author. I wish I had read it sooner. Now, because I have found a new author to love, I'll move on to another of Plum-Ucci's books, What Happened to Lani Garver.
続きを読む
1人のお客様がこれが役に立ったと考えています
役に立った
フィードバックを送信中...
フィードバックをお寄せいただきありがとうございます。
申し訳ありませんが、お客様の投票の記録に失敗しました。もう一度試してください。
違反を報告
レビュー を日本語に翻訳する

TheDrunch
5つ星のうち5.0 Struck a nerve
2012年8月12日にアメリカ合衆国でレビュー済み
Amazonで購入
Fantastic, excellent, breathtaking...I'd add more superlatives, but I'll stop to tell you to READ THIS BOOK. Plum-Ucci perfectly captures her teenage characters -- particularly the outcast, scorned Christopher Creed. I could go on and on, but believe me when I say the end of this book took my breath away.
続きを読む
役に立った
フィードバックを送信中...
フィードバックをお寄せいただきありがとうございます。
申し訳ありませんが、お客様の投票の記録に失敗しました。もう一度試してください。
違反を報告
レビュー を日本語に翻訳する
その他の国際レビューを読み込む

B. Prestin
5つ星のうち5.0 Loved it dispite son thinking it was "twisted"!!
2014年7月26日にアメリカ合衆国でレビュー済み
Amazonで購入
Well, I got this book b/c my son was reading it for 9th grade English. He said it was twisted and I wanted to see... It was a little twisted. But it was awesome too. I mean, it really kept you reading. There are many subtle innuendos and weird twists but that's what keeps you coming back to finish the book.
続きを読む
役に立った
フィードバックを送信中...
フィードバックをお寄せいただきありがとうございます。
申し訳ありませんが、お客様の投票の記録に失敗しました。もう一度試してください。
違反を報告
レビュー を日本語に翻訳する

Brian Del Rossi
5つ星のうち5.0 Damn good
2016年4月12日にアメリカ合衆国でレビュー済み
Amazonで購入
Just an absolute great piece of literature. Recommend to anyone. I've read it twice and the sequel once. While the sequel was good it will obviously never live up too the original. Thank you Ms. Plum-Ucci for this book. I hold fewer books in higher regard.
続きを読む
役に立った
フィードバックを送信中...
フィードバックをお寄せいただきありがとうございます。
申し訳ありませんが、お客様の投票の記録に失敗しました。もう一度試してください。
違反を報告
レビュー を日本語に翻訳する