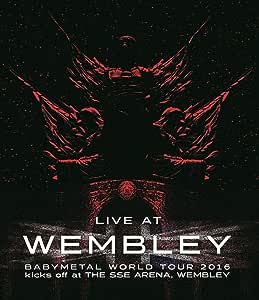 I was really impressed that Yamato Nadeshiko danced to the end.
This is good or bad for many reviews,
After all, you will have to watch all the live video. .
I personally like the Tokyo Dome Edition.
続きを読む
役に立った
コメント 違反を報告
日本からのレビューをすべて見る

Mr. R. E. Smith
5つ星のうち5.0 Amazing Concert
2017年6月4日に英国でレビュー済み
Amazonで購入
I never thought I'd see the day I'd use the words "Cute" and "Metal" in same sentence, but no other words really sum Babymetal up for me. They've taken three of the cutest Japanese girls I've ever seen in my life, and placed them in a band playing some of the heaviest Metal I've heard in a long time - and somehow made made it work.

Su-Metal has an amazingly powerful voice for one so young, and easily holds her own against the Metal blasting in the background. Yuimetal and Moametal remind me of those battery adverts with the rabbits, they just go on and on and on with their dancing and singing, I know they're even younger than Su, but I wonder where they keep the batteries to last so long - it's amazing to me!

The guys playing the music are also awesome, and the solo's they do are also incredible, I wish more Western bands made time for solo's like that. The concert on this DVD is full of energy and enthusiasm from the girls and the band, which is something I like to see, whether I go to watch a show or buy a DVD... I think some bands could learn from the theatre of Babymetal.

I can understand why this band gets the hype now. Well worth buying if you can find it, but try Live At Bukoden and/or Live In London first, they're easier to find in the UK, and just as good. Definitely all are worth *****.
続きを読む
役に立った
フィードバックを送信中...
フィードバックをお寄せいただきありがとうございます。
申し訳ありませんが、お客様の投票の記録に失敗しました。もう一度試してください。
違反を報告
レビュー を日本語に翻訳する

John DeGroof
5つ星のうち3.0 BEWARE OF VIDEO ISSUE
2017年3月16日にアメリカ合衆国でレビュー済み
Amazonで購入
I work in the professional video industry as a media engineer, and have difficulty watching this. You'll notice a video "stutter" several times per second, especially noticeable during horizontal pans, but visible any time there is motion on the screen. I believe I know why this happened, and am attempting to reach out to their technical team in the hopes they'll fix it and re-issue it.

This disc is 23.98 frames/second, like most movies on Blu-ray. Concerts are often shot at 30 frames/second to sync cameras with strobe lights, etc. I believe this concert was shot at 30p, but for some reason it was converted to 23.98p. The method they used was extremely unprofessional and sloppy - they simply dropped every 5th frame. This is the cause of the stutter. If you still-step through the video, you'll see this pattern:

It's sad to see this happen, especially considering that it was totally unnecessary. 30p is a perfectly valid Blu-ray framerate. There was no need to do anything, yet for some reason, they did. If you can't see this issue, or it doesn't bother you, by all means buy this title and enjoy it. I will likely rip it and do some fancy tricks to re-generate the missing frame through interpolation, and burn a "fixed" disc. While not perfect, it will be 90% better than it is now.

I would have liked to give this review less stars, but the band and performance deserved at least 3 stars. It's unfortunate the band is being treated as a cheap production with this title - they deserve better.
続きを読む
23人のお客様がこれが役に立ったと考えています
役に立った
フィードバックを送信中...
フィードバックをお寄せいただきありがとうございます。
申し訳ありませんが、お客様の投票の記録に失敗しました。もう一度試してください。
違反を報告
レビュー を日本語に翻訳する
その他の国際レビューを読み込む

DON666
5つ星のうち4.0 Absolutely fantastic
2018年11月20日にアメリカ合衆国でレビュー済み
Amazonで購入
I had already seen parts of this concert on the Internet, so the Blu-ray was a must-have for me. Whoever wants to see the "old" BABYMETAL on top of their career needs to get this disc. Picture and sound quality are great, although the sound is only in stereo. To me, this is no problem at all, because usually I use my headphones anyway. For people without over-sensitive neighbors who own a good 5.1 system, this might be sub-optimal, but that's the same with all the other BM releases, only the producers know why... But still, it gets my full recommendation. If you like BABYMETAL, you'll love this Blu-ray.

Sorry for my rusted English, I'm writing from Germany, because the price on Amazon.com was far better than the one on Amazon.de, so I ordered in the U.S.
続きを読む
1人のお客様がこれが役に立ったと考えています
役に立った
フィードバックを送信中...
フィードバックをお寄せいただきありがとうございます。
申し訳ありませんが、お客様の投票の記録に失敗しました。もう一度試してください。
違反を報告
レビュー を日本語に翻訳する

RandomGamerGirl
5つ星のうち5.0 Excellent production values and performance.
2017年1月25日にアメリカ合衆国でレビュー済み
Amazonで購入
This is a concert worth owning. The video quality is actually slightly more crisp than their other blu-ray releases, which is impressive considering their other releases are very crisp, detailed, and have very little video noise or artifacts. For the best experience try watching this on a 65 (or bigger) inch 4k OLED and a 300w or better sound system, it's mind blowing. The OLED makes the picture pop with its perfect blacks and vibrant colors, not to mention the upscaling creates the illusion of extra detail, you can see the sweat and even small imperfections on Su's, Moa's, and Yui's face.
続きを読む
4人のお客様がこれが役に立ったと考えています
役に立った
フィードバックを送信中...
フィードバックをお寄せいただきありがとうございます。
申し訳ありませんが、お客様の投票の記録に失敗しました。もう一度試してください。
違反を報告
レビュー を日本語に翻訳する