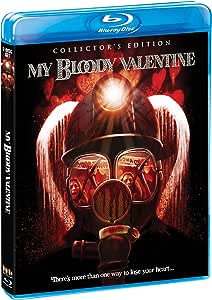 RK
5つ星のうち1.0 CENSORED VERSION, COMPLETE WASTE OF TIME
2019年6月20日 - (Amazon.com)
Amazonで購入
This film was horribly cut to the pieces my the MPAA back in '81 and now in 2019 Amazon chooses to upload that same censored garbage on to Prime Video??? Please Amazon, do everyone a favor and upload the true, uncut version
続きを読む
21人のお客様がこれが役に立ったと考えています
レビュー を日本語に翻訳する

Killer Kitty 79
5つ星のうち5.0 Roses Are Red, Vionlets Are Blue, One Person Is Dead And So Are You
2018年8月5日 - (Amazon.com)
Amazonで購入
I'm glad I was able to enjoy this classic 80s slasher film that isn't the edited version. If you want to check out My Bloody Valentine make sure you get the Special Edition with the red tinted cover as it has all the death scenes.

The plot is very simple a town that's haunted from a mining accident that left one of the miners to go insane and kill anyone who hosted valentine's party. 20 years later the town of Valentine's Bluff is having it's first valentine's party while everyone is looking forward to it however TJ who returned to the town isn't having the best of times. His girlfriend is now going out with a friend Axel as the two are butting heads with each other as they both want Sarah.

When the sheriff gets a package of a heart along with a warning not to host the a valentine's party he and the mayor call it off after another person is killed. TJ's friends annoyed and believing the whole curse isn't true plan to host their own party at the mining station. Everything is going fine till the killer shows up and one by one begins picking them off with some of friends trapped in the mines.

I really enjoyed this movie and loved the plot twist at the end. Like I said before if you want to watch a good fun slasher like My Bloody Valentine make sure you get the Special Edition as you won't be disappointed.
続きを読む
10人のお客様がこれが役に立ったと考えています
レビュー を日本語に翻訳する

Blane R. Schippers
5つ星のうち5.0 Slasher with adults
2019年1月29日 - (Amazon.com)
Amazonで購入
My Bloody Valentine (the original, not the remake), is fantastic. Very entertaining. I love that this is a slasher with adults. It's different. Also no gratuitous nudity which is rare for an 80's slasher. If you purchase this movie though be aware that the special edition is the only version that is unedited. The original version I purchased had all the death scenes cut to bits. The special edition has the original scenes in tact. It's much better with these scenes in place. I love this movie. If you like slashers I highly recommend this one. It's a cut above the rest.
続きを読む
6人のお客様がこれが役に立ったと考えています
レビュー を日本語に翻訳する

Ben30
5つ星のうち4.0 A SLASHER FILM THAT INSULTS VALENTINES DAY, VERY FUNNY
2014年4月11日 - (Amazon.com)
Amazonで購入
Valentines Day is overrated in my opinion
so why not have a 80's slasher/Horror film that makes fun of Valentines Day, which i find funny
this film was released in Cinemas 1981 the same year many other slasher films were released
Halloween II, friday the 13th part II, The Prowler, Final exam and others
not my favourite slasher/Horror film that's for sure probably down the bottom of the list, plot related anyway

the plot is basically a Gold digger Miner comes back for revenge on Valentines Day
cause of a Tragedy that happened to him 20 years ago on Valentines Day
the film is set in a Mining town in Canada somewhere
and this Miner goes on a Killing spree in this Town, the plot and the Acting is very average that's for sure
but the Killing scenes are extremely Graphic nearly equivelant to a Blood and Gore film these days
so this film was heavily cut by the MPAA back in 1980
to the point where the killing scenes very lame and pathetic
there is some suspense in this film but mainly just kill scenes

i bought this new Lionsgate blu-ray of this 1981 slasher film out of curiosity actually
not because i was a massive fan of the film
Halloween II, Friday the 13th 2 were better films released the same year
but because Lionsgate have released both the Theatrical version and the Extended cut version on 1 Disc
i watched the Extended cut version which i think is a better version
this extended cut is just the Deleted scenes included back in the Theatrical version
which you can watch seperatly anyway
the Deleted footage is just the extra Blood and Gore that's it which looks very Graphic i think
the film itself is a new High definition remaster which does look amazing very clear picture better than the dvd version
but the extra blood and Gore footage looks only Digital remastered not HD
you can definitely tell the difference in picture quality when the kill scenes come up on screen
apart from that the Extended cut is what it is. so just be thankful that Paramount released
the extra blood and Gore and you can watch it as part of the Theatrical version
which is the Extended cut option on the menu

Lionsgate has also released some new extras aswell for this special edition of the film
Bloodlust my Bloody valentine is a making of featurette only goes for 20mins
the first 10-15mins is about the making of the 1981 version
all new interviews with Producer John Dunning, Andre Link, the Make up effects supervisor is interviewed too
and some Actors from the 1981 release are also interviewed aswell
the Actors don't say much about the film that's for sure cause to them the film was just another Job
to get some cash on the side that's it, hence the average acting performances in the film
some of them didn't continue to do anymore acting roles
some of them just went to get University Degrees and schlarships so the film was just some cash money on the side
the last 5mins of this featurette is about the 2009 remake
but this featurette is still interesting to watch even for Non fans of the film

the Audio quality is excellent 5.1 master audio, the picture quality is amazing HD
if this film is one of your favourite slasher films from the 80'S
then get this new Blu-ray release by Lionsgate, scrap the old dvd release get this new blu-ray version
definitely worth the cash
the plot is very very average, the kill scenes are excellent thou
this blu-ray release is amazing because of the new extended cut
i don't love the film it's not my favourite slasher film so i just gave it 4 stars not 5.
続きを読む
3人のお客様がこれが役に立ったと考えています
レビュー を日本語に翻訳する

GSD
5つ星のうち5.0 One of the best slasher flicks ever made
2013年1月13日 - (Amazon.com)
Amazonで購入
My Bloody Valentine is one of those holiday clones that was released in the wake of the success of the greatest horror film of all time, Halloween. While I love horror films in general most slasher films follownig Halloween and in the early 80's were forgettable. This not only is one of the best slasher films ever made, but is also a great all around horror movie.

The setting is a bleak, blue-collar mining town. The characters are working class twenty-somethings. The plot involves a mining accident that entombed and killed all but one of a handful of miners. That survivor, Harry Warden (one of the best horror movie villains of all time), had to resort to cannibalism until he was rescued. This sent him off the deep end and the next year, on Valentine's Day, he returned to town (in full miner's garb with pick-axe) and brutally murdered the two supervisors who caused the mining accident. He then cut their hearts out and sent it to the dance with a warning never to have another Valentine's dance. Twenty years later, the townspeople are preparing the first dance in twenty years. Naturally, a series of murders begin, with the victim's hearts cut out. Alarmed, the police decide to cancel the dance. Undeterred, the young characters decide to have a secret party (at the mine's cafeteria). And that's when the slashing fun begins. The twist at the end reveals the killer isn't who you think it might be.