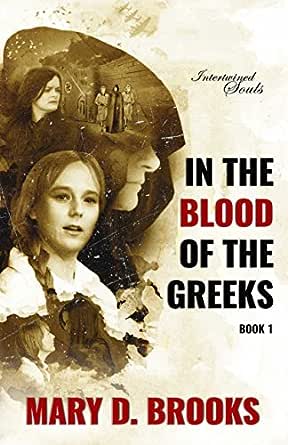 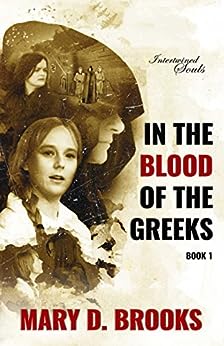 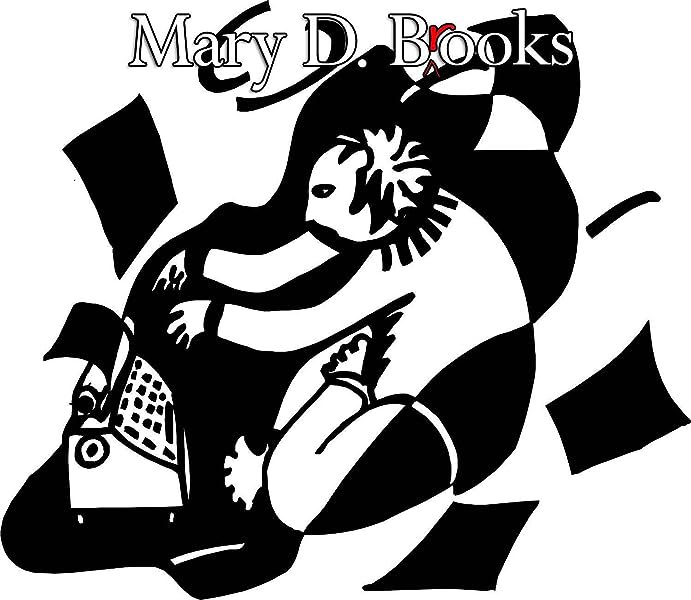 In The Blood Of The Greeks (Intertwined Souls Series: Eva and Zoe Book 1) (English Edition) Kindle版 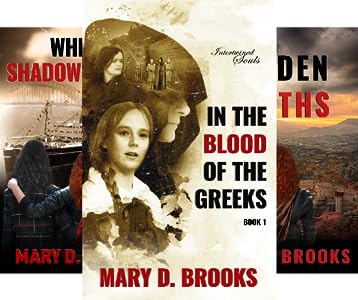 Forbidden love, heart racing suspense, an epic tale set in war-ravaged Greece.
Two women -- one a German officer's daughter, the other a young Greek woman filled with fury -- race against time to help Jews escape a Greek town during World War II. They are moments from death if their clandestine operation is exposed.

Eva and Zoe should be enemies but fate brings them together to work as a team to accomplish their life saving mission. They find themselves in an unlikely friendship that transcends the barriers between them and while they work to help Jews escape, their unlikely friendship turns to love. Zoe Lambros' faith in God is shattered after her mother's death at the hands of the German Commander. She determines to defy the enemy in every way she can--including a festering urge to kill the German Commander's daughter, Eva Muller.

Eva Muller has a tortured past, and a secret, if revealed, will lead to certain death at the hands of her father. Despite knowing the risk, Eva is working with the village priest to help the Jews escape. With her activities closely observed, Eva needs help to continue the clandestine operation and Zoe Lambros is the answer despite her antagonism to the fiery Greek.

Mary lives in Australia and has been writing since she was eight when she rewrote her favourite tv shows when stories didn't quite end up the way she wanted. Sometimes in a world of her own, she relished the quiet to invent new stories and worlds. Mary has written non-fiction articles for Australian and US magazines but her first love is fiction. When she's not writing, she's designing sites, creating art or being chief editor/owner of AUSXIP.com You can find Mary's author site at http: //www.nextchapter.net or her fiction series site at http: //intertwinedsouls.nextchapter.n

Max Knight
5つ星のうち4.0 Romance set against the backdrop of WWII and the German occupation of Greece
2019年3月18日 - (Amazon.com)
Amazonで購入
Author Mary D. Brooks’ novel looks into the “katochi,” the occupation of Greece by the Nazis during World War II. It pays homage to the Greek Resistance movement as well as the efforts of local priests and citizens to save Greek Jews from the horrors of Hitler’s final solution, and it tells the story of two women, one Greek, one German, who not only survived the war, but found both love and hope in the process.

Zoe Lambros is fourteen, headstrong, outspoken, and openly defiant towards the Germans who have occupied Larissa, Greece. Eva Muller is eighteen, the daughter of the German commander whose troops now enslave the local Greek population, and reviled by Zoe. Crippled in a bombing of her home while her father was stationed in Paris, she is recovering not only from physical wounds, but emotional scars suffered during aversion therapy. Eva’s attraction to other women has been brutally repressed by shock treatment and chemical injections.

Unbeknownst to Zoe, Eva is secretly working with the Greek Resistance through the local priest, Father Haralambros, providing forged travel documents to Jewish families so they can escape imprisonment and almost certain death in Nazi concentration camps. Their relationship also goes well beyond priest and collaborator, but Zoe is unaware of their secret connection.

When the Resistance’s activities against their German oppressors result in the deaths of German soldiers, the attacks are met with swift and brutal retribution. Major Hans Muller not only orders the execution of captured Greek fighters but local villagers. Cruel and sadistic, he takes pleasure in personally selecting and shooting the victims. When he kills Zoe’s beloved mother, she swears revenge.

Zoe’s plans focus on killing Eva Muller whom she mistakenly believes laughed while Zoe held her dying mother in her arms. She doesn’t care whether she dies in the attempt as long as Eva dies along with her. She struggles with her faith knowing that suicide and murder are wrong. She denies God’s existence and questions how He could possibly allow the German occupation of her country and the atrocities committed against her family and her people.

Divine intervention intercedes when Father Haralambros arranges for Zoe to actually work in the Muller household as a caretaker to Eva. At first she can’t believe the irony, but her hatred will eventually transform as she discovers who Eva really is, the physical and psychological trauma she has also endured at the hands of the Nazis, the courage it takes for her to defy them, her true relationship with Father Haralambros, and the emerging affection they both feel toward one another!

The title of the book comes from the Greek national anthem: And we saw thee sad-eyed, The tears on thy cheeks, While thy raiment was dyed In the Blood of the Greeks. It is the first in a series by Mary Brooks on Eva Muller and Zoe Lambros.

Readers, who enjoy strong female protagonists and an unlikely romance set against the backdrop of WWII and a part of that monumental struggle that isn’t often the focus of historical books, will enjoy this opening novel while looking forward to the continuing adventures of Eva and Zoe.

Grady Harp
5つ星のうち5.0 `And we saw thee sad-eyed, The tears on thy cheeks While thy raiment was dyed In the blood of the Greeks.' - Greek Anthem
2015年4月25日 - (Amazon.com)
Amazonで購入
Australian author Mary D. Brooks made her literary debut with this superb novel in 2001, a novel so powerful not only to her reader but to her own need to explore heritage. She was born in Larissa, Greece and her grandfather related stories of the town occupied by the Germans in WW II - a horrific experience but also a story of courage for those who fought against the Nazis, some losing their lives to save others. When Mary was 10 her neighbor, a survivor of Auschwitz marked with the tattoo shared concentration camp stories. Mary notes, I'm not Jewish and I was not aware of the Holocaust; a child of the 1970′s and blind to what had transpired in the 1940′s. It opened my eyes to what had happened during that time. I discovered the horrific details (if the extermination of six million Jews wasn't enough) of systematic torture of not only Jews and others the Nazis deemed subhuman but the brutality shown to homosexuals. I decided to combine the story of the occupation, the Jews and two brave women who survived it all.' Mary's art has been published in Australian Magazines and she works as a web and graphic designer in addition to being the chief editor and owner of the AUSXIP News and Multimedia Network of sites (AUSXIP Network - Online since 1996 and dedicated to all things Xena Warrior Princess).

Though there have been many novels relating the tragedy of WW II, few have had the courage to concentrate on the Greek aspect. Larissa is one of the oldest settlements in Greece with artifacts uncovered dating at least the Neolithic period (6000 BC). The name means "stronghold" in ancient Greek. It was also the head of the Thessalian League during the Hellenistic and Roman era. Today, it's a modern city and is Thessaly's capital. It was a site of a concentration camp during the war. It is here that Mary places her story, echoing not only the horrors but also the secrets, passions and destinies that define her novel. This we sense in her Prologue April 16, 1941 `Thunder boomed overhead and across the valley as the night sky was lit up with exploding artillery shells in the hills surrounding the small farming town of Larissa, Greece. This once sleepy town was the scarred battlefield between the Allies who were defending the town and the oncoming juggernaut that was the German army. When the Italians tried to invade Greece, the invaders had been defeated. Great jubilation had resulted in a joyous celebration that stretched for days. In the town, the pride over the news that the Italians had been beaten back flourished amidst the sorrow for the fallen. But after the euphoria of the victory against the Italian invaders had faded, the Greek government realized that the Axis powers had not been defeated, only stalled. The government stumbled from one crisis to another, trying to starve off the inevitable. What they feared the most happened in the spring of 1941, a day that many Greeks had been anxiously anticipating for months. The Germans had arrived at the outskirts of Larissa and were raging through the hills and valleys like hungry locusts. The British, Australian, and New Zealand soldiers kept the Germans at bay until they could hold them no longer, and now a retreat was in progress. Burning cars, trucks, and bodies of soldiers and Greeks littered the roadways as the battles continued. A young girl stood outside on a clear night, gazing at Mount Ossa in the distance. The sound of falling shells and the rumble of tanks thundered in the background. Zoe Lambros looked up into the heavens for a long moment.' So we meet Zoe and then Eva - `Eva was Major Han Muller's crippled daughter, a tall, dark haired, blue-eyed young woman of twenty-two. She glanced at her cane, which was leaning against the wall, and shook her head slightly at her predicament... She hated Larissa. She hated the backward villagers who didn't bother to hide their hatred. She knew she would; that wasn't the surprise. She wasn't sure if the villagers pitied her or out rightly despised her on her sojourns outside.'

The story takes place between 1942 to 1947. `In war ravaged Greece under German occupation that was destroying every manifestation of individuality comes the story of two women making difficult choices. They meet under extraordinary circumstances. Zoe Lambros and Eva Muller go through a great deal of hardship but their experiences are entirely different. There is no question they hate each other from the moment they meet. The war is not only surrounding them, but their souls and needs also have to fight a great battle. This beautiful story about sacrifice, pain, broken innocence and love that no one was anticipating. Eva and Zoe must work together and overcome their hatred for each other while facing down their own demons. Hatred turns to friendship as they find common ground while helping Jews escape from the Nazis.' A brilliant visit to a horrible time written with courage to reflect on the suffering of homosexuals whose fate was so often that of the Jews and gypsies and other undesirables in Hitler's mind. Highly Recommended. Grady Harp, April 15
続きを読む
6人のお客様がこれが役に立ったと考えています
レビュー を日本語に翻訳する
Amazon.comのカスタマーレビューを見る(145) 5つ星のうち4.4
click to open popover
Amazonプライム会員ならお急ぎ便、日時指定便が使い放題
さらに、映画もTV番組も見放題。200万曲が聴き放題 。クラウドに好きなだけ写真も保存可能。
> プライムを無料で試す