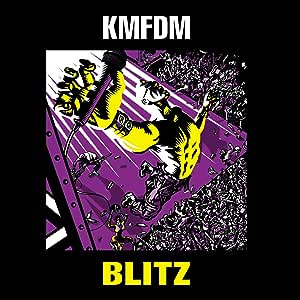 Celebrating 25 years of the ultra-heavy beat, KMFDM proudly announce their 2009 album containing 11 new sonic blasts. Under the direction of founder, leader, and vocalist Sascha K., Blitz is dominated by analogue synthetics with high-powered hooks, singer Lucia lends her vocal power, and the tracks are rounded out by some assistance from the KMFDM line-up of the last half decade: Jules Hodgson, Andy Selway, and Steve White.

Mr. Patrick D. Lindon
5つ星のうち5.0 Another quality album!
2014年5月24日に英国でレビュー済み
Amazonで購入
Been listening to KMFDM for a while now and they certainly know how to keep the standards high with each album they release. BLITZ is no exception, mixing industrial beats with crunching guitars, they really are such a unique band to listen to. This is more a dancy style album but will please fans of their older stuff, such as NIHIL and WWIII all the same. Overall, they've stuck to a formula which has worked for over 20 years now and they are showing no signs of slowing down any time soon, which isn't a bad thing!!
続きを読む
違反を報告
レビュー を日本語に翻訳する

Brendan A. MacWade
5つ星のうち4.0 Best KFMDM Album In Years !
2009年3月30日にアメリカ合衆国でレビュー済み
Amazonで購入
The other reviewers here have done a splendid job critiquing Blitz, the 16th studio album from these industrial rock veterans, and it is apparent that there is something for everyone on this album. Some people love 'Davai', others hate it. For me,this album delivers some of the better elements of previous albums, namely Nihil, Adios, and Attak. This is KMFDM's most danceable work since Adios. But it is also somewhat experimental like Nihil. The results are mixed, but overall, this has to be one of KMFDM's best albums, and IMO it is the best since Attak or Adios.

Blitz is full of great highlights. I think most reviewers would agree that there are two 'duds' on this album, and the best tracks will always be up for debate. Take 'Never Say Never', for example. The hook in the chorus is so massive, the verses might seem very dull in comparison. We've seen a lot of songs recently that rely on huge hooks and boring verses (readers are going to cringe when I say this, but one bloody song I can't avoid on the radio, 'Feels Like Tonight' by Daughtry, is one such song where the chorus is overwhelming and basically becomes the song). 'Never Say Never' is better than that, despite the contrast between chorus and verse. It's like a great Curve or Garbage song with a distinctive, dark KMFDM synth riff.

And then Blitz gets even better. 'People of the Lie' is a refreshingly experimental track - not the most accessible, but lryically superior to anything in WWWIII or Hau Ruck. 'Being Boiled' is an interesting cover of a lesser-known Human League song. 'Bait & Switch' is great. As is '[*]itches', which is another wonderful exercise in irony and mock fanboy hate along with previous efforts such as 'Sucks' and 'Intro'. And the album closes with the extended techno track 'Take'm Out'. All in all, a classic KMFDM album and a refreshingly fun and varied work that is far superior to anything the band has released since it got back together in 2001.
続きを読む
3人のお客様がこれが役に立ったと考えています
違反を報告
レビュー を日本語に翻訳する

InAdidasWeStand31
5つ星のうち4.0 It's got a different flavor and I think I like the taste !!
2011年10月16日にアメリカ合衆国でレビュー済み
Amazonで購入
Let me start by saying if you need something edgy this is your flavor of the month. It doesnt really have the same feel as a normal KMFDM record. But all in all it aint bad and brings a whole new swing on dance dance revolution. You just want to pop this in your ride and take off down the road at 120 mph. So go ahead turn this album up and you will feel it in the back of your teeth just where you need to feel it the most. I only dont really care for two songs but otherwise the album is solid and a must for true Kaptin K fans aboard. So go grab this cd and see if it feels right to you..I doubt there will be any needs to complain.
続きを読む
1人のお客様がこれが役に立ったと考えています
違反を報告
レビュー を日本語に翻訳する
すべてのレビューを参照します
Amazonプライム会員ならお急ぎ便、日時指定便が使い放題
さらに、映画もTV番組も見放題。200万曲が聴き放題 。クラウドに好きなだけ写真も保存可能。
> プライムを無料で試す