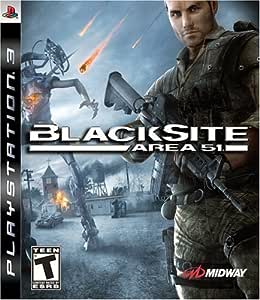 RJ the Great Cat Lover
5つ星のうち4.0 Blacksite: Area 51 PS3
2013年1月8日にアメリカ合衆国でレビュー済み
Amazonで購入
This is an ok game. I had fun with it. It is older, so there are no PS3 trophies.

The graphics are not bad. Characters look pretty good. The colors are a little drab, and the terrain sometimes has piece lines in the ground. The enemies look good.

Sound is ok. Gun fire and explosions are well done. The music is good and the voice acting is solid. There are a few pops in the sound mastering, but they can only be heard with head phones.

The story, overall, is ok but there are a few jumps in it. The story is almost cliche.

FPS play is well done. Aiming and firing is nice and smooth. The assault rifle is used to good affect. There aren't many different guns in the game, but there are few cool heavy weapons to use. Chopping down enemies with a mounted machine gun was fun. The rocket launcher episodes were pretty cool, as was using the sniper rifle.

Overall, I'd give this game around 3.5 or so. Blacksite: Area 51 was pretty good but not great. It's a decent game to satisfy shooter game needs.

DANN
5つ星のうち3.0 Despite the quality issues, still a pretty fun game...
2010年8月8日にアメリカ合衆国でレビュー済み
Amazonで購入
The game, like many other reviewers have noted, is marred by quality issues. When I first inserted the game into my PS3, it asked me to run an update, so I thought perhaps there had been an update put out that took care of some of the quality issues, but unfortunately that's not the case. The game was released in 2007 and despite this being 2010 the game still has the same problems with frame rate speed. I didn't notice this issue so much on the 1st level in Iraq but it was VERY noticeable during most of the rest of the game-play. I did get used to it, however, and a tip for you is when you see the word "loading..." come up on the screen, which it will often and at odd places during the game-play, just stop what you are doing. The game completely froze up on me twice, and I had to reboot it - fortunately I didn't lose anything. But I figured out that if you keep mashing the shoot button or the driving button, etc. while the game is trying to load it will at times cause it to freeze up completely.

Another issue is the driving mechanics for the vehicles. The only vehicle you drive is a Humvee, and it's only on a couple of stages. I typically like driving vehicles in games, it's a lot of fun when the controls are set up properly, but in this game it is by far the worst I've ever seen. It takes considerable time and counter-intuitiveness to keep the damn Humvee on the road!

Despite the games flaws, it is pretty fun to play. Though I did begin to find it quite unimaginative during the later stages of the game. Despite what you are facing, you are pretty much using the same weapons, or jumping on a turret and just mowing down aliens. This was fun in the early stages, but it gets boring after a few hours of game play. And you are basically facing the same aliens/mutants in the second half of the game that you faced in the first half.

The graphics are so-so, nothing that is really impressive, in fact it has more of a PS2 quality to it. But I found many of the environments very well done, though they are not very interactive.

The sound quality is pretty bad. For some reason, at certain stages especially during a boss battle it seemed, the audio will sound as if it is coming out of one channel more strongly than another channel, so it sounds like the balance is out of whack.

I didn't really have a problem with the AI as some others have mentioned. But you can't really expect them to do the bulk of the fighting, they are support only. One of the combat techniques the game recommends is to let your team go in first, then you "mop-up" the rest. But on many stages this doesn't work - the team will take forever to kill something and die and have to respawn. It's much quicker if you just do the killing yourself! And use them as support.

This is probably the shortest play-time of this type of game I've ever played. I estimate it at about 7.5 hours of play time - I played for an average of 1 to 2 hours each night, and beat the game in 5 days. It's also one of the easiest games I've ever played (though I didn't try it on the hardest level) with the only real challenges being the helicopter that you must shoot down with a sniper rifle (about the midpoint of the game) and the final boss, but that one only took me 3 tries, so not really that hard.

Interestingly, the game didn't really remind me much of the Area 51 game that was made for the PS2 (I liked that game much better), this game reminded me more of the old SOCOM games, like SOCOM 3, though you are in FPS. This game has much more of a military-action/shooter feel to it, whereas the Area 51 game more of a Sci Fi feel to it. And your opponents in the game aren't really aliens, but rather mutants - you will understand as the story unfolds.

I'm being a little generous with the 3-stars and overall 6 stars out of 10. Without a doubt this is the most buggy game I've ever played. But despite the significant quality issues, the game is pretty decent overall and I will probably replay some of the early stages for fun.

Robert Merlino
5つ星のうち3.0 Alien shooter
2014年2月5日にアメリカ合衆国でレビュー済み
Amazonで購入
Game is great played it before a long time ago bought it cause I thought you earn achievements but you don't so if your bored and looking for a kool alien shooting game I choose this one
続きを読む
1人のお客様がこれが役に立ったと考えています
役に立った
フィードバックを送信中...
フィードバックをお寄せいただきありがとうございます。
申し訳ありませんが、お客様の投票の記録に失敗しました。もう一度試してください。
違反を報告
レビュー を日本語に翻訳する

W. G. Mccann
5つ星のうち2.0 Outdated game
2010年11月9日にアメリカ合衆国でレビュー済み
Amazonで購入
Too bad this didn't get more time to be developed. Could have been a good game. As it is the game loads slow, freezes and many problems during the game. Waste of money!!!
続きを読む
役に立った
フィードバックを送信中...
フィードバックをお寄せいただきありがとうございます。
申し訳ありませんが、お客様の投票の記録に失敗しました。もう一度試してください。
違反を報告
レビュー を日本語に翻訳する