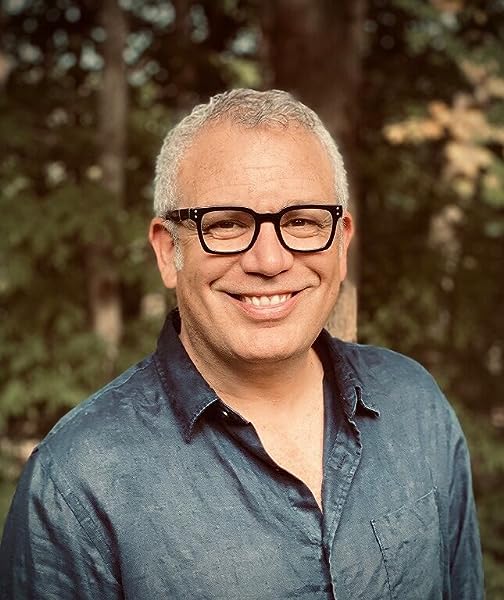 One hot summer night in the city, all the power goes out. The TV shuts off and a boy wails, "Mommm!" His sister can no longer use the phone, Mom can't work on her computer, and Dad can't finish cooking dinner. What's a family to do? When they go up to the roof to escape the heat, they find the lights--in stars that can be seen for a change--and so many neighbors it's like a block party in the sky! On the street below, people are having just as much fun--talking, rollerblading, and eating ice cream before it melts. The boy and his family enjoy being not so busy for once. They even have time to play a board game together. When the electricity is restored, everything can go back to normal . . . but not everyone likes normal. The boy switches off the lights, and out comes the board game again.
Using a combination of panels and full bleed illustrations that move from color to black-and-white and back to color, John Rocco shows that if we are willing to put our cares aside for a while, there is party potential in a summer blackout.
続きを読む
Previous page
Next page

"It started out as a normal summer night"-until the lights go out, citywide. When it gets "too hot and sticky" inside their apartment (no fans or AC tonight), one busy family (mom, dad, two girls and a black cat) heads to the rooftop of their building, where they find light via stars and a block party "in the sky." Other parties are happening down on the street, too. When the lights come back on, everything returns to normal, except for this family, which continues to enjoy the dark. The plot line, conveyed with just a few sentences, is simple enough, but the dramatic illustrations illuminate the story. Beginning with the intriguing cover-the silhouetted family on their rooftop under a vast, dark-blue sky dotted with Starry Night type swirls, black is used as both a backdrop and a highlighter. Page composition effectively intermingles boxed pages and panels with double-page spreads, generating action. Brilliantly designed, with comic bits such as a portrait of Edison on a wall and the cat running from a hand shadow of a dog. Not all young readers will have experienced a blackout, but this engaging snapshot could easily have them wishing for one. Kirkus"

It's a scenario many kids are probably all too familiar with: a young boy wants to play, but older sis is gabbing on the phone, Mom is busy on the computer, and Dad is making dinner. When the power goes out, however, the family comes together to make shadow puppets on the wall, join the neighbors on the roof to admire the stars, and even head out front to the most idyllic city street you'll ever see. All good things come to an end, though. The power comes back on, and everyone immediately slips back into walled-off family units-though the walls are a bit weaker now. Compositionally, this picture book bears a strong resemblance to Maurice Sendak's In the Night Kitchen (1970), breaking some of the pages into comicsstyle panels and running a boxed narrative up top. Rocco's lustrous, animation-quality artwork somehow manages to get richer the darker it gets, and features one of the silkiest skies since Van Gogh's Starry Night. A versatile reminder to take a break and invest in quality together time once in a while. Booklist"

On a hot night in the city, everyone in the family is busy with their own activities-too busy to play with the young girl hoping for a partner in a board game. When the electricity suddenly goes out, however, the busy family slows down; at first "huddled around flashlights and candles" together, they're then driven by the heat to the apartment-building roof, where they discover a power-free block party in progress and a sky full of stars usually bleached out by city glow. Then there's another party down in the street, where the philosophical ice-cream vendor gives her treats away and the firefighters open up a hydrant, so it's a bit of a disappointment when the lights come back on. While the real-life version of this would probably just send the wireheads in the family to their smart phones, it's an enticing premise nonetheless. Author-illustrator Rocco effectively employs the text as voiceover narration ("So we went up and up and up to the rooftop") for the drama that unfolds visually, and the simple, straightforward words, in font recalling In the Night Kitchen and crawled across the full-bleed art or neatly boxed, play their supporting role tactfully. Rocco interestingly goes for solidity rather than ethereality with his visual style: the family is a robust little crew, with authentic touches in demeanor (older sister has a sulky preteen slouch) and in their behavior in the dark (a lot of shadow-puppetry in the flashlight's glow, some opportunistic handholding by Mom and Dad). Colors are understandably shadowy (textured with intriguingly geometric hatching lines), but there's a clever balance of cool and warm in the spreads, and the inventive perspectives and panel sequences keep the energy high despite the late hour. This will be a nice reassurance for kids afraid of the dark, and most audiences will simply relish the notion of a spontaneous old-timey party. BCCB"

Rocco's sublime account of a city blackout reveals a bittersweet truth: it sometimes takes a crisis to bring a family together. In a series of graphic novel style panels, a small child tries to convince family members to play a board game one hot summer night, but they're all too busy. When the lights go out, though, the neighborhood comes alive and the whole family drifts up to the roof to look at the stars: "It was a block party in the sky." Rocco (Fu Finds the Way) gets everything right: the father's pained, sheepish smile when he says he has no time to play; the velvety dark and glowing candlelight of the blackout (as well as the sense of magic that can accompany one); and the final solution to the problem of a too-busy family (a private blackout, courtesy of a light switch). The high-energy visuals that characterize Rocco's other work get dialed back a little. In the most poignant spread, the family sits on the stoop, eating ice cream: "And no one was busy at all." It's a rare event these days. PW"

The view inside this family of four's duplex depicts what might be a typical night for them. The younger child is reaching for a board game, her older sister is talking on the phone, dad is cooking, and mom is working at the computer. When the girl tries to enlist the others to play the game with her, they're all too busy until "The lights went out. All of them." It's a blackout! At first, the family members sit at the kitchen table with a flashlight and some candles; then they head up to the roof for a look at the bright stars against the dark cityscape; and, finally, they go down to the street, where there's a festive atmosphere of guitars playing, free ice cream, and an open fire hydrant. In the end, readers will see that simple pleasures and a spirit of togetherness can be enjoyed even when the electricity comes back on. The colorful pictures work beautifully with the book's design. Rocco uses comic-strip panels and a brief text to convey the atmosphere of a lively and almost magical urban landscape. Great bedtime reading for a soft summer night. SLJ"

John Rocco (www.roccoart.com) has held a wide variety of jobs in his life, from working in the shell fishing industry, to designing attractions for Walt Disney World’s Epcot, to creating illustrations for the DreamWorks movie “Shrek.” Since 2005 his focus has been on creating children’s books, such as Wolf! Wolf!, a Borders Original Voices Award-winner; Moonpowder; and Fu Finds the Way. He has also created the cover artwork for Rick Riordan’s best-selling Percy Jackson and the Olympians and Kane Chronicles series. John and his family live in Brooklyn, New York, where they have experienced their share of memorable summer blackouts.

Ann Norman
5つ星のうち4.0 My preschoolers engaged with this book.
2021年1月6日にアメリカ合衆国でレビュー済み
Amazonで購入
My class of 3-year olds, has a very short attention span, but this book, about a blackout in New York City, really engaged them. They responded to the book by talking about similar things that had happened to them or how they would feel in that situation. They wanted to hear it a couple times, and I think it inspired them in their play. We used the book as part of our unit on light, following online advice from a New York City schools curriculum (I do not live in New York City).
続きを読む
1人のお客様がこれが役に立ったと考えています
違反を報告する
レビュー を日本語に翻訳する

Verdoonie
5つ星のうち4.0 Beautiful illustrations
2012年3月10日にアメリカ合衆国でレビュー済み
Amazonで購入
I ordered this for my school library. It is a Caldecott Honor Award winner for 2012. Most winners of late have been wordless books. I like this one, because it has words that are
important in our technological age. A little girl wants her family to play a board game with her, but everyone is too busy with phones, computers or house chores. There is a blackout
in the city and, because it is a hot summer night, they head to the roof, where other people are enjoying the beautiful night. The go to the street, and people are enjoying each other
and music, etc. Then the lights are restored. Everyone goes back to the way things were, except the little girl. You'll love the ending. My students really enjoyed the story and
the beautiful illustrations.
続きを読む
20人のお客様がこれが役に立ったと考えています
違反を報告する
レビュー を日本語に翻訳する