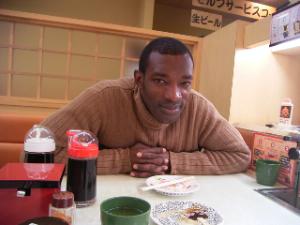 Biankah Bailey
5つ星のうち3.0 Quick, riveting read.
2010年7月8日に日本でレビュー済み
Amazonで購入
If you're a person who wholeheartedly objects to the wholesale sexual exploitation of women, you will really despise the author of this book half-way into it.

If you're a person who believes that women should empower themselves against such exploitation, you will have nothing but contempt for most of the women portrayed in this book.

Whether you fall into either, both or neither of the above categories, you will continue to turn the pages of this book until the last, eager to know what happens to all of these people. The stories will pull you in, in spite of your value judgement. That pull is the power of good storytelling.

The main issue I had with this book had is an editorial one. There were two chapters that I thought were too long where others could have been expanded on more. However, this is an issue that can be ironed out with revision. A good first attempt.

Amazon Customer
5つ星のうち5.0 Awesomeness
2016年3月31日に日本でレビュー済み
Amazonで購入
Craziest book I have ever read. Diggs into the Japanese culture, the psyche of both the women and men. Most definitely not for the faint-hearted
続きを読む
役に立った
コメント 違反を報告
レビュー を日本語に翻訳する

Amazon Customer
5つ星のうち5.0 Dave's Review
2010年3月10日に日本でレビュー済み
Amazonで購入
This book was really good. I enjoyed reading it to the very last word. I actually felt sad when the book finished and wanted it to go further.

Some of the stuff in it seemed unreal, I guess because my experience in Japan after nearly 2 years is a little far from what Stefhen experienced (I wish I had some of those experiences actually). I however see slight similarities with what he experienced and that of my own. Especially with his dilemma with Azusa and Shoko... However, unlike his case, the 2 girls basically ditched me (for 2 different reasons), never to be seen or heard from again (so far). None of them chose to stick around.

Since reading this book however, I have been having endless dreams of moving to the Kobe area. Stefhen's life has been some what of an encouragement to me, as much as we are on different sides of the fence, as I do believe in a creature in the Christian sense.

APS
5つ星のうち5.0 Black Passenger Yellow Cab
2010年11月20日に日本でレビュー済み
Don’t let the title of the book fool you! It’s not just a book of sexual escapades. As a resident of Tokyo for nearly a decade I can say from personal experience that his tales are very likely to be true. But it isn’t a book for “Men Only”. What makes this book a must read is the RAW data that he has culled from Japanese governmental agencies and national publications that give behavioral insights into the Japanese people that will have some reeling in HORROR. Read it, and your jaws will drop as the light from ‘The Land of the Rising Sun’ DIMS more than just a little.

Jay
5つ星のうち5.0 A great read and brutally honest
2011年2月18日に日本でレビュー済み
When I first picked it up, I really didnt know what to expect. He writes it as it was with amazing honesty. I almost felt Stephen made absolutely no attempt at being politically correct - it was like a breath of fresh air. Living in Japan myself, I see firsthand some of the behaviors, stories, and females he writes about in his book. His observations on the culture are spot on - its a downward spiral that many people here cannot seem to escape. I HIGHLY recommended this book to anyone who can keep and open mind - you wont be able to put it down.
続きを読む
2人のお客様がこれが役に立ったと考えています
役に立った
コメント 違反を報告
レビュー を日本語に翻訳する
すべてのレビューを参照します

However, reading the sex for titillation misses the point of the book and indeed the sex, though explicit, is more humorous (the author has a lovely way with words) than erotic. The book is stronger as an ethnography and a memoir. It gives a searing criticism of a patriarchal Confucian society, where just below the gloss of a developed high-tech country is a desperately unhappy and emotionally immature medieval society obsessed with duty rather than rights with many of its women (and men to a lesser extent) damaged by a combination of poor parenting as children, overwork, endemic sexism and bullying. And reading about intrafamilial murders almost every day in the Japanese news (I live in Tokyo), the very low rankings Japan gets in international comparisons of gender equality, and the current government's desire to rewrite the constitution to focus on duty to the country, it's extremely difficult to fault his conclusions, although from my experience, these days Japanese fathers are a lot more involved in childraising than he claims.

The book succeeds admirably as a memoir. As well as his time in Japan, we are treated to some of his earlier life in America and a jaw-dropping account of his impoverished childhood in Jamaica - at four, he had thoughts of suicide, he was sexually active from eight, and he was brought up in a church commune surrounded by threats of hellfire. The book does go on a bit, and I found myself getting impatient waiting for him to make the sensible and obvious decision about which of two women he was going to settle down with, but this is an autobiography (and a very honest and self-critical one), not a work of a fiction, so that can be overlooked.

Small flaws aside, this fully deserves five stars for tackling the issue of western men/Japanese women relationships with such perception, self-awareness and humour. I've read many books on Japan from a westerner's perspective and this is up there among the best of them.

Finally, I first heard about the book by bumping into the author himself, eight years after he wrote the book, on a train in Tokyo. He's doing well and is still happily married.
続きを読む
違反を報告
レビュー を日本語に翻訳する

Jisnimble
5つ星のうち5.0 Addicted to yellow
2012年7月21日に英国でレビュー済み
Amazonで購入
Black Passenger Yellow Cabs is so much more than a travel book, or a memoir or even a seducer's diary: Stefhen Bryan has combined all these forms to create something new. Classic travel books tend to avoid any discussions of personal sexual experience while abroad (it's almost as if the traveller was a eunuch); whereas memoirs tend to avoid discussing sociological and ethnographic ideas too deeply (it's all about me me me); likewise any book concerning what we call "game" i.e. men bedding women at an industrial rate, usually has no discussion of sex addiction and the main writer is invariably such an alpha male he never once admits that he pines for a girl or feels empty after his thousandth shag.

This book has taught me so much about Japanese and Jamaican culture that I either didn't understand or naturally excused (for example the effect of childish Manga culture has on the wider society). In this book Bryan persuasively examines and critiques both societies for their social, cultural and economic failings.

To my mind it is a test of a good book if you want to re-read it as I plan to do.

K. A. Gyimah
5つ星のうち5.0 An amazing & addictive read
2013年5月9日に英国でレビュー済み
Amazonで購入
Found this book to be highly captivating but at the same time educational on cultural differences. I found this book insightful and damn right honest on the state of mind men of all red blooded males of all colours and races. This book keeps it real on how culture plays a key role in our individual lives. It also takes you on an amazing journey of a man who under normal circumstance would've normally died by his 20th birthday. I recommend this book to all, simply a good read.
続きを読む
違反を報告
レビュー を日本語に翻訳する

CLilly
5つ星のうち5.0 Brilliant book, there's nothing else like it
2017年1月12日にオーストラリアでレビュー済み
Amazonで購入
Brilliant book, there's nothing else like it! An absoloutely honest view into the author's mind, about philosophy, culture, and casual sex. There were times when I disagreed with things they said and other times when I felt they hit the nail on the head. But one thing we can both agree on is that this is raw truth from perspective on paper, and there's nothing I enjoy reading more. Excellent!
続きを読む
違反を報告
レビュー を日本語に翻訳する

Ben Sandford
5つ星のうち4.0 Interesting read
2014年5月17日にオーストラリアでレビュー済み
Amazonで購入
enjoyable read but tends to be a bit long on cultural discussion- would recommend it to someone who is interested in japan, I would say the author is a natural storyteller- the experiences are from his own life so storytelling might be the wrong word, but very enjoyable
続きを読む
違反を報告
レビュー を日本語に翻訳する
すべてのレビューを参照します
Amazonプライム会員ならお急ぎ便、日時指定便が使い放題
さらに、映画もTV番組も見放題。200万曲が聴き放題 。クラウドに好きなだけ写真も保存可能。
> プライムを無料で試す