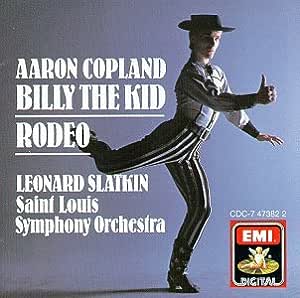 Leonard Slatkin, who has done such outstanding service for American music, upholds the Copland tradition with potent, sympathetically argued accounts of the big ballets. The performances by the Saint Louis Symphony could hardly be bettered, and the recordings stand out for their solid sound as well. Slatkin does both Billy the Kid and Rodeo in full, restoring some delightful music in both scores that is missed when only the suites are presented. In Rodeo, for example, it comes as a delicious surprise to hear the Saloon-piano interlude before the "Saturday Night Waltz"--and Slatkin insists on an out-of-tune upright--just the right touch. These are idiomatic, persuasive accounts, thrilling in their buildups and potent in their climaxes. Even Appalachian Spring is done in full, though in its version for full orchestra. The treatment here is gentle, and while Slatkin generates less voltage than Bernstein, his reading has nobility and an engaging warmth. The recordings were made at a rather low level, but have a wonderful ambience and extraordinary dynamic range. Unfortunately, the individual scenes of both Billy the Kid and Appalachian Spring are not separately banded. --Ted Libbey

GUTMAN
5つ星のうち5.0 Dynamic Slatkin
2013年9月22日に英国でレビュー済み
Amazonで購入
I only bought this CD for one reason.
I had played the copy I first bought years ago so many times that I had to turn the volume right up to appreciate it!
By far the most arresting version of the complete ballet music from 'Billy the Kid', while the performance of 'Rodeo' is guaranteed to blow your socks off.
One of my most treasured possessions.
The only drawback is that the sound quality in Copland's own rendition of 'Billy the Kid' with the LSO is breathtaking and slightly superior to that of Slatkin.

Jorge
5つ星のうち5.0 The 'American' Music Of Aaron Copland!
2018年3月20日にアメリカ合衆国でレビュー済み
Amazonで購入
What is 'American' music? Aaron Copland wrote in 1941 "Because we live here and work here, we can be certain that when our music is mature it will also be American in quality. American individuals will write 'American' music." Is it just music that has an 'American' character? We have Stephen Foster (called by some the "Father of American Music"), Ragtime, the African-American spirituals of the Old South, Jazz, the Tin Pan Alley and Broadway of Irving Berlin and Cole Porter, George Gershwin's 1920's and the twang of the County Western guitar. Between 1938 and 1944 Aaron Copland composed his three ballets on American themes; 'Billy the Kid', 'Rodeo' and 'Appalachian Spring'. In this recording we have the two 'Westerns', both in their complete scores, rather than in the more commonly known 'Suites' that Copland ultimately composed for both. These entered the orchestral repertory more than eighty years ago and remain so today. Perhaps an 'American' Mid Western city's symphony orchestra, the Saint Louis ensemble, is a more appropriate choice for performing these special 'American' compositions. Leonard Slatkin and his forces do not disappoint and are really exhilarating! He brings an exciting energy to these pieces and uses a 'honky-tonk piano' and a real 'pennywhistle' instead of the piccolo for special authenticity. (Program Notes in part Richard Freed)
続きを読む
違反を報告
レビュー を日本語に翻訳する

M. Bishop
5つ星のうち5.0 Great Presentation
2016年11月2日にアメリカ合衆国でレビュー済み
Amazonで購入
The presentation of the ballads by Aaron Copland, Billy the Kid and Rodeo by Leonard Slatkin and the St. Louis Symphony Orchestra (SLSO) are excellent. Copland is a quintessentially American composer, and that quality in his music comes through expertly by Slatkin and the SLSO here. The music is full of life and it scintillates with unabashed Americana here. The percussion plays a key role here in the Billy the Kid ballad, and the percussive elements are highlighted to perfection. The sound quality is excellent as well; the piano movement in rodeo is a take from a western bar room scene and is well presented. All said, I highly recommend this album to those desiring an excellent presentation of the complete ballads of Copland’s Rodeo and Billy the Kid.
続きを読む
違反を報告
レビュー を日本語に翻訳する

David Saemann
5つ星のうち5.0 Sterling
2009年2月8日にアメリカ合衆国でレビュー済み
Amazonで購入
It is great to hear the complete scores of these two ballets. There is little doubt that Copland knew what he was doing when he prepared the two suties from these ballets, but all the music is good and there is much to be said for hearing the greatest hits from these two scores in their proper proportions. The 1985 sound engineering on this disc is almost demonstration quality. The producer was the excellent, lamented Joanna Nickrenz (whose daughter is the pianist of the Eroica Trio). A then state of the art JVC digital recorder was used, and microphoning seems to have been kept to a minimum. The result is beautifully balanced sound, with a terrific dynamic range. The sound does great justice to Slatkin's interpretations. He has a wonderful sense of the French quality of these scores in the spareness of their orchestrations and the elegance of the melodic writing. Those accustomed to Bernstein's high voltage performances may find Slatkin somewhat subdued. Nevertheless, Slatkin's take on this music really grows on you, and I think it is the best approach for repeated listening. The playing of the St. Louis Symphony, as an ensemble and by the first chairs, is simply outstanding. If there are essential Copland recordings, this CD is one of them.
続きを読む
5人のお客様がこれが役に立ったと考えています
違反を報告
レビュー を日本語に翻訳する